Tenure mixing, and mixed income communities have become an essential component underpinning residential development in Scotland. Policies aimed at achieving tenure diversification have been introduced in response to ongoing issues of geographically concentrated poverty, social exclusion and a lack of affordable housing.

Tenure diversification within new developments seeks to address these problems through the aspiration that high income earners in an area will provide support to less well-off members of society, thereby allowing social mixing, reducing concentrated poverty, and minimising prejudiced views. Evidence that has informed this thinking has been widespread from research completed by the Joseph Rowntree Foundation (JRF)[1], The Scottish Government,[2] and GoWell[3].

The belief that mixed tenure developments will address social issues comes mainly from the acknowledgment that in areas in which majority of the housing tenure is socially rented there are higher levels of violent crime, lower educational attainment and poorer health. Shown below are the general proposed benefits of mixed communities found throughout my research: 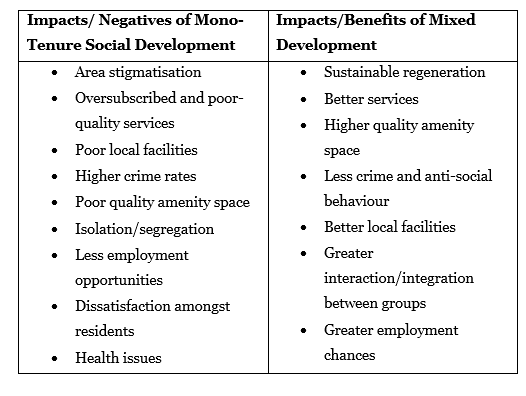 Across the UK, the promotion of tenure diversification has been undertaken largely through planning policy, which has been implemented at both national and local level. Within Scotland this aim is promoted through Scottish Planning Policy (SPP).

To achieve these goals the SPP makes several provisions. Firstly, to achieve affordable housing but also promoting mixed tenure communities, Section 75 agreements are implemented. Like Section 106 agreements in England, these agreements work as a method of securing developer’s contributions through the planning system. In 2008 the Scottish Government published a revision to ‘Scottish Planning Policy SPP3: Planning for Homes’[1], which sets a benchmark of 25% affordable units for any development of more than 12 units

The SPP also sets out broad objectives to achieving mixed tenure stating that “development plans should encourage the creation of mixed communities rather than single-tenure developments. As far as possible, tenure of housing should be indiscernible from its design, quality or appearance.”[2]

But have these policies influenced how people and places relate to each other and are residents mixing?

Firstly, the policies and objectives set out in the SPP aren’t particularly strong e.g. ‘opportunity for the creation of mixed communities will not necessarily be applicable to every site’[3] meaning limited weight may be attached to ensuring these policies are actively achieving their objectives.  Also without clear cut policies it makes it difficult to review their success.

Additionally, evidence on the success of mixed tenure communities in creating social mixing is difficult to ascertain and is often mixed and variable, differing between studies. These difficulties are acknowledged by key advocates JRF.

Research highlights from the works such as GoWell and others such as Bond et al[4] and Sautkina et al[5] show that that social mixing within these communities is predominantly at a superficial level and social integration is, in most cases, down to individual preferences and not as a product of their environment. Social mixing is much more successful between school children due to the fact they do not hold preconceived ideas of social mixing.

Furthermore, wider geographical stigmatisation is often reproduced on a smaller scale within these developments. This can lead to blocks or areas of development being stigmatized due to the type of tenure within them. This is often related to home-owners’ expectations about whether or not landlords are likely to address antisocial behaviour by, or perceived to be caused by, social housing tenants.

A common result of regeneration and mixed tenure policies is the loss of social networks which can be vital to people’s livelihoods. As affordable units can come forward through any new development this can lead to existing social networks being spread all over a city.

Some mixed tenure schemes are significantly more successful than others and this often directly relates to the quality of design (ensuring a strong tenure blind approach) and the range of tenure types and sizes of properties available. A good example of this in the Pennywell urban regeneration project in Edinburgh which has a mix of detached, semi-detached and low-rise flats for private sale, social rent and mid-market rent.