Keeping up the pace: What does the new Standard Method mean for the South West?

The Government’s White Paper “Planning for the Future” was released last week, which outlined the planning reform proposals for England, aimed at delivering a "significantly simpler, faster and more predictable system”.
Alongside this is a consultation on “Changes to the current Planning System” which aims to continue the simplification of local housing need calculations through revisions to the Standard Method. The new methodology is out for consultation until 1 October 2020.

Doffing the cap to change

The revisions to the standard method very much ‘doffs the cap’ to the current approach to increase housing supply but seeks to better achieve a ‘fair share’ approach by boosting housing numbers in areas with low projections and putting greater emphasis on the uplift for affordability. An approach which is welcomed.
The new standard method now proposes to yield 337,000 homes a year nationally which is higher than the current figure of 270,000 and a step change towards the Government’s 300,000 homes a year ambition. It follows a similar approach to the current method, but with some important changes:

What are the implications for the South West?

The total South West housing requirement has increased from 27,379 houses to 36,804, an increase of 34% on the previous Standard Method target. This is just below the national average change of 35% and sits well below the rate of growth for London, which would see a 67% increase. Furthermore, some of the South West’s LPAs would see significant falls in their requirements under the proposed revised Standard Method. Bournemouth, Christchurch and Poole will see a significant fall (-32%) compared to the current methodology; as well as falls in West Devon (-13%), Gloucester (-12%), South Somerset (-11%), Torridge (-1%) and Cheltenham (-1%). Indeed, Bournemouth, Christchurch and Poole would see the second largest absolute reduction of any local authority in the country with a reduction of 852 dwellings per annum (dpa) from the current Standard Method.
Figure 1: Change in housing requirements from current standard method to new standard method 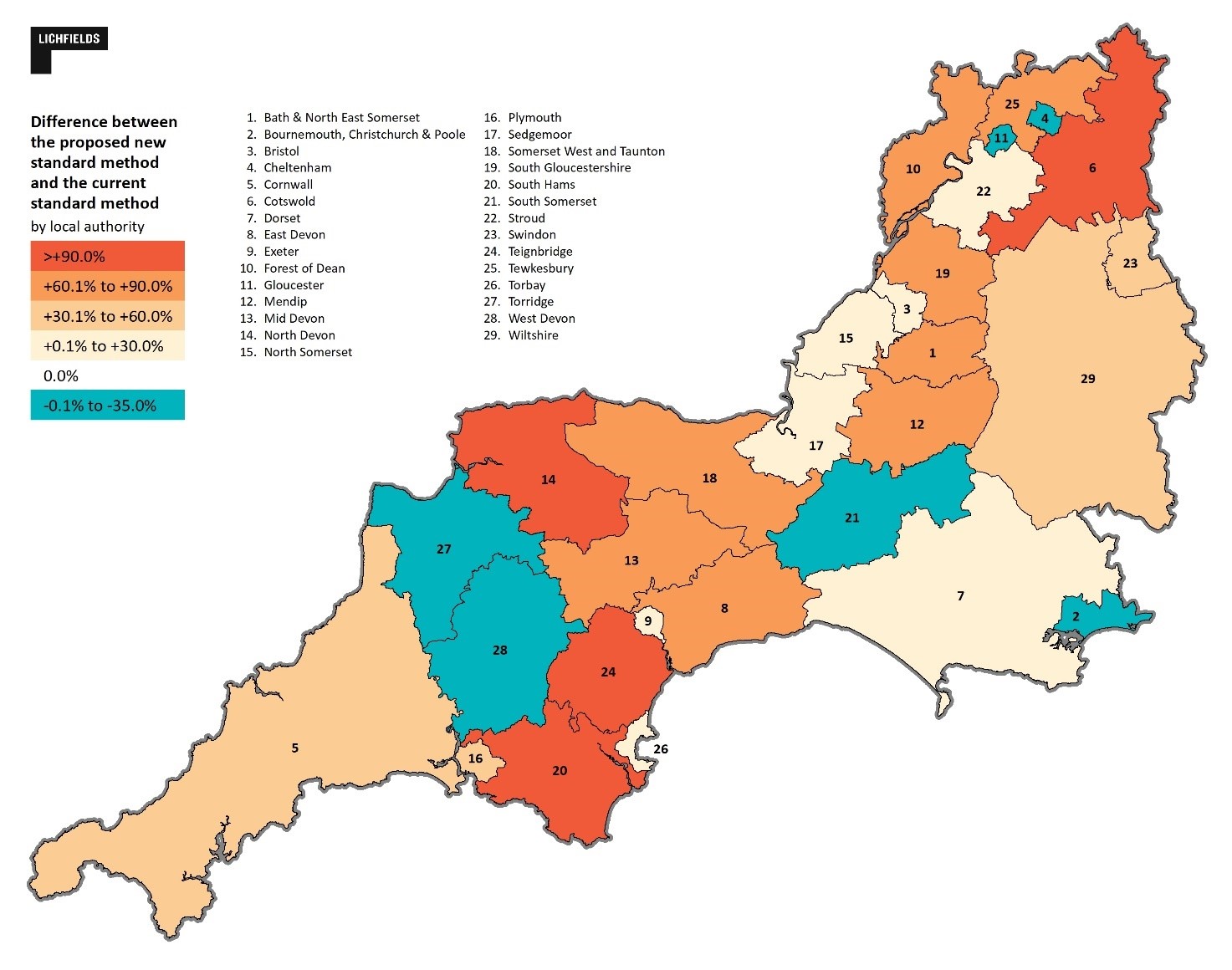 However there are significant increases with Cotswold seeing a 148% increase (722 dpa), South Hams at 117% (414 dpa), Teignbridge at 102% (774 dpa) and Cornwall with a smaller percentage increase at 44% but a larger absolute increase at 1235 dpa. Clearly, the proposed standard method would have major implications across the South West, with a number of authorities facing the prospect of significant changes in their minimum requirements. Under the current method, 53.2% of the national requirement is located in London, the South East and the South West. Under the proposed method this rises to 67.4% and there will therefore be significant pressure for the South West to delivery its share.
Table 1: South West LPA breakdown 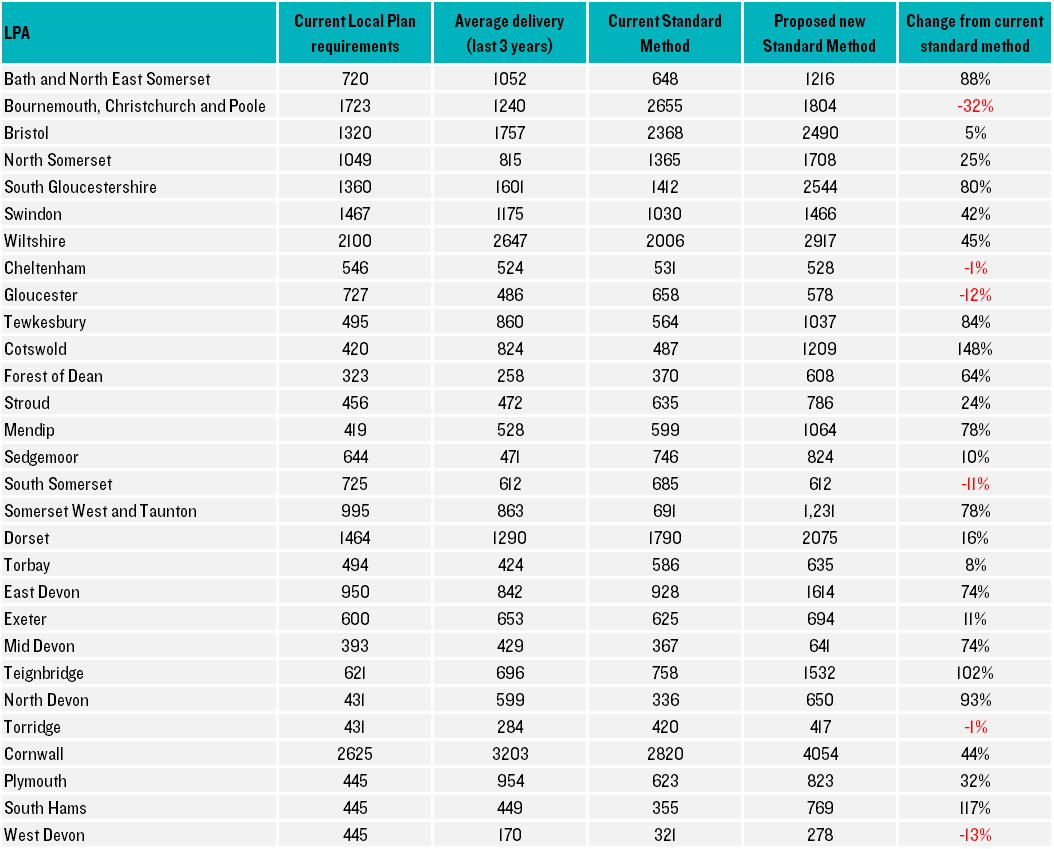 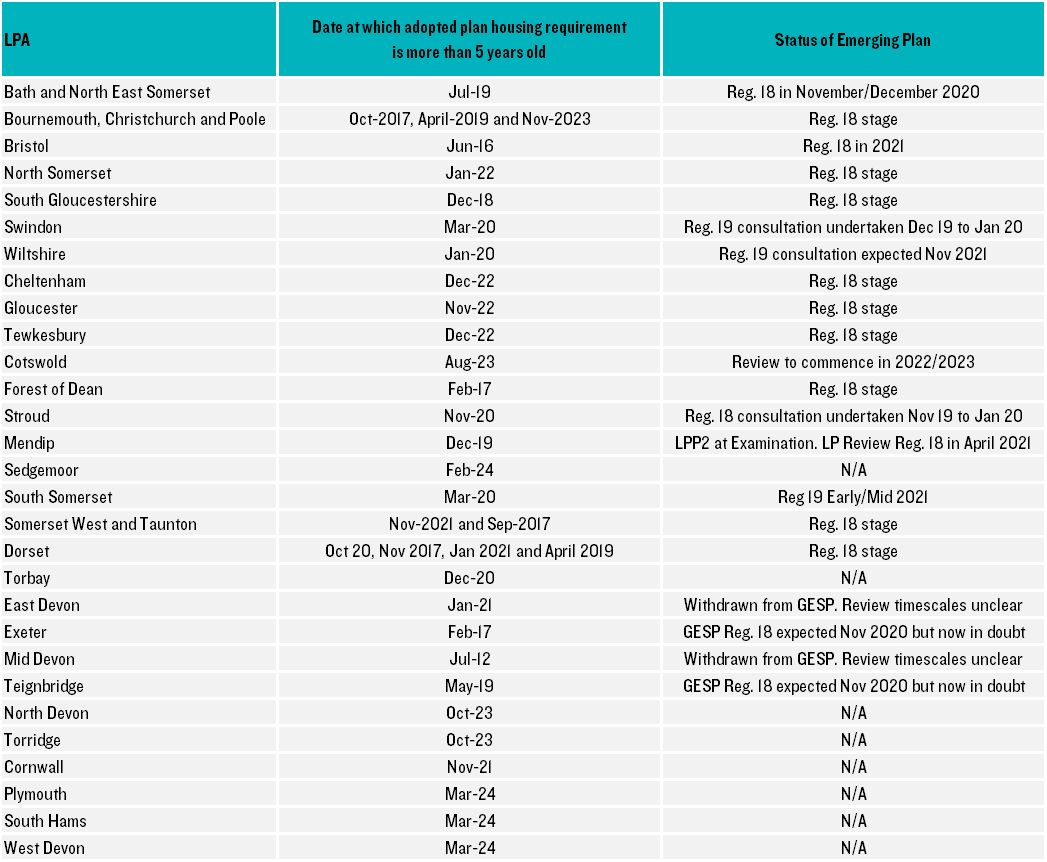 In addition to those LPAs which are currently consulting on emerging Local Plans, the effects of the revised standard method could be felt at any future Local Plan reviews undertaken prior to the wider reforms in the White Paper coming into force.
Some authorities will no doubt press on with their plans at pace including Swindon who will be keen to get their plan to Examination given the 42% increase under the proposed new standard method. Whilst Cotswold with its 148% increase, the largest in the South West, has a recently adopted plan which is likely to allow them to bypass the interim standard method, with the next plan likely to be completed under the new planning reforms.
In the West of England, whilst North Somerset is expected to press ahead of the other four authorities, the joint evidence base on housing numbers currently in preparation will inevitably be impacted by the proposed changes and the new Spatial Development Strategy will need to grapple with these issues. There are large potential increases for South Gloucestershire (+80%) and BANES (+88%) which will be a step change for those authorities, especially the latter given the additional development constraints.
The confusion over the Greater Exeter Strategic Plan with East Devon recently withdrawing from the process and Mid Devon not withdrawing but proposing a new form of GESP instead casts major uncertainty about the timescale for their respective new plans and the progress of Exeter’s and Teignbridge’s reviews. The new changes will have a direct impact on three of those authorities with an increase under the proposed new standard method by 74% in East Devon; 74% in Mid Devon; and 102% in Teignbridge.
The revised standard method could prove useful for any developers pursuing 5 year housing land supply cases where the adopted requirement is more than 5 years old. The reduced requirement in South Somerset will result in the opposite effect for 5 year supply analysis and could indicate benefits to pursuing a 5 year supply case quickly in that LPA, before the revised method is enshrined in formal guidance.
As always, there is a wide variety of situations across the region but this also provides plenty of opportunities for further site promotion.
For implications of what the New Standard Method means for other regions, see below perspectives:
London   |   North West   |   Thames Valley   |   West Midlands   |   Yorkshire and The Humber