I sit writing this blog on the eve of the Greater Manchester Mayoral election, thinking about who to vote for and having read through the election material delivered to my house, all candidates are consistent in their aspirations to ‘preserve the Green Belt of Greater Manchester’.

On this issue alone, it would appear that no candidate is willing to face up to the issues constraining housing land supply in Greater Manchester and the almost universal lack of up-to-date plans across the conurbation (including Stockport).

The lack of available housing sites (evidenced by the recent Housing Delivery Test scores, with 6 of the 10 GM districts failing the test, and the supply issues set out in the Councils’ published housing land supply positions), and the absence of up-to-date Local Plans is undermining the positive and planned growth of Greater Manchester. It represents a huge missed opportunity to help address the widely acknowledged housing crisis, securing contributions towards infrastructure provision and boosting Council finances through the receipt of New Homes Bonus payments to mention but a few benefits.

Following on from our series of blogs on the Greater Manchester Spatial Framework, which was released in October 2020 prior to the Plan being undermined by Stockport’s decision to withdraw at the 11th hour, progress on a Plan for all Greater Manchester authorities continues to be significantly delayed with no definitive timetable for its release.

Despite the lack of coverage of up to date Local Plans for the majority of Greater Manchester authorities, the drive towards getting the next iteration of the Plan prepared and released for consultation appears to be lacking and the Mayor has not been able/prepared to move it forward in his 4-year tenure to date. 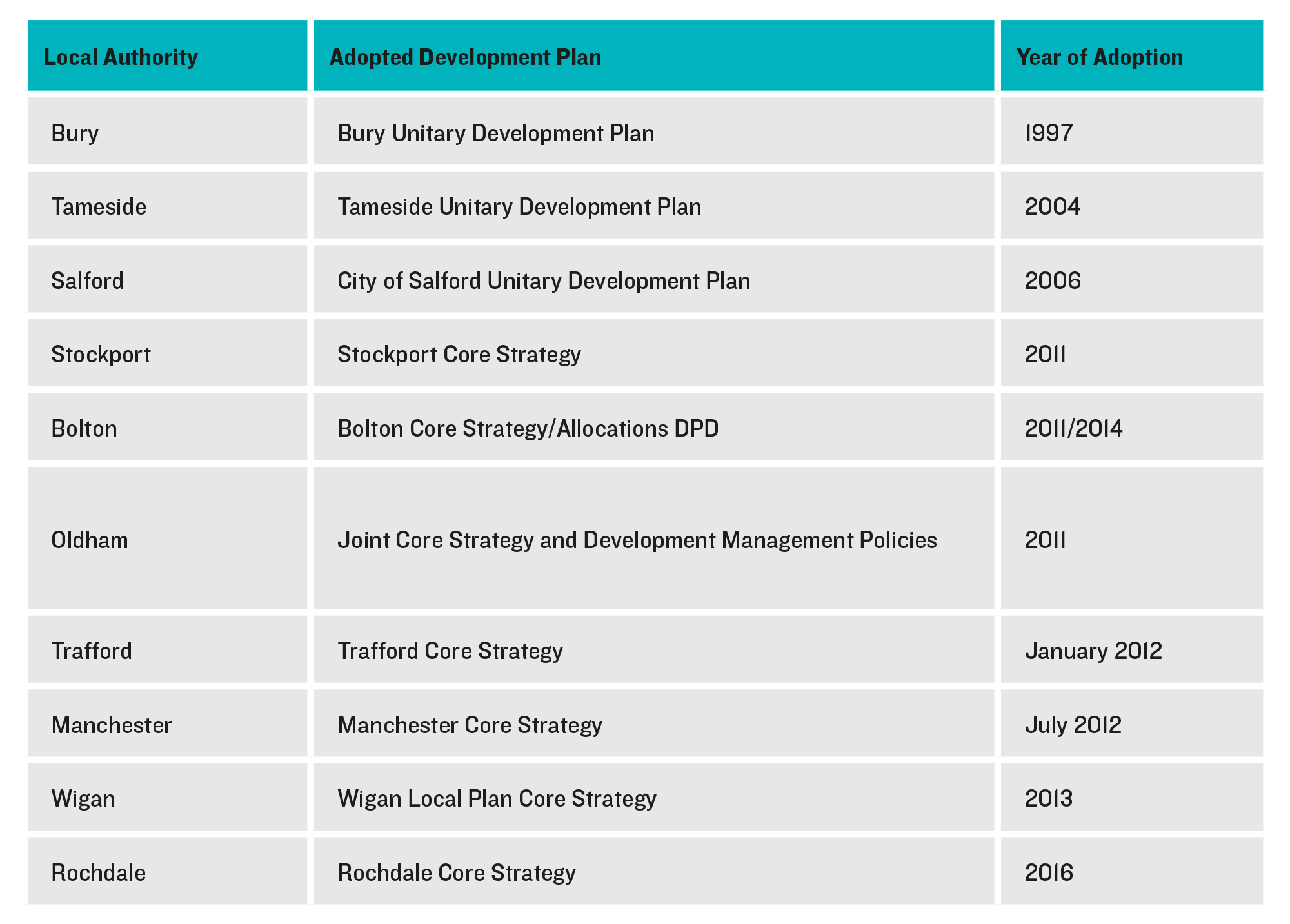 The reason for the most recent delays could be down to the lack of appetite for releasing a contentious Plan so close to the aforementioned Local and Mayoral elections. However, the delay caused by the move to a Plan of Nine (to be known as ‘Places for Everyone’) offers the GMCA the perfect opportunity to address the obvious deficiencies in the previous iteration of the GMSF (October 2020).

From a housing perspective, there are 10 key issues with the previous iteration of the Plan which need to be addressed before a sound plan can be adopted in Greater Manchester. I have summarised each of the issues below:

1) A Higher Housing Requirement – Greater Manchester needs to plan for a level of housing well above the Standard Method 2 minimum starting point to align with the growth strategies and economic development opportunities in Greater Manchester. This would improve affordability of housing across the conurbation. The last version of the GMSF was also planning to deliver less than the minimum housing requirement figure derived using the Standard Method 2 figure; 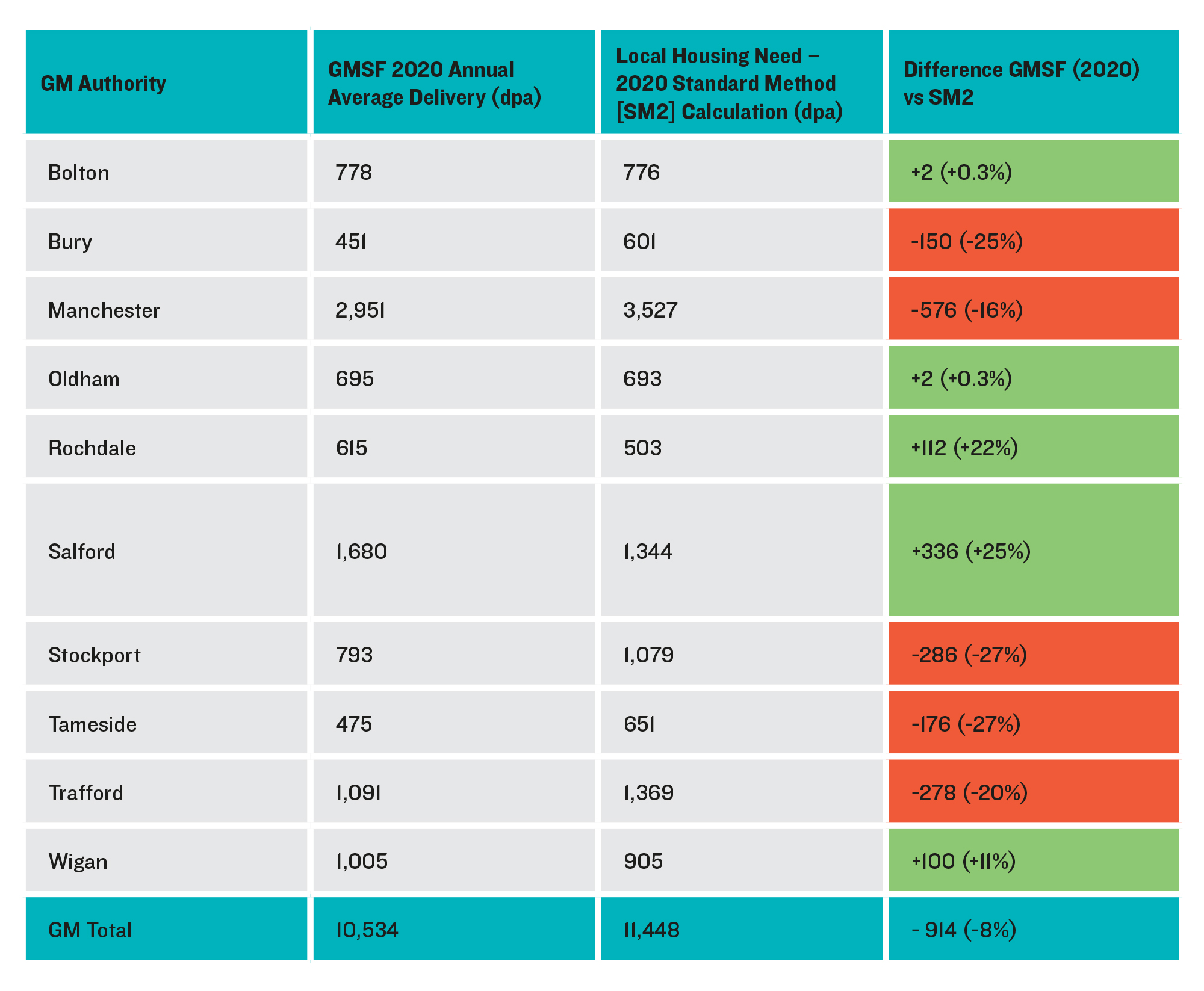 2) Greater Manchester is not a Single HMA – the ‘Places for Everyone’ plan needs to recognise the reality that the GM sub-region comprises of a series of overlapping Housing Market Areas, which should be reflected in any proposed redistribution of the Standard Method 2 figure (for example, Trafford’s housing need cannot be catered for by increasing delivery in Rochdale as there is a weak migratory relationship between the two);

3) Housing Land Supply and Phasing Concerns - there is considerable uncertainty in relation to the deliverability of the claimed 176,665 homes over the plan period and in particular the backloading of the housing requirement will further exacerbate the immediate affordability issues being presently experienced by continued under delivery of homes to meet current needs; 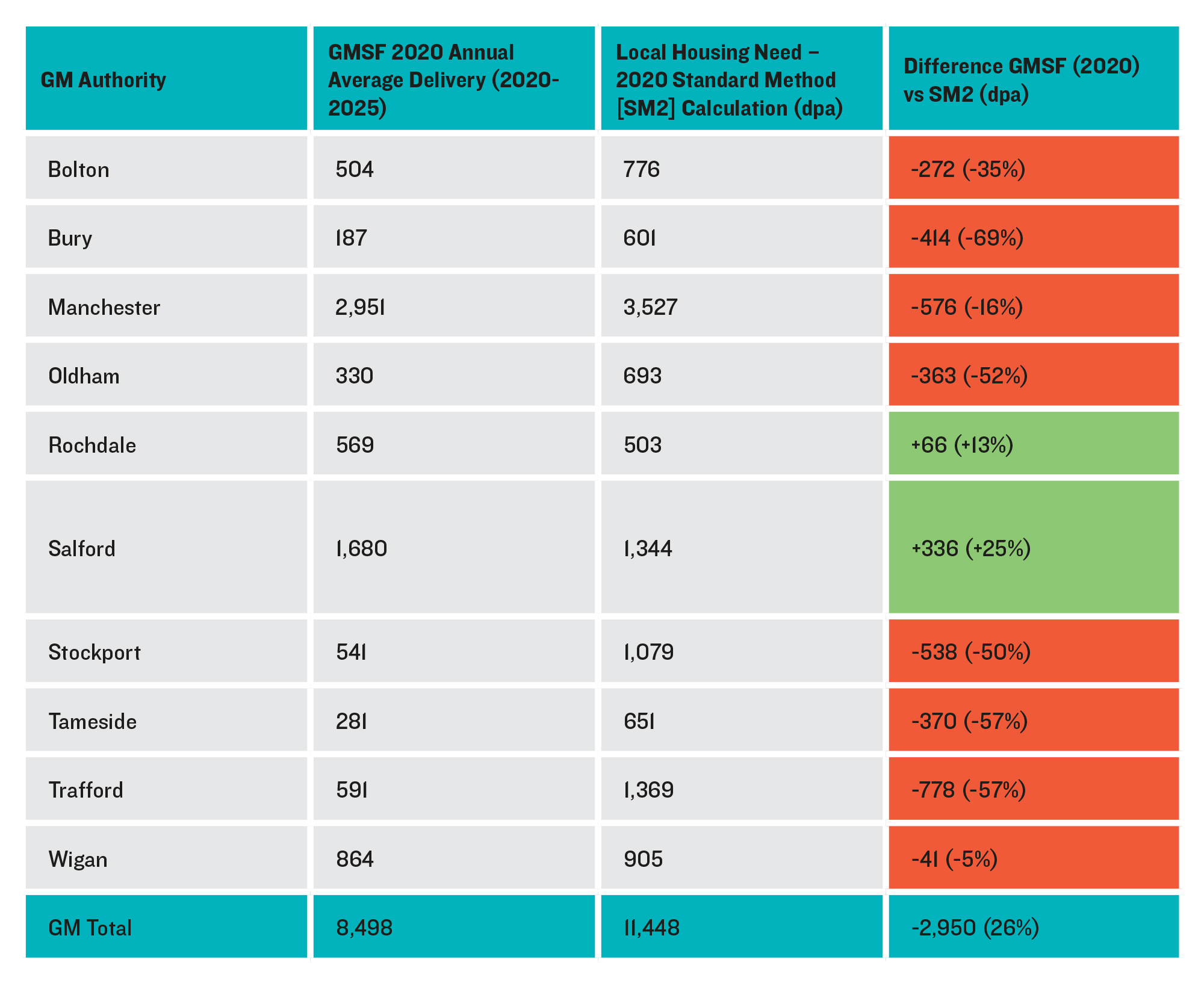 4) Diversity of Supply - a significant proportion of the claimed supply across the conurbation comprises high density apartments in the urban areas, but no analysis has been undertaken to determine that this will cater for needs particularly for family homes and affordable housing and for the changing attitudes and requirements of home working;

5) Social Infrastructure Provision - although the majority of the housing proposed in the Greater Manchester Spatial Framework (2020) is located in the existing urban areas, no provisions were in the plan to cater for the increased requirements on education contributions or open space and play provision as well as other social infrastructure requirements;

6) Worsening Affordability - nine of the ten Greater Manchester authorities have experienced worsening affordability since 2014 when preparation of the Greater Manchester Spatial Framework commenced. Stockport and Trafford are the least affordable areas, whilst Trafford's is the worst in Northern England yet neither is seeking to take positive steps to address this issue 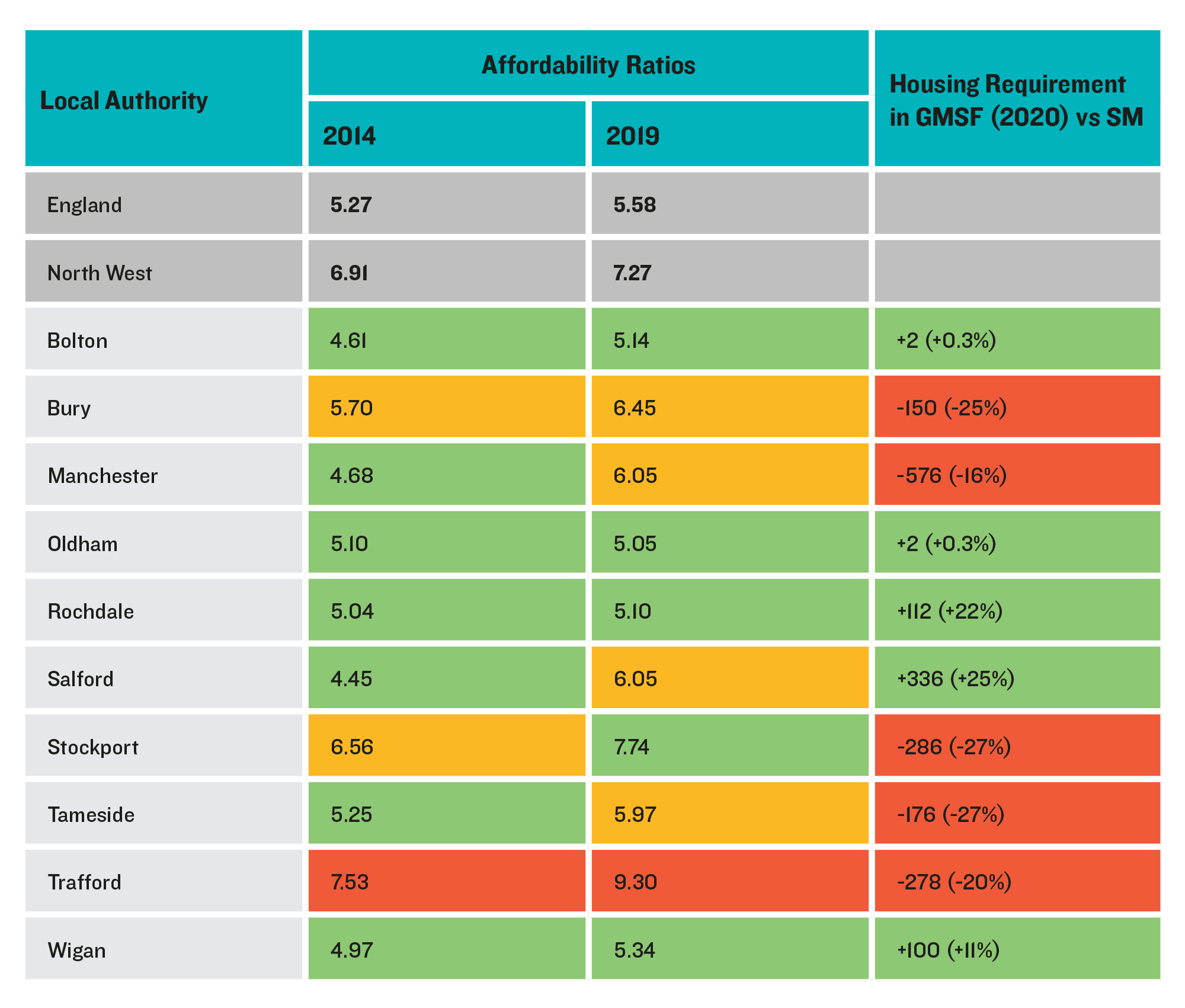 7) Delivery of Affordable Housing - the GMSF sets out a ‘desire’ to deliver 50,000 affordable units over the plan period but the provision set out in the plan will not deliver anywhere near that number particularly bearing in mind that the emphasis in the Plan is to deliver the majority of growth on brownfield sites which in the past have not delivered the required rates of affordable housing;

8) An Inconsistent Evidence Base - the evidence base underpinning the GMSF (2020) is haphazard and does not follow a consistent approach. For instance, no consistent methodology is applied to the preparation of Housing Land Availability Assessments and the justification and evidence base documents to demonstrate the developability of the strategic allocations varies considerably;

10) Stockport - Stockport's withdrawal from the process at the 11th hour is problematic for the continuation of the GMSF. Stockport Council and the remaining 9 Greater Manchester authorities need to work cooperatively to prepare their respective plans and the remaining nine authorities preparing the Places for Everyone Plan and cannot simply 'cut Stockport adrift' as it remains an integral part of the city region.

Significant issues with the Joint Development Plan for Greater Manchester need to be positively addressed immediately or continued delays are likely with the preparation of the Plan.

There is considerable risk that the plan in its current form could be found unsound at Examination and the Greater Manchester authorities would be back to square one having wasted at least 7 years on trying to prepare a joint development plan.

The next elected Mayor of Manchester will undoubtedly have to grapple with the issue very early in their tenure. However, despite all candidates’ aspiration to protect the Green Belt, it is unlikely that a sound plan can be delivered without strategic release of some sustainable sites across the conurbation to meet identified housing needs. Although the release of Green Belt is always a contentious and emotive issue, it is imperative that the current paradox of aggregation is overcome, to positively address the immediate housing crisis in Greater Manchester.

Continued failure to plan positively will further exacerbate the housing crisis in the sub-region and will undoubtably have profound economic and social issues on Greater Manchester’s residents.

GMSF and the coronavirus ‘new normal’