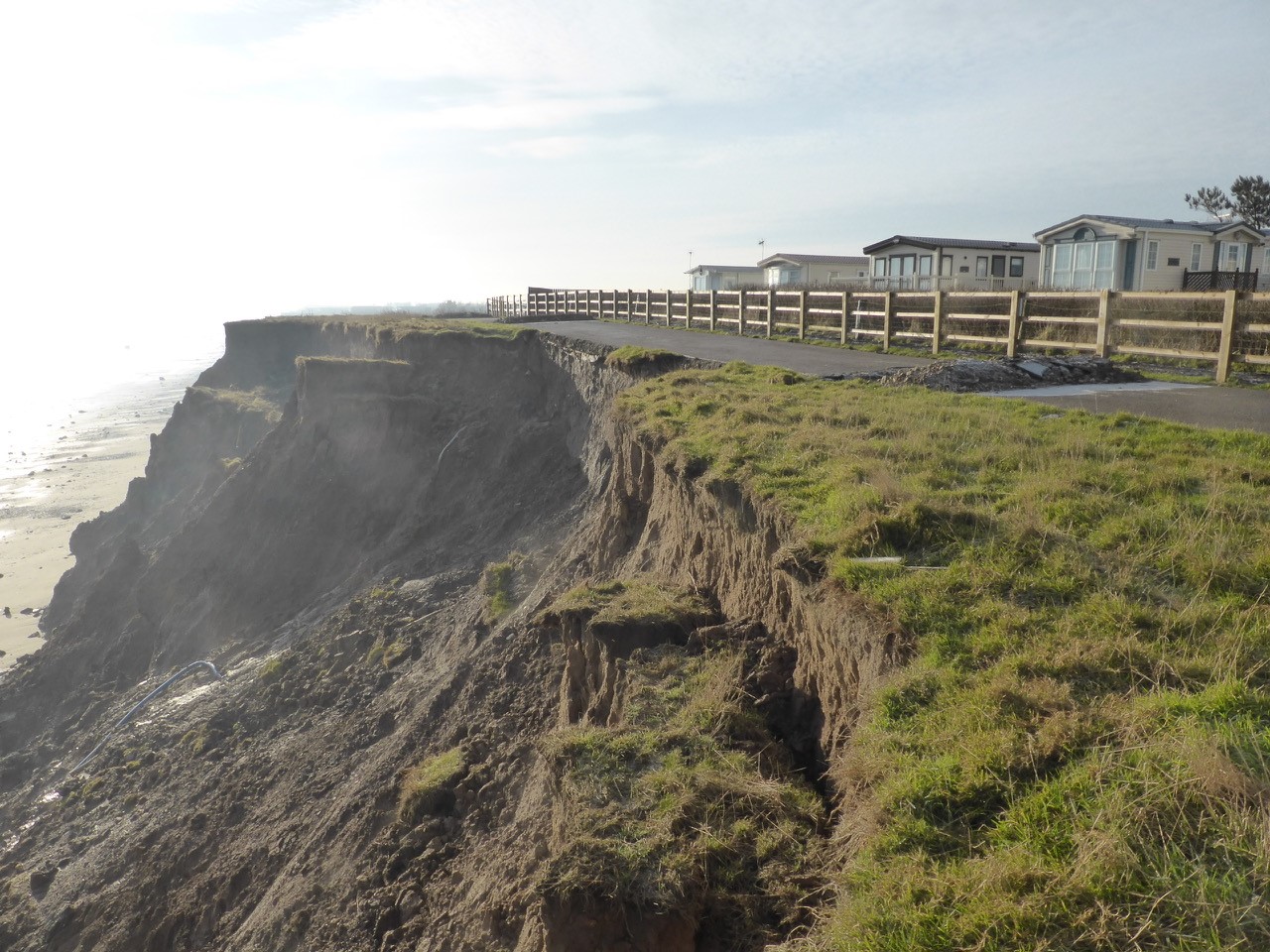 James Cox 18 Oct 2019
Many of us who studied Physical Geography at school or university will remember Yorkshire’s Holderness coastline as providing a classic case study as to the impacts of coastal erosion. This infamy is well-founded and media coverage often reminds us of the devastating impacts that the UK’s fastest eroding coastline continues to have on everyday lives. Within the East Riding of Yorkshire, local press reported in March 2019 that up to 230 homes could fall into the sea during the next nine decades, as well as more than 500 holiday chalets, statics and touring caravan pitches. More recent articles report how in Withernsea, there are just five metres of clifftop to go before East Riding Council will need to shut a road that will, effectively, cut off 55 homes as well as hundreds more holiday chalets. Yorkshire is not alone in this battle, with similar stories being reported in Norfolk, East Sussex and West Wales to name but a few of the other areas of the UK most severely impacted by erosion. Whilst coastal defences provide a useful and important role in many local planning authorities’ response to these issues, they are often impractical or unviable and present significant cost to the public purse (as, indeed, do decisions not to protect the coastline). This leaves coastal activities and businesses literally exposed to the elements, putting their future viability at risk in areas where economic challenges are already well documented.So what else can the planning system do to help? Paragraph 167 of the National Planning Policy Framework (2019) puts the designation of Coastal Change Management Areas at the heart of its strategy for tackling coast erosion. Within these areas, paragraph 167 goes on to say that Local Planning Authorities should: a) Be clear as to what development will be appropriate in such areas and in what circumstances; andb) Make provision for development and infrastructure that needs to be relocated away from Coastal Change Management Area. In response to provision b), we have seen an increasing amount of coastal planning authorities adopt so-called “roll-back” policies as part of their development plans to proactively manage the hazard of coastal erosion at a local level. Typically, these policies establish the principle of a development that is at risk from coastal erosion being relocated to an alternative, lower risk location which – in other circumstances – may not normally be considered acceptable in wider planning terms. At Lichfields, we have recently relied on the application of a roll-back policy to successfully justify the relocation of a large number of caravan pitches at a Holiday Park on the east coast of Yorkshire. To do so, our planning submission needed to address a number of matters that were outlined within the pre-application response received from the local authority. First, was the need to quantify the level of erosion that was taking place at the Park which, given the sheer unpredictability of coastal activity, is as much an art as it is a science. That is to say, erosion rates can only ever be estimated, with storm events and rising sea levels all having the potential to dramatically accelerate these processes. This was observed first-hand, with the above photograph showing the aftermath of a winter storm event in which the cliff edge retreated by several metres over the course of a few hours. Second, was the need to demonstrate that the proposal was, indeed, a roll-back of existing pitches rather than simply an extension to the Holiday Park ‘via the back door’. This was achieved via a commitment to removing existing pitches from the rolled-back area (following the installation of new ones) and then restoring it back to its original, undeveloped state thereafter. This, at the subsequent planning committee, proved to be a very important factor in persuading Council Members to unanimously vote in favour of the application, against a not insignificant amount of local opposition. Had the roll-back policy not existed – and it is noted that the neighbouring coastal authority has no such provision within their adopted development plan - then the same proposal would simply have been considered as new development in the countryside, with other local plan policies and material considerations taking centre stage in the determination of the application. Would it still have been approved? Probably. But a scheme of a more contentious nature may not have been. Moreover, the fact that the roll-back policy did exist helped establish the acceptability of the principle of the proposal from the outset. This, in turn, gave the Holiday Park operator the confidence to respond to the threat of coastal erosion now and in advance of it adversely affecting their business or comprising the safety of its guests. This surely has to be what good planning is all about. Image credit: Alastair Tindle

From a rock to a hard place

James Cox 26 Jan 2018
Whilst much of the UK was being battered by Storm Eleanor, Lichfields’ Leeds office braved the elements in early January to go on a study tour visit to the Johnson Wellfield Quarry at Crosland Moor in Huddersfield. Johnson Wellfield – part of the Myers Group – has been a client of Lichfields for a number of years; the company is known as Britain’s leading supplier of hard Yorkstone. Most recently, Lichfields’ Leeds office has secured planning permission for the expansion of the Johnson Wellfield quarry site by some 23 hectares. So, Arctic weather notwithstanding, we were only too pleased to take Johnson Wellfield up on their invitation to all of us to visit the quarry and see how it operates. Extending to circa 121 hectares, the Crosland Moor quarry currently produces in excess of 60,000 square metres of ‘Crosland Hill’ dimensional stone on an annual basis. The vast majority of the product is used in the construction industry, with Crosland stone notably used in London to reflag Westminster Hall, in projects at the National Maritime Museum, and in the Southbank Centre. Closer to home, it has been used to renovate the cathedrals in Leeds and Sheffield, as well as in and around Leeds’ Millennium Square and Leeds Dock. It has also been used in the regeneration of St Georges Square in Huddersfield which, located just outside the railway station, is where we started our afternoon visit. Thewlis Lane Quarry The Crosland Moor quarry is located some 3.5 kilometres to the south west of Huddersfield town centre and, having been kitted out with Personal Protection Equipment, a short minibus journey took us first to Johnson Wellfield’s most recent quarry at Thewlis Lane, where quarrying works have been underway for just 3 years. Starting life as an open, agricultural field, it was explained that the first task following the grant of planning permission was for earth-working machines to move onto the site and create earth bunds from the topsoil, helping to screen the quarry straightaway from neighbouring residential properties. Maintaining good relationships with neighbouring residents is clearly important to the Myers Group and this is reflected throughout their operation, with internal access roads having been lowered to preserve open views from nearby properties across the moorland and certain parts of the site having being made available for dog-walking. Bedding structure Following the repositioning/ removal of topsoil, it was explained that the second stage of quarrying works is to extract the first layer of stone using a digger fitted with a ripper-tooth. This layer of stone is usually very fragmented in nature and, typically, is either used as a material for stone-walling or is crushed to an aggregate. Sitting below it is a layer of block stone that forms the quarry’s primary output and which we were able to see being extracted by diggers during our tour. Incredibly, the block stone is around 320 million old, with individual blocks ranging from 1-100 tonnes. We were told that one of the main challenges of the entire quarrying operation is the logistical difficulty of ensuring that any extracted stone is moved away from the quarry basin in a timely manner so as to avoid it becoming congested with material. As such, we were able to watch a steady stream of dumper truck vehicles transporting the extracted stone from the quarry to the cutting sheds for processing. And it was here we headed next. Extracted block stone Inspecting the wire saw Once the block stone has been extracted, it is cut by a series of three computerised saws, each of which is capable of cutting the stone in a different way and producing a variety of finishes. This was likened to the slicing of a loaf of bread – first of all the uneven ‘crust’ is cut off by a wire saw to provide a flat surface and then it is ‘sliced’ into slabs by large circular saws. We then watched the stone being moved to the secondary cutting sheds where it can be cut into more intricate shapes and sizes, using digital templates to ensure that the most efficient use is made of any individual slab. Any excess is then recycled and crushed to form aggregate or walling material, with even the smallest of stones capable of being crushed on-site to form sand that can be sold to the building industry. In the cutting sheds           Cutting the stone - part one     Cutting the stone - part two   The final part of our tour took us to the robot sheds; recent, state-of-the-art additions to the quarry that, based on computer programming, are able to shape stone with incredible accuracy– much like a 3D printer. It was explained that the robots are able to produce stoneware with a greater degree of accuracy and consistency than a stone-mason ever could by hand; this is an important factor when, for example, like-for-like replacements are required for renovation works in listed buildings. It was heartening to hear, though, that Johnson Wellfield still insists on employing manually-skilled stone-masons to operate the robots, benefitting from their unrivalled knowledge of the material. Robot-controlled cutting A hand-cut tribute to Compo At the end of the tour, there was time to reflect on how the overall sustainability of the quarrying process we saw. It is clear that practically no material is wasted - and of course, the quarry sites themselves are required by the planning process to be reclaimed – potentially as future development land. Indeed, once the Thewlis Lane quarry site (where our tour started) reaches the end of its life in 2025, it is expected to be infilled with shale, compacted and developed for housing, with an allocation in the emerging Kirklees Local Plan for over 300 homes. Who knows, perhaps some of these new houses may even be built out using the same material that was once buried beneath them. Our thanks go to the Myers Group for providing a very enjoyable and informative afternoon.