50 years of Heritage Planning - York: reflections on a study in conservation

York: reflections on a study in conservation

28 Sep 2017
Fifty years ago the Civic Amenities Act introduced Conservation Areas into England’s planning system. It was one outcome of an unparalleled concern for the survival of historic towns and saw town planners bring their skills to bear on heritage concerns.
By the mid-1960s many historic towns and cities were struggling; the post-War drive for modernity had starved them of investment, they were being strangled by enormous traffic growth and, frequently were seen as curious relics rather than as places with a future. Coinciding with the launch of Conservation Areas in 1967, York was the subject of a comprehensive study into its conservation needs. By involving planners such as Prof Nathaniel Lichfield, solutions were proposed to the interlinked issues of landuse, traffic, industrial blight and the economic wellbeing of historic areas. While the report showed a way forward for York (and other cities facing similar issues) it did not remove the threat and Prof Lichfield was instrumental in opposing the City Council’s plans to carve an inner ring road through neighbourhoods now protected as conservation areas. 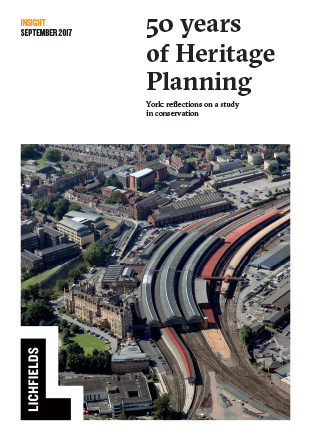