In his last budget statement before Brexit, Philip Hammond took the opportunity to ease the Government’s spending squeeze.

Philip Hammond declared that the economy is “back on its feet again”, as he signalled an end to the policy of austerity which has dominated budget statements for nearly a decade. The Chancellor was buoyed by upward revisions to economic growth forecasts from the Office for Budget Responsibility (OBR), which now expects growth next year to be 1.6% (up from 1.3% in March), then 1.4% in 2020 and 2021; 1.5% in 2022; and 1.6% in 2023 (albeit the forecast for 2018 was revised down from 1.5% to 1.3%). In part this is due to strong jobs market, with unemployment forecast to hit a four-decade low of 3.7% next year. However, it was the OBR’s improved forecast for the public finances that had most impact. Borrowing this year is expected to be £11.6bn lower than expected, and to keep falling over the next five years.

Our latest Economic Outlook summarises the key announcements from the Budget, including Sir Oliver Letwin’s recommendations, support for the High Streets, growth deals, and the CAMKOX Arc. 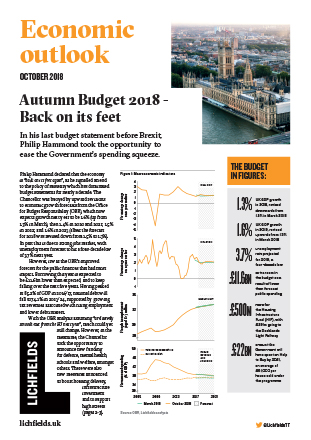