Levelling up: the routes to growth

Levelling up: the routes to growth

Identifying the need, opportunity and ability for local areas to prosper

05 May 2022
While the pandemic had delayed the progress of levelling up policy, in the interim, the political aspiration had been set. The Prime Minister had been referencing levelling up in a range of speeches and interviews, emphasising that it is not intended as merely an exercise in building new civic buildings, but a much broader set of cross-Whitehall priorities including reducing crime, increasing skills and restoring civic pride. By last September, even the re-named Department for Levelling Up, Housing and Communities (DLUHC) had been created.
Significantly the Chancellor’s Comprehensive Spending Review in October 2021 also set out the funding envelope. This included £1.7bn for the first round of the Levelling Up Fund (LUF) unveiled for all English regions and the devolved administrations with just under a half of the money going to the North East, North West, West Midlands and Yorkshire and Humber combined. Some £1.7 billion remains available to be allocated through the recently-launched LUF Round 2, which was accompanied by some changes to the prioritisation of local areas.
So against this backdrop, it might have been less clear what was left for the White Paper? Launched in February, the Levelling Up the United Kingdom White Paper contained a thorough analysis of the challenge, reflecting on 9,000 years of urban change across 332 pages, 6 capitals, 5 pillars, 4 objectives and 12 new ‘missions’. Few observers would disagree with the extremely thorough diagnosis and analysis of the challenges to be addressed.
The 12 missions are intended to provide consistency and clarity over levelling up policy objectives. These will serve as an anchor for policy across government, as well as catalysing innovation and action by the private and civil society sectors. However, these missions are largely a continuation of previous policies (e.g. the Industrial Strategy), and have no specific additional funding attached to them (for now at least) beyond what has already been announced.
Despite this, it is clear that the White Paper aims to effect meaningful change to the economic geography and prospects of the country, by setting out transformative systems and structures that target resources and priorities more effectively over the long term. Evaluated against these aims, the impact of the systems change could be significant – particularly its cross-Whitehall statutory remit – but inevitably implementation will take time and it may be even longer before enduring structural improvements start to materialise. 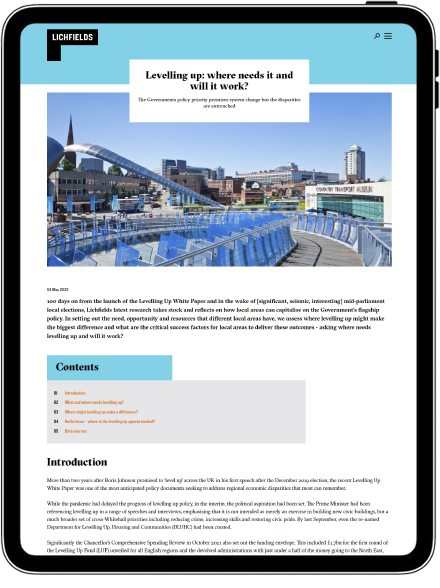