13 Mar 2019
As Parliament grapples with Brexit, the UK economy continues to defy expectations (for now).

This year’s new slimmed-down Spring Statement was, perhaps inevitably, rather ‘lower key’, with the Chancellor himself claiming it to be a ‘fiscal non-event’ amid the other pressing business in the House of Commons.

In headline terms, the UK economy continues to grow, with wages increasing and unemployment at historic lows, leading Philip Hammond to conclude the economy had proved “remarkably robust”. However, the Office for Budget Responsibility downgraded its forecast for growth in 2019 to 1.2% from 1.6% in October. It maintained its forecast of 1.4% growth in 2020 and revised up its forecast for 2021 to 1.6% (from 1.4% in October). There remains a cloud of ‘considerable uncertainty’ in these forecasts according to the OBR.

Town Centres: Planning for the Future 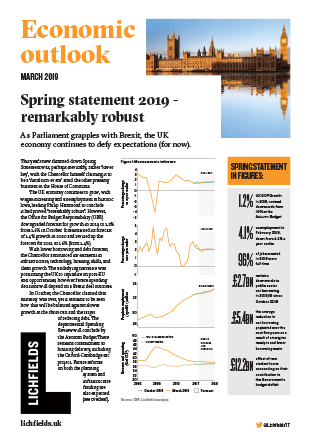 Town Centres: Planning for the Future