On 9 December, the Mayor of London wrote to the Secretary of State for Housing, Communities and Local Government (SoS) regarding the draft London Plan. The Mayor said his officials had worked with MHCLG to amend the SoS’s March 2020 Directions requiring changes to the Intend to Publish (ITP) London Plan in such a way that the Mayor considered workable, but that he had not received a response to the minor amendments proposed.
On 10 December the SoS replied to the Mayor, with a list indicating where his proposed wording was accepted and also issued two further Directions:
“Since I directed you on your draft plan in March it has become clear that there are some further issues. Therefore, I am issuing two further Directions. Firstly, in light of the profound impact Covid-19 is having on London, and other towns and cities, I am issuing a further Direction in relation to Direction DR4, specifically regarding updated para 6.4.8. This is a modest amendment to my previous direction which will provide boroughs in the difficult position of facing the release of Green Belt or Metropolitan Open Land with a greater freedom to consider the use of Industrial Land in order to meet housing needs.
Second, I am issuing a new Direction regarding Policy D9 (Tall Buildings). There is clearly a place for tall buildings in London, especially where there are existing clusters. However, there are some areas where tall buildings don’t reflect the local character. I believe boroughs should be empowered to choose where tall buildings are built within their communities”.
The SoS has requested that the Mayor amends tall buildings policy DP9 so that a borough’s definition of a tall building should not be less than 6 storeys or 18 metres measured from ground to the floor level of the uppermost storey. Where there is no definition the tall buildings policy in the London Plan will apply to buildings over 6 storeys or 18 metres, rather than the 25 metres in height in the Thames Policy Area, and over 30 metres in height elsewhere in London that is stated in the current ITP London Plan.
The SoS has requested that the Mayor amends Policy E4 Land for industry by inserting “In exceptional circumstances when allocating land, boroughs considering the release of Green Belt or Metropolitan Open Land to accommodate housing need, may consider the reallocation of industrial land, even where such land is in active employment uses”.
The amendments relating to the previous 11 Directions cover matters including parking standards, land for industry and logistics, and housing density.
The SoS has asked the Mayor to re-submit his Intention to Publish version of the Plan with amendments that address the 11 previous Directions and the two additional Directions.

The Mayor of London, Sadiq Khan has published a Draft Budget for the Greater London Authority (GLA) to help the capital recover from the financial hardships brought on from the Coronavirus pandemic. The budget is £38m less than was previously anticipated, partly down to the loss of council tax and business rates caused by the pandemic, with a proposed total final budget for the GLA for 2021-22 being £602m.
The budget will focus on nine long term measures which have been labelled as ‘missions’ which are targeted at improving both economic and social issues directly caused by the pandemic. These missions include a focus on enhancing employment opportunities, improving mental health and wellbeing, improving digital skills and overall connectivity, combating climate change and improving the deliverability of attractive public spaces.
As well as this funding, the Mayor has also set out his plans for a new generation of social housing in the capital. The new Affordable Housing Programme will receive £4bn worth of funding, and aims to deliver 82,000 new homes from April 2021. This new round of funding will run alongside the current 2016-2023 programme.
The new programme will also ensure housing providers who wish to benefit from funding meet certain conditions relating to design and building safety. These include the installation of sprinklers or other fire suppression systems in new blocks of flats, a ban on combustible materials being used in external walls for all residential development, new space standards requiring private outdoor space and minimum floor to ceiling heights.

A Green New Deal for London launched by the Mayor is to provide £10m worth of funding to projects which create green jobs and help combat climate change. The Greater London Authority will receive £10m worth of investment which will be separated into three parts. Part one will aim to lower emissions from heating and powering London’s buildings with increasing the efficiency of domestic energy systems and generating cleaner sources of energy such as solar. Part two will focus on limiting transport emissions and encouraging alternative methods of transport such as walking and cycling. The public realm will also be a target for investment with access to public green spaces improved. Part three will aim to support, businesses which are active in the green economy to create jobs and facilitate the transition into a low carbon circular economy.

Lichfields has published its latest Insight, ‘Mind the Gap’, which investigates the relationship between housing land supply and the deliverability of homes in each London Borough. The research considers whether the minimum ten year net housing target incorporated in the Intend to Publish draft New London Plan (2019) will actually be deliverable if current trends continue. The report utilises previous estimates of housing land supply against what has been delivered, to understand the realistic link between land supply and delivery.
One of the key findings from the research is that the current housing land supply accounts for just under 12,000 more homes than the housing target for the ten year plan period. The total estimated supply is 498,000 homes across the 32 Boroughs. However, the Insight finds the reported figures often do not tie in with the reality on the ground and several inconsistencies are present with each Borough’s approach. For instance, only two-thirds of Boroughs have an Annual Monitoring Report reviewing a recent monitoring year and only 1 Borough has published a 5-Year Housing Land Position Statement that considers both the 2019 NPPF and ‘clear evidence’ to justify how deliverable a site actually is, in accordance with the definition of a ‘deliverable’ site in the new framework.
The research appears to show that most Boroughs have been overestimating their housing supply, thus creating an optimism bias, by over-estimating the deliverability of sites and how quickly homes will be built out. This bias leads to on average, a 20% overestimation of housing supply for the following year. For Boroughs with at least 5 years' data, the average overestimation was 9%; this jumped to 38% for Boroughs with just 3-4 years’ worth of data available. What is apparent is that the Boroughs which monitor their housing supply more frequently have tended to forecast the supply of housing more accurately.
It is also clear that when looking at London as a whole, there is still an issue with lapsed permissions, further contributing to the shortfall. The below graph taken from the Insight demonstrates London’s supply trajectory when accounting for an average optimism bias of 20%. 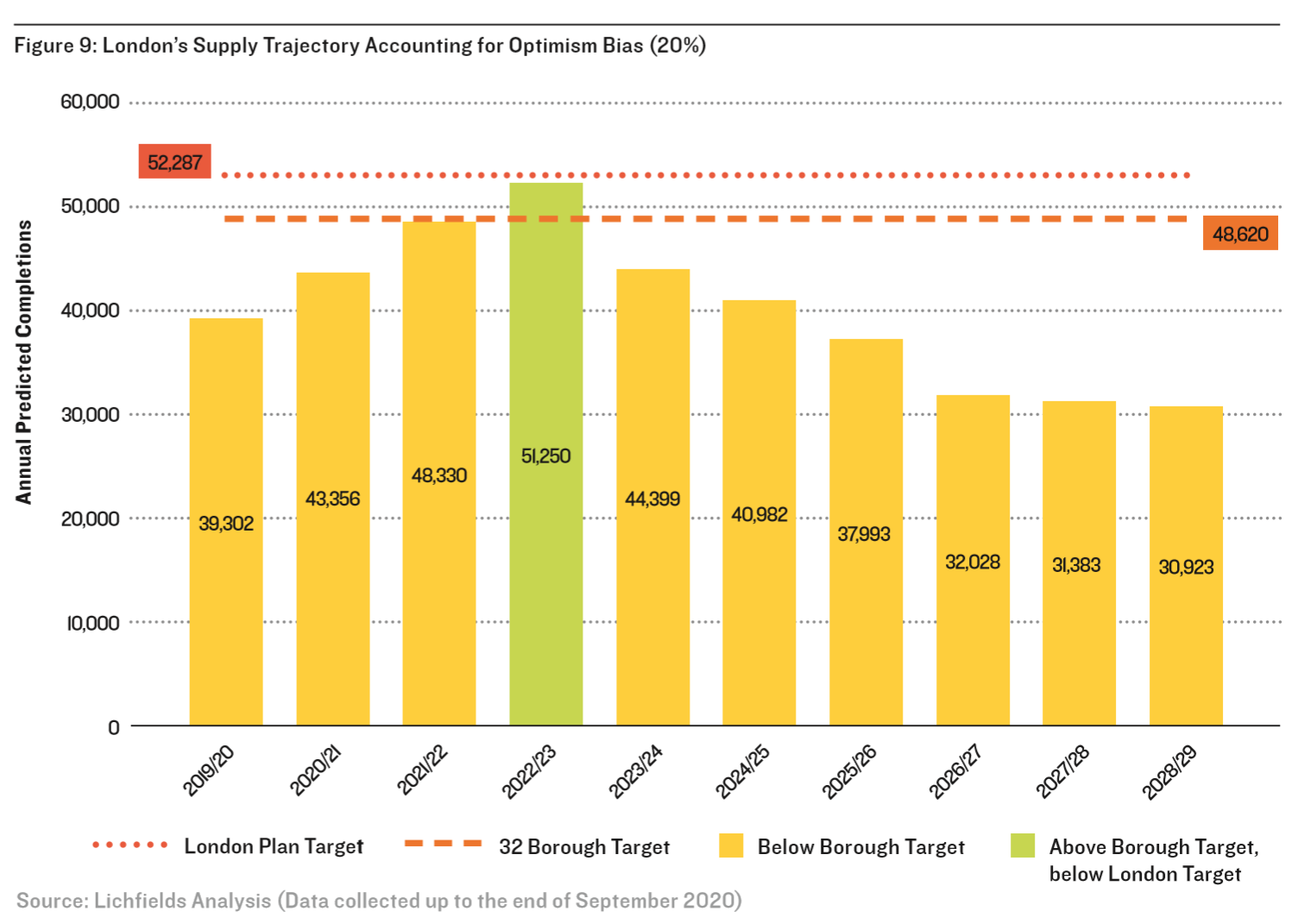 The Insight recommends that Boroughs should release more land for housing if they are to meet the housing targets in the New London Plan, and where necessary this should be done through local plans and green belt reviews if relevant.
The optimism bias may also have implications for the Planning White Paper. The research concludes that London Boroughs will need to think more realistically about their housing land supply trajectories if the White Paper proposals to set binding housing requirements and remove the requirements for maintaining a 5YHLS are to be compatible with the objective of meeting housing need.

A new package of funding has been agreed by TfL, the Department of Transport and HM Treasury to finance the last phase of the Crossrail infrastructure project. In August, it was announced by Crossrail that the current funding arrangements were insufficient to complete the work, and that new financial support would be needed to keep the project on track for its scheduled opening in the first half of 2022.
The Greater London Authority (GLA) will cover the costs initially with £825m from the Department of Transport which will be provided by GLA to TFL as a grant. The GLA will then use Business Rate Supplement and Community Infrastructure Levy revenues to repay the loan. The Mayor of London Sadiq Khan has stressed the importance of getting the project finished and said: “Securing this financing package enables us to press full steam ahead with getting the central section of the Elizabeth line open as soon as possible”.