12 Jul 2016
On 12th July 2016, CLG published the 2014-based Household Projections for England, which project average household growth of 210,000 each year across the country between 2014 and 2039. This is the same level projected in the previous, 2012-based projections, despite the latest underlying population projections showing an extra c.10,000 people each year. On the whole, the projections show a continuation of the trends in the 2012-based projections; namely the potential for continued suppression in household formation particularly for younger age groups. They are likely thus to under-estimate the true level of future need and demand for homes in many areas.
This guide has been produced by Lichfields to help you navigate the new household projections. Using the interactive map, click on an area of England to look at local headlines, including; 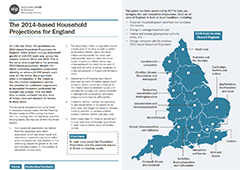