Above Standard? Plans for housing under the new NPPF

Above Standard? Plans for housing under the new NPPF

24 Jul 2019
In 2017 the Housing White Paper proposed a formulaic ‘standard methodology’ that was intended to be transparent, easy to use and consistent with the Government’s subsequently expressed objective of delivering 300,000 homes by the mid 2020s. This was crystallised the following year in the revised NPPF and PPG which confirmed that authorities would now need to plan on the basis of this standard method.
One year on from the introduction of the revised NPPF, we explore how the emerging plans of local authorities are responding to the standard method for calculating housing needs, which was calibrated to identify a minimum local housing need of around 273,000 per annum across England.
Are local authorities boosting their targets above the minimum starting point? How many local authorities are proposing to go below the standard method? What is happening in London with the new London Plan?  And what does this tell us about the prospects of plans putting in place proposals that go beyond the standard method to reach the 300,000 ambition? 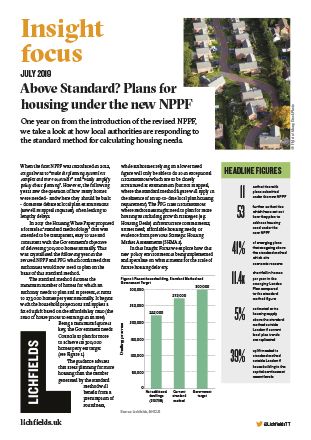