Bethan Haynes 27 Jun 2018
Last week, the Office for National Statistics (ONS) published its methodology[1] for how it will turn the 2016-based population projections (released in May) into household projections, having taken on this task from the Ministry of Housing, Communities and Local Government (MHCLG). When they are released in September, these household projections will provide the critical input to estimates of housing need that will inform the next generation of Local Plans. When combined with the Government’s proposed standard methodology for housing need, the new ONS methodology puts achieving the Government’s housing supply ambition for 300,000 homes per annum at significant risk. This blog explains why.
Since the introduction of the NPPF in 2012, the calculation of objectively assessed housing needs (OAN) has attracted much debate at Local Plan examinations and s.78 appeals across the country. Local authorities, developers and consultants alike have sought to grapple with OAN and have produced varying outcomes, not helped by the level of ambiguity in the current PPG[2]. Debates vary depending on local circumstances but arise from questions such as:
However this debate plays out, the PPG is in no doubt as to the ‘starting point’ for that debate: the official household projections.

Stage (1) – demographic-led needs – attracts much debate because of its potential to significantly decrease or increase the overall OAN, and is the basis upon which other uplifts (e.g. for market signals or employment) are often applied. Demographic-led needs comprise two elements: (1) population projections, which project the overall number of people and age structure of a given area, and (2) household projections, which project the rate at which certain people (by age and gender) will form households, thus turning the population projection into a household projection.
ONS currently produces population projections (nationally and sub-nationally) every two years, the most recent being the 2016-based projections published on 24th May[3]. It draws upon five-year trends in births, deaths and migration[4] to project growth by local authority over a 25 year period (2016-41). At present the PPG allows for sensitivities to be undertaken to the official projections, meaning plan-makers can base their OAN on alternatives to the official projections if more appropriate to do so. For example, using a longer 10-year migration trend might be more appropriate if there has been a recent fall in housebuilding which is not reflective of ‘the norm’.
Household projections have, until now, been produced by the Department of Communities and Local Government (DCLG)[5] (now MHCLG). DCLG projected trends in household formation based on trends back to 1971. After the 2011 Census, it became clear that household formation fell significantly between 2001 and 2011 (particularly among young adults) and was at its lowest level (Figure 1). At that time, housebuilding similarly fell to its lowest level in recent history, undoubtedly having some impact on the ability of people in these age groups to form households[6]. The 2014-based projections showed no recovery in these rates nationally (with a marginal decline up to 2039 – see Figure 1), albeit the national picture masks significant variation between local authorities, with many areas seeing rates amongst these age groups projected to fall sharply in the future (particularly across the South East)[7].
Figure 1 – Historic and projected household formation rates for 25-34 year olds (England) The current PPG allows plan-makers to sensitivity test the household projections. Indeed, it explicitly identifies the potential impact of low housebuilding on supressed household formation as an example of something plan-makers may want to consider[8]. This means the OAN assessment can - and where applicable should - reflect some recovery in these rates (rather than simply planning based on past trends, indicating more of what has gone before). Planning for such an improvement helps areas avoid a “vicious circle” scenario where low household projections leads to reduced housing requirements and reduced housebuilding, in turn reducing household formation.

In 2015/16, the Local Plans Expert Group (LPEG) was asked by Ministers to put forward recommendations for speeding up local plan production, given the woeful progress being made (only a third of areas had up to date plans). LPEG was told by virtually every person it spoke to that the debate over OAN was the primary factor holding up plan adoption, particularly during the Examination process. It recommended a redraft of the PPG with clearer guidance on the kind of adjustments to make to household projections to reflect migration trends, household formation, market signals and affordable housing need. Guidance was given on how to address employment growth – removed from OAN but retained as a ‘policy-on’ approach. In February 2017, the Government’s Housing White Paper agreed with the principle of simplifying the approach to OAN[9]. In September 2017 it set out its proposed standard method as part of its ‘Planning for the Right Homes in the Right Places’ consultation, which has fed into the draft revised NPPF and draft revised PPG[10].
In its simplest form, the standard method requires local authorities to take its projected household growth from the latest official projections and make a fixed percentage uplift, depending on the local affordability ratio (the ratio of house prices to earnings)[11]. The scope to adopt a number lower than the figure given by this calculation is very limited, although where authorities seek to adopt a higher number (e.g. based on employment growth or infrastructure) Inspectors are advised to find this sound (unless there are compelling reasons not to). When published in 2017, the standard method gave a national total of 266,000 – still well short of the “300,000 per year by the mid-2020s” target set out by Government - indicating that some (or all) local authorities would need to go above and beyond the standard method if national targets are to be met.
Nevertheless, the message from Government on the standard method was clear – the official projections, combined with the local affordability ratio, should be the basis for planning for housing.

Production of the household projections has now moved to ONS, which will publish its first round of projections – the 2016-based household projections – later this year. Last week (on 20th June 2018), it set out its proposed changes to the methodology. For the most part, these changes were minor or did not affect planning (e.g. removing outputs by marital status). However, there was one small – but significant – change which could have potentially significant impacts on planning for housing, particularly in the short to medium term. Unlike DCLG, which based its projections on household trends back to 1971, ONS now proposes only to use trends in household formation back to 2001. Whilst ONS proposed to hold rates constant post-2021, its methodology still implies a much sharper decline in formation rates in the shorter term. We know that in the decade 2001-11 housebuilding fell to its lowest level and household formation amongst young adults changed significantly. If the new household projections only draw upon this (relatively) short term trend for projecting future household growth, is there a significant risk of ‘baking-in’ trends which are not reflective of future ‘need’ but simply an illustration of what the number would be if we continued more of what has been before?
ONS had consulted on its approach in 2017, and many respondents (including Lichfields) pointed out the need for the methodology to reflect not just a ‘purist’ demographic approach, but reflect on the real-world implications for housing need. Suggestions were made that ONS might wish to consider producing local ‘variant’ projections (as DCLG used to do at a national level) with modified formation rates as the basis for the standard methodology. It does not appear ONS intends to follow this advice.
ONS has yet to publish any detailed methodology or figures, but Figure 2 shows what a simple linear trend would be on national formation rates (for 25-34 year olds) based on 2001-11 change. As expected, it shows that formation rates for 25-34 year olds would fall more significantly in the short term than DCLG had previously suggested. For 25-29 years, formation rates could be as low as 36% by 2021 (compared to 45% in 1991) and for 30-34 year olds could be just under 48% (compared to 52% in the 1990s). Over the next 10 years (by 2026) this could yield 150,000 fewer households, or 15,000 less a year than indicated based on current projections. When the Government’s standard methodology is applied, this could bring the national total to around 230,000 homes per annum, some 70,000 below the 300,000 aspiration.
Figure 2 – Projected formation rates for 25-34 year olds (England) based on 2001-11 trend 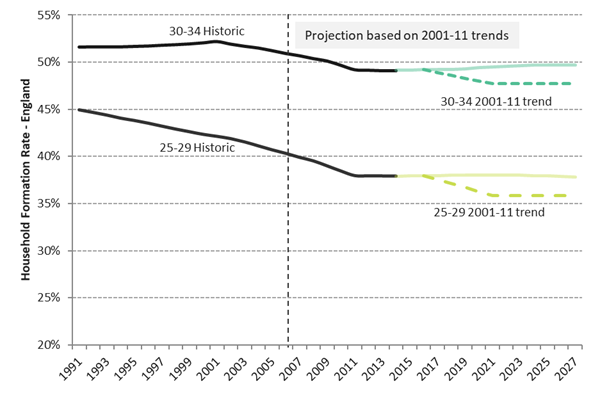 If we are to have a simplified, standard method for calculating housing needs it becomes ever more important that the inputs to the calculation are fit-for-purpose. There were already concerns that the 2014-based projections were infected by some suppression of household formation, but the ONS proposed methodology firmly bakes in these problems. It could lock many areas into vicious cycle: reducing the number of homes required based on lower projections, in turn leading to reduced housing supply. All the while, Government maintains its ambition for housebuilding to reach 300,000 homes a year.
In July we expect the Government to confirm its changes to the NPPF and PPG including the standard methodology. The Government’s draft proposals, with a formula-based market signals uplift of up to 40% (capped) to address affordability and consequences of housing undersupply were set based on the previous DCLG methodology for household projections. If the demographic baseline to which the Government applies its market signals is reduced, there is a compelling case for Government to look again at the standard methodology. It should do this by:
Without these changes, it is not at all clear that the next generation of Local Plans will come anywhere near to hitting 300,000 homes per annum, even with the Growth Deal incentives the Government has been piloting in areas such as Oxfordshire.
The Government’s focus has been on planning for the right homes in the right places, but maybe we should be considering the more fundamental question of planning for enough homes in the first place.

[1] See ONS Methodology Statement here[2] See PPG guidance on Housing Needs Assessments here[3] See ONS’s latest Population Projections here[4] Projections for birth and death rates for LPAs are also influenced by national expectations of births and deaths based on longer term trends. Similarly, international migration projections are driven by the total projection nationally, which is based on longer term trends.[5] See DCLG’s methodology for the household projections here  [6] Changes in household formation amongst these age groups can also be linked to other factors, e.g. increased participation in higher education amongst young adults.[7] See DCLG 2014-based household projections here[8] PPG ID 2a-015.[9] See Housing White Paper here[10] Read more on Lichfields’ thoughts on the draft revised NPPF here[11] Read more on the standard methodology in Lichfields’ insight here[12] Based on applying the 2014-based household projections and the 2001-11 trend household projections to the 2016-based SNPP, allowing for communal establishment residents.[13] http://britainthinks.com/pdfs/TW082_RR_online_PDF.pdf