3) Goodbye to buffers all together
It is not only the 20% buffer that’s proposed to go, it is buffers all together: the 5%, 10% and 20% are proposed to be slayed. For those LPAs that do need to demonstrate a 5YHLS this makes it easier to do so. This proposal weakens the 5YHLS test further and will mean that fewer homes are likely to approved and delivered. The rationale for this change is that buffers add complexity, don’t support the plan-led approach, and may “not bring equivalent supply rewards”. It would be interesting to see the evidence for that assertion.
4) How does the four-year supply transitional arrangement work?
Looking back at the Ministerial Statement, I speculated that the proposed four-year supply transitional arrangement might be restricted to those LPAs with specific constraints that would limit their ability to meet housing need. I was wrong.
Upon reading the changes, it applies to any LPA that:
1. Has submitted their plan for examination; or
2. Has a reg.18 or reg.19 plan that has a polices map, specific allocations towards meeting housing need (i.e. potentially not meeting need in full), and a stated housing requirement.
This will apply for two-years from the date of the revised NPPFs publication.
On the ground, this will afford protections to a large number of LPAs without an up-to-date plan but with emerging plans which may have limited detail, may be flawed in terms of soundness, and may not be adopted for some years to come. Albeit I suspect some of these LPA that benefit from this – especially those heavily restricted by Green Belt – may still be unable to demonstrate a four-year supply measured against Local Housing Need.
The timeframe of two years also seems to be a bridging gap for these LPAs. Two years is probably an insufficient time to rework an emerging plan (i.e. amending it based on the new NPPF), consult upon those changes, and get it both examined and adopted. Moreover, there may well be a reworked planning system towards the end of this period with a new local plans process. Therefore, it is probably reasonable to suspect there will be future transitional arrangements. 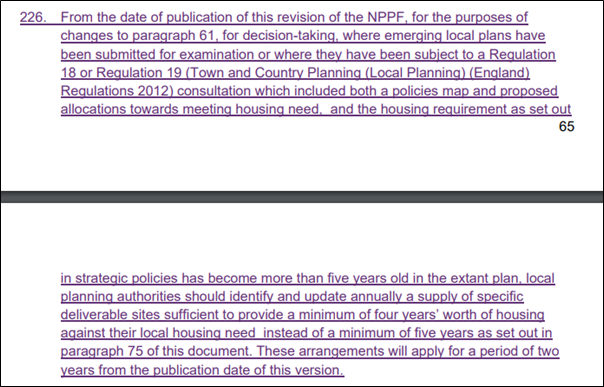 5) Neighbour Plan protections: all powerful
The changes proposed really do add some clout to the protections afforded to Neighbourhood Plans (‘NP’). In effect NPs are treated the same as Local Plans in the context of 5YHLS. This means that an area with an NP with policies and allocations to meet its housing requirements is almost always likely to be protected from a 5YHLS challenge for five years from adoption.

Anything else?
One consequential change related to 5YHLS will be an amended process for Annual Position Statements. The uptake of these has been pretty low – only two were received last year by PINS – but presumably an LPA will be able to prepare one once their plan becomes more than five-years old (having not been reviewed and found not to need updating). Arguably though there is not much point to APSs under the wider proposals.
Conclusions
Overall, the conclusions I reached in December haven’t changed. If adopted as one package, we may well see both more plan making and more LPAs being able to demonstrate a 5YHLS (or a four-year supply, or be immune from challenge), but with the corollary that fewer homes will be planned and built.
Reflecting back on the 6th December pronouncements, the draft NPPF wording probably means even fewer homes are likely to be built than I had speculated might be the case when I read the WMS. The five-year protection to local plans with unchallengeable extension despite only having developable sites, the removal of all buffers, the wide range of LPAs that will be afforded a four-year supply transitional arrangements, and the new protections to Neighbourhood Plan areas will all grind away at any scope to address shortfalls in delivery in the places that, arguably, will need the homes most.

[1] The NPPF states “To be considered developable, sites should be in a suitable location for housing development with a reasonable prospect that they will be available and could be viably developed at the point envisaged”

[3]  As detailed in our London focused research ‘Mind the Gap’ – see Figure 8.