Housing unaffordability – are we creating ‘Generation U’?

Housing unaffordability – are we creating ‘Generation U’?

Grant Swan 21 Jan 2016
It is well-trodden ground that house prices are high, that they have increased a lot over the last few decades and that getting on the housing ladder has become more of a challenge than ever. But precisely how difficult has it been for different generations to afford to buy a home? For this blog post, we have crunched the numbers and the results can be seen below (Figure 1). 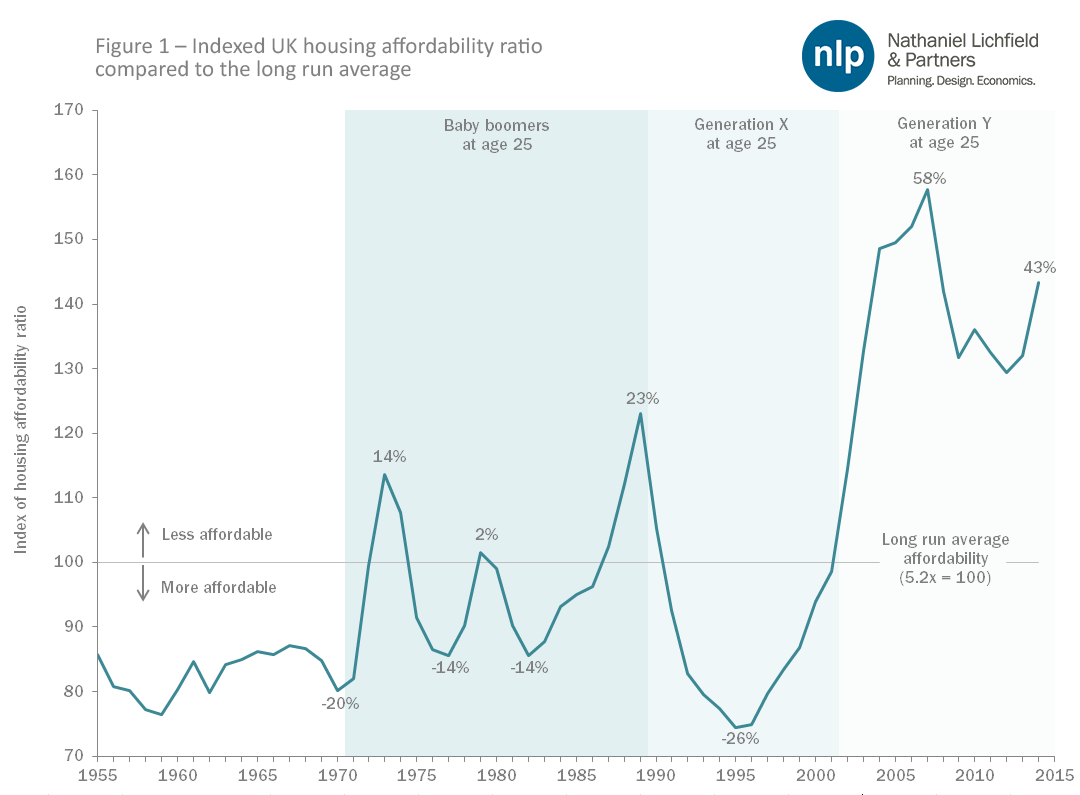 Source: Nationwide, MeasuringWorth, NLP analysis
Reflecting the myriad of factors influencing house prices, affordability has changed a lot over time. Back in the 1950s, ‘60s and ‘70s, an average house in the UK was valued between four and five times average earnings – coinciding with a period of high housebuilding rates. The 1980s brought greater credit liberalisation – dual income mortgages and preferential tax arrangements – and fuelled the potential for viewing a house as not just a home but as an asset too. This meant that in the new millennium, homes were valued at over seven times earnings.
Market Swings
This series of events and policy changes over several decades accentuated the boom and bust swings. The peak before the crash in 1973 saw homes as being 14% less affordable compared to the long run average. When the market crashed to the bottom in 1977, homes became 14% more affordable. In turn, the peak in 1989 saw houses as 23% less affordable but they became 26% more affordable at the bottom of the market in 1995.
However, the latest wave is the starkest. Before the 2008 financial crash, homes were 58% less affordable compared to the long-run average. If we were to apply previous trends to this cycle, homes should have become significantly more affordable at the bottom of the market. But they didn’t – when the housing market apparently ‘crashed’, homes were still 29% less affordable than the long run average and since then have crept back up to 43% in 2014. Did we actually see a full market correction? Or perhaps unaffordability is being driven by a hot market such as London?
‘Generation U’?
These wild market swings impact on people’s ability to buy, depending on when they were born – and, of course, the degree to which they can access credit. If we assume that on average someone would be looking to buy a home at age 25, the ‘Baby Boomer’ generation would enter the market between 1971 and 1989 and, on average, would see homes valued at around five times earnings. So-called ‘Generation X’ would enter the market in the 1990s and would see homes around 4.5 times average annual earnings. But ‘Generation Y’ would come into the market in the new millennium; they see homes priced at over seven times earnings.
If we are not careful, housing could become so unaffordable that we end up creating a new, thoroughly unlucky, generation altogether. Maybe ‘Generation U’ would be most appropriate?

Political change – how will planning and housing policy be affected?

Political change – how will planning and housing policy be affected?