In with the old, in with the new – re-using and redeveloping Reading Prison

In with the old, in with the new – re-using and redeveloping Reading Prison

Daniel Lampard 27 Apr 2017
‘Fixing our broken housing market’, the Government’s Housing White Paper puts great emphasis on brownfield sites as priority locations for residential development. Aligned with this is the Housing and Planning Act 2016’s new secondary legislation for brownfield land registers and for ‘permission in principle’. The Government’s focus therefore is very much on promoting delivering new homes on brownfield sites. However, many of the brownfield sites which remain vacant or underused are difficult to develop and heavily constrained, and present interesting challenges to realise their development potential.
As part of a wider Government initiative to provide over 3,000 houses on the sites of several former prisons, it is anticipated that the disused Reading Prison building will be redeveloped. As a brownfield site in a prime location in Reading, but with significant heritage value, the prison demonstrates both the opportunities and difficulties that arise when considering their re-use and/ or redevelopment.
The Prison has recently shown its popularity as a temporary tourist attraction. It was the centrepiece to the highly successful Reading Year of Culture 2016 with an exhibition held in tribute to author, poet and playwright Oscar Wilde, one of its most renowned inmates. The exhibition attracted around 50,000 visitors before closing at the end of last year.
Decommissioned in 2013, the current prison structure was opened in 1844, and lies within Reading Abbey – which was founded in 1121. Wilde, Prisoner C.3-3, spent two years incarcerated there between 1895 and 1897, following which he wrote his last work ‘The Ballad of Reading Gaol’(1898). The Grade II listed building also sits within a designated Area of Archaeological Potential; it costs an estimated £20,000 a month to maintain, following its closure and despite standing empty.
Portrait of Oscar Wilde in his former cell 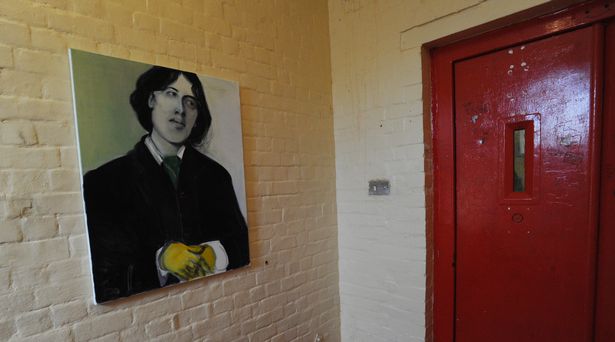 The Prison forms a key feature in the town’s historic landscape and it is anticipated that development proposals will serve as an ‘anchor’ within Reading’s emerging Abbey Quarter. The prison stands alongside several other structures which are designated as scheduled ancient monuments or listed buildings, including Abbey Church (the burial place of King Henry I); a Tudor royal residence and Jane Austen’s school.
Given the historical context of the site, addressing heritage and archaeological constraints will be essential. The Reading Prison Outline Development Framework (2015) highlighted a number of issues which will need to be taken into consideration by any forthcoming proposals for the site. Subsequently the site has been included in Reading Borough Council’s Draft Local Plan (April 2017). Policy CR13a Reading Prison states that the “building would be used for residential, commercial offices or a hotel, and could include some cultural or heritage element that draws on its significance”. It suggests that the conversion of the Prison could result in the creation of 65-90 dwellings.
This figure is significantly lower than the 300 homes’ estimate that Reading MP Rob Wilson is reported as having suggested ‘could be built’ on the site in November 2015.
It is clear any proposals for the site will have to be sensitively designed to ensure the conservation of its historic integrity. However, as demonstrated through the example of Kingston Prison, Portsmouth, proposals such as this present a unique opportunity to conserve integral heritage assets whilst delivering much-needed housing.
These discussions come at a critical time for Reading, which needs 699 new homes a year until 2036 in order to meet current housing need1. A scheme of the scale suggested promises to help in contributing to alleviating local housing pressures.
Reading Abbey, Berkshire

Whilst Reading Borough Council have already adopted the Outline Development Framework (in March 2015), Lord Keen of Elie, Lords spokesman for the Ministry of Justice, stated on 14 December 2016 that a new planning brief for the redevelopment of the Prison is expected to be taken to Reading Borough Council for approval towards the latter half of the year. Meanwhile conservation work on the Abbey Ruins and Inner Gateway has already begun.
Finding a way to deliver new homes at the Prison would prove a fascinating and challenging scheme. It has the potential to introduce a new use into one of Reading’s best known heritage assets, conserving for future generations its important history.
Lichfields has an extensive track record of helping to achieve planning permission and listed building consent for development within the Thames Valley and in sensitive heritage and conservation locations. For more information on our experience or to discuss any potential development opportunities relating to heritage assets, please do not hesitate to contact us.