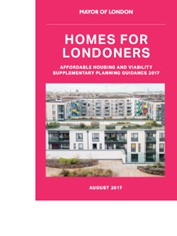 The Mayor of London, Sadiq Khan, published his Affordable Housing and Viability Supplementary Planning Guidance (SPG) this week. Since coming to office last year, the Mayor has set about expediting key planning documents for London in an attempt to bring greater certainty to a chaotic political environment and to deliver on the promises he ran on during the election.
It is unsurprising that housing is a central priority – undersupply and high prices are common themes that every Londoner would recognise. In his election campaign, Sadiq highlighted two obvious but challenging policies:
Both of these goals are ambitious at the best of times, let alone in today’s period of political and economic uncertainty. To try and achieve these goals, the affordable housing and viability SPG sets out a range of measures that, according to the Mayor, will expedite planning for housing and ensure a higher – and more consistent – level of affordable housing provision.
Land is the key initial input into housing development – without it, homes will not be built; without a steady supply of land in the system, housebuilders can’t prove their investment worth to shareholders. The value of land – and therefore how it is bought and sold - is determined by a myriad of factors including: proximity to infrastructure; proximity to jobs; neighbourhood desirability; and the value of the homes that could be built on-site, to name only a few.
This last factor is important – simply put, the sale or rental value of the homes that are built after years of risk and development needs to exceed the costs and provide a return to mitigate said risk. Combine this with the need to build affordable housing – often where public grant for these houses is significantly lower per unit than it has been in the past – and you have a recipe for lengthy discussions about trade-offs of competing interests which slows development and increases risk.
A policy that won’t make headlines but gets to the root of housing development is that of measuring land value - typically, if the residual land value (i.e. the total income from house sales/rent minus construction costs, fees and profit margin, thus leaving the residual value of land value) is equal to or higher than the benchmark land value (below which it is deemed that no reasonable landowner would want to sell), then the scheme could be considered ‘viable’. Therefore, how we value the ‘benchmark land value’ is crucial to determining viability.
The Mayor wants developers to use the ‘Existing Use Value Plus’ (EUV+) approach rather than a ‘Market Value’ (MV) approach in London - essentially, EUV+ looks at the value of land in its current use (industrial, commercial, agricultural etc.), recognises the returns that this use would generate and applies an uplift or ‘sweetener’ to that value, sufficient to encourage the owner to sell. This differs from the MV approach which essentially recognises the value of land based on previous transaction, subject to development plan policies, – i.e. it uses comparable market information to identify that land’s value and emphasises landowner ‘optionality’ i.e. emphasises the need to incentivise the landowner to sell in the first place.
The Mayor believes that under the MV approach, the benchmark land value provided by market information is too high i.e. developers have to pay too much for the land before the landowner is prepared to sell. Indeed, the SPG cites the RICS by stating:
[…] research published by RICS found that the ‘market value’ approach is not being applied correctly and ‘if market value is based on comparable evidence without proper adjustment to reflect policy compliant planning obligations, this introduces a circularity, which encourages developers to overpay for site and try to recover some or all of this overpayment via reductions in planning obligations.

In the SPG Consultation Summary, the Mayor goes on to state:

Reliance on land transactions for sites that are not genuinely comparable or that are based on assumptions of low affordable housing delivery, excess densities or predicted value growth, may lead to inflated site values.
In shifting to the EUV+ model, the Mayor is making two assumptions -  1. the land value that has to be achieved in London under MV to encourage the landowner to sell is too high and is preventing house building; and 2. this high land value is squeezing planning obligations, such as affordable housing, out of consideration. This is a pretty bold intervention from the Mayor.
But the shift to EUV+ won’t be easy and comes with fundamental questions.
First, how is the existing use value of a site determined, that isn’t currently being used? Here, other land valuation methods may end up being the default method, throwing the shift in London up in the air.
Secondly, the uplift (the ‘plus’ in EUV+) needs to be set at a suitable level – what is that suitable level? The Mayor has set out a range of between 10% and 30% to allow flexibility on valuation but does this provide any more certainty than the existing system?
Thirdly, what about the transition period and dealing with sites where a land agreement has already been reached? Deals that have already been made were agreed under a different set of circumstances – is there a grace or transition period?
Fourthly, how far will landowners be incentivised to sell their land under the new system? They may consider that the uplift under EUV+ is insufficient, and be prepared to hold out in the hope that the policy shifts back in the future and/or a new Mayor is elected and reneges on the guidance. This scenario of ‘who will blink first’ also has repercussions – if landowners do not come forward with land, developers will find it increasingly difficult to secure sites. The impact would be felt on the development industry and could undermine housing delivery.
These concerns are probably why the Mayor has built in some wriggle room - as highlighted above, the 10-30% range of uplift values that could be achieved in EUV+ may help the approach in the guidance to bed-in and help development professionals shift their focus. The Mayor has also indicated that an ‘alternative use value’ (AUV) approach may be used but it a) must reflect policy requirements and b) will only be accepted where there is an existing implementable permission for that use. Where these criteria aren’t met, there will be a greater requirement for development viability proposals to explain why these preferred approaches wouldn’t work on the specific scheme (Paragraphs 3.49-3.52).
Ultimately, the Mayor is trying to ensure that more land is brought forward, more quickly and cheaply – helping developers to build homes (and more affordable homes) quicker - and to squeeze value from the landowner rather than trade-off against planning obligations. However, handling the transition is important. If the guidance’s new approach is too hard and fast, landowners may sit on their land, thus quashing any dreams the Mayor had about delivering on his electoral promises. And yes, councils can intervene and use compulsory purchase to bring forward sites but not everywhere. The key questions are therefore: 1) is the SPG sufficiently robust to achieve the Mayor’s goal of decreasing land value? 2) are the sweeteners large enough to encourage land to come forward and to allay fears housebuilding will dry up? 3) Is the SPG just the beginning of the Mayor seeking to use planning to change land policy, and will the draft Housing Strategy due in September, and the draft London Plan later this year take this approach even further?
Land policy is tricky.