Grant Swan 26 Sep 2017
Last weekend I attended talks given by a variety of designers speaking at the London Design Festival. These graphic designers and artists all had something in common: their work being used by the public – whether that was as immersive public art, murals, way finding, or branding a pop-up embassy.
One of the speakers, Camille Walala, had livened up Exchange Square, Broadgate with her use of strong colour, bold shapes and an inflatable castle (why not?).
Camille hoped that ‘Villa Walala’ would “introduce a sense of the unexpected” into what is usually a corporate environment filled with “suits” and surrounded by tall offices and backing off Liverpool Street station. She also said, "I think that, to turn a corner into Broadgate, and find a huge, bouncy, pink and patterned house will be hugely entertaining.”[1] 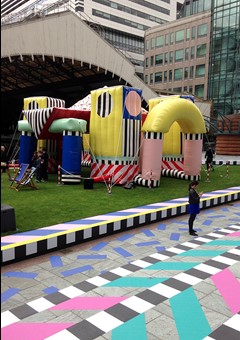 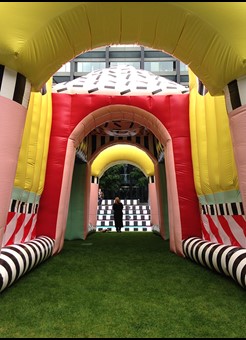 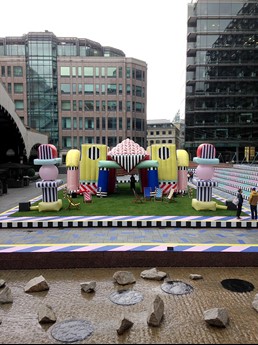 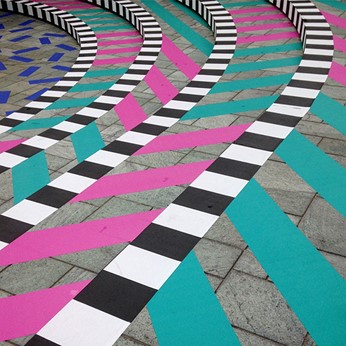 Much of Camille’s work involves her Memphis Group-inspired bright shapes and colours, overlaid onto building facades and her designs always evoke a sense of fun and playfulness. Visitors to her current exhibition at the Now Gallery (inspired by hall of mirrors amusements) have said that it gave them the experience of being a child again. It’s had a very positive response, proven by the need to now ticket the exhibition since it has continued to grow hour-long queues.
Another talk I went to was by Michael Beirut from Pentagram, who worked on the branding of Hillary Clinton's election campaign. Another of his many projects I'll mention involved working on the environmental graphics for over 60 libraries in public schools across New York City. Because the book shelves had to be only so high for the children, they were offered a lot of wall space to play with. Murals were painted onto the library walls - a different artist for every library - and each reflected their school's own character and community. The murals have therefore given the pupils and librarians a better sense of belonging and ownership.
Colour can be a huge part of a place’s identity. If you look at the beautiful pastel-coloured houses of Cornwall, the colourful coastal homes of Cinque Terre, Stockholm’s bright old town of Gamla Stan, the royal blue Jardin Majorelle of Marrakech or the detailed facades of houses on Haight Street, San Francisco – all of these make up a big part of their city or region’s identity and are a draw for tourists too. Studies show that colour can affect our mood and influence our decision making in all environments [2], as written about in The Architecture of Happiness, so why wouldn’t we want to make our streets more colourful and vibrant?
To name a few colourful projects Lichfields has worked on, The Old Vinyl Factory has the Converse Wall of Clash mural on the Powerhouse which brings the disused building to life and there is also a wrap around Cabinet Building of Beatles mania. Part of The Deptford Project, The Rogers Stirk Harbour eight storey residential building located alongside the listed carriage ramp features brightly coloured privacy screens and overlooks a public market area.
Within London, here are a few colourful places I like: 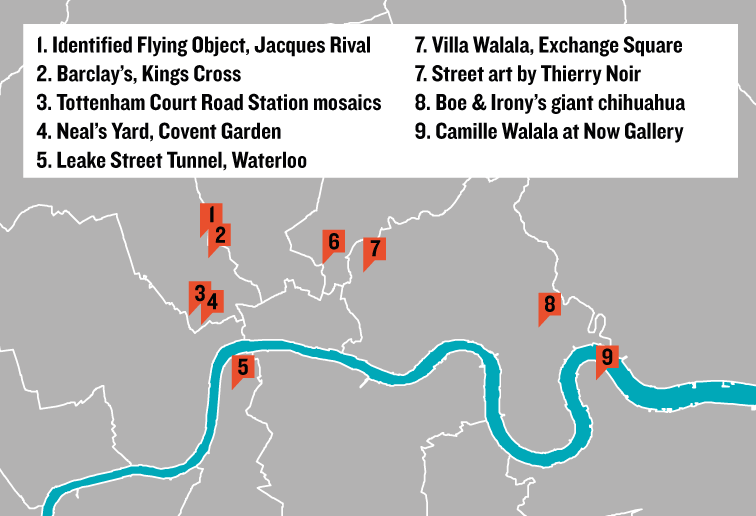 Could our happiness be improved with more colourful buildings or public art in our neighbourhoods? With the help of the Government and local authorities working closely with artists and designers to represent local communities, I believe we would feel the difference.
Sadiq Khan has pledged to support 25 community-led projects through his Crowdfund London initiative, investing more than £400,000. These include light installations in Southall, and conversion of a disused rail line into a public park and green link. He says that, “our shared mission is to empower as many people as possible to shape their city. We believe that if we can achieve that, people will feel a stronger sense of local belonging, and that the places we create together will better serve the needs and aspirations of Londoners.”[3] Also coming soon, will be some public art to coincide with Battersea Power Station’s redevelopment. Jude Kelly (artistic director of the Southbank Centre and arts adviser for Battersea Power Station) wants a 3km “arts corridor” along the river featuring new artworks[4].
London Design Festival is on annually with events, talks and exhibitions across the city.
Footnotes: