Self-Build: an innovative solution for ending homelessness in the 21st Century

Self-Build: an innovative solution for ending homelessness in the 21st Century

James Andrew Cox 26 Apr 2018
A lack of affordable, good quality housing in the UK is affecting everyone; thousands of people are being priced out of their homes every year. For more than 78,000 households (a city the size of Wolverhampton)[i], this means living in temporary accommodation, and for many more, on the street. With a record number of homeless people dying on the streets or in temporary accommodation (a figure which has doubled in the past five years)[ii], its critical to look at innovative approaches to help alleviate homelessness. My approach, as detailed below, would be to explore the potential of self-build accommodation, supported by additional social infrastructure and training.
A common misconception of homelessness is that chaotic lifestyle choices are a fundamental cause. According to recent research undertaken by Homeless Link [iii], in England some 4,750 people sleep rough on any one night, an increase of 15% since 2016 and 73% in the last three years. This steep rise in homelessness reflects structural changes relating to housing provision and welfare reforms, including but not limited to the end of assured shorthold tenancies (2010), the introduction of the so-called ‘bedroom tax’ (2012), the roll out of universal credit (2015), cuts to young people’s housing benefits (2017), a shortage of affordable housing more generally and ever-soaring rents[iv]. Despite this inexcusable rise, responses are slow; as we have seen with the £28m rough sleeping fund still being unspent[v] and recent comments made by the new homeless minister, Heather Wheeler, are causes for concern[vi]. 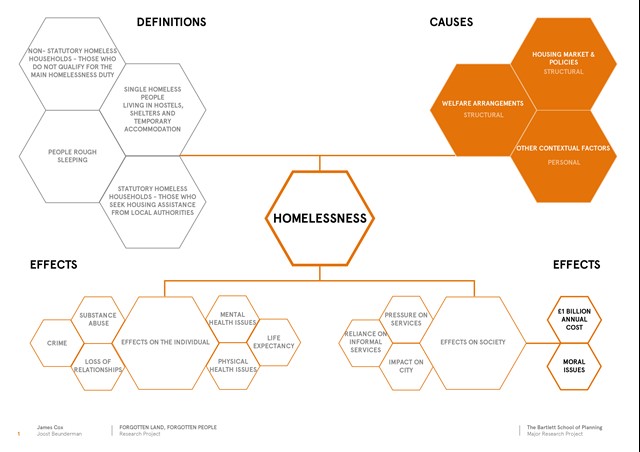 As professionals in the built environment, we can use our influence to create homes, places and cities that are designed to work for everyone. This belief was the main driver behind my post-graduate research project, entitled ‘Forgotten Land, Forgotten People’, which formed part of my MSc Urban Design and City Planning course at The Bartlett School of Planning, UCL. 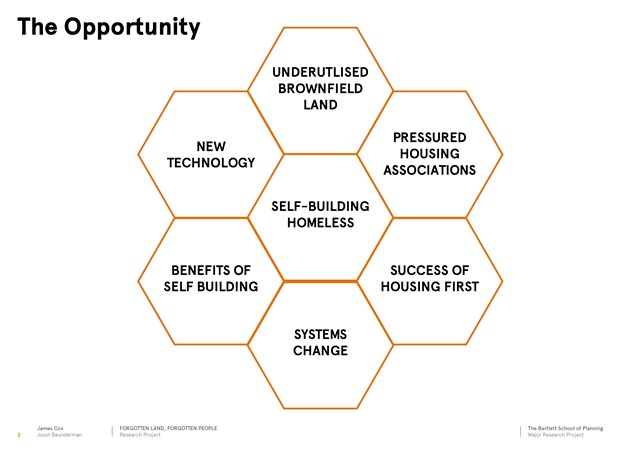 In partnership with Trident Group[vii], a Midlands-based organisation which aims to help the most vulnerable by providing good quality affordable homes, services and support, my MSc thesis proposed a new way in which housing associations could better use small un­der-utilised pieces of land within their ownership (for example garages sites[viii]), as self-build sites for groups of ‘self-build ready’ homeless individuals and families. ‘Forgotten Land, Forgotten People’ builds on the international success of Housing First[ix] and ties together the benefits of self-building, the pressures currently faced by housing associations (such as the 1% Rent Reduction, Right to Buy Extension and introduction of the Value for Money Standard) and the need for more affordable, adequate and secure housing to present an innovative solution for tackling homelessness through the built environment. 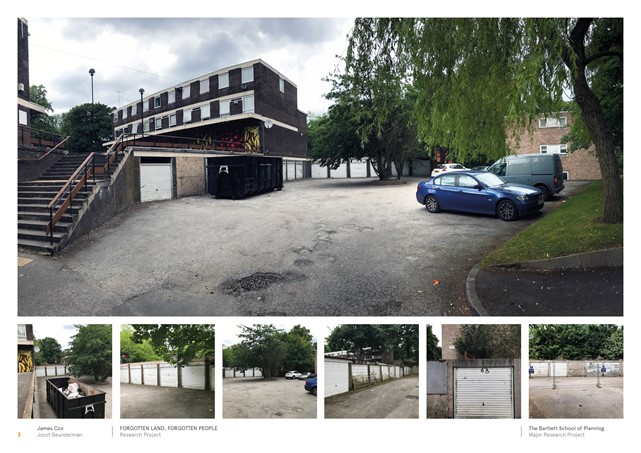 To fully explore the potential of the idea, my research looked at new self-build housing in the form of a physical intervention in a series of garage and garage court sites on a post-war housing estate in Birmingham. The physical scheme was based on specific criteria (set out below) and sought to respond to the many issues faced by homeless people, including the physical and mental health problems they often face. 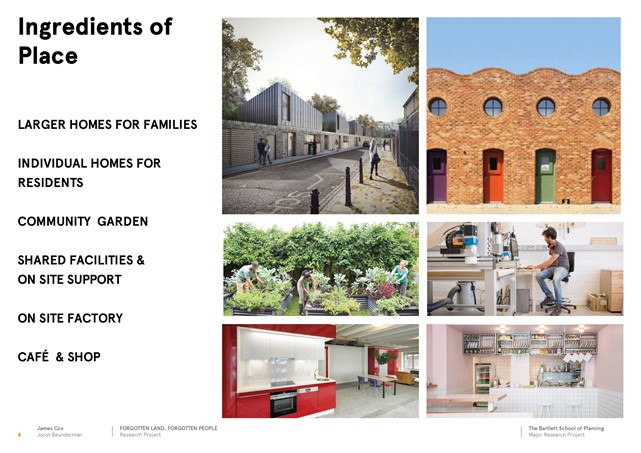 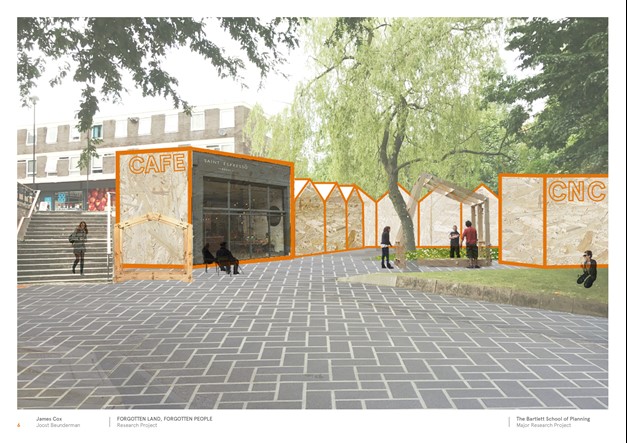 Looking beyond physical place-making, the project aimed to seize some of the opportunities that lie in creating the built environment. The process of self-building also has the potential to help alleviate many of the consequences of homeless­ness; it can equip participants with some of the necessary tools and skills to help integrate them back into society. New technologies and systems such as WikiHouse[x] can help to support this outcome, through lowering the skills’ thresholds needed and the costs involved in building homes. 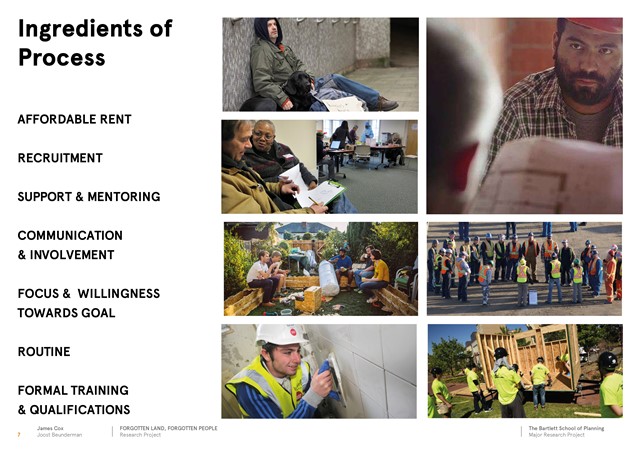 For a project such as this to work, it has to overcome barriers and provide incentives to convince all stakeholders it can work for them. This is vital to ensure they are willing and able to take on the risks of a project potentially causing tenancy sustainment concerns, a need for intensive support and ongoing management requirements. The process of taking a ‘self-build ready’ group and enabling them to build their own homes is not a short-term quick win for housing associations. However, the benefits would be felt widely across the both the development and health sectors - and beyond - through providing new homes and opportunities for homeless people, cleaning up a previously under- or unused and resented site, and delivering a marketable ‘product’. Whilst my project focussed on utilising garage sites for permanent homes, further discussions indicate that this prototype solution could work for many stakeholders even if only on a temporary basis, for example as a meanwhile use for a development site which aligns with the new Draft London Plan (Policy H4, Meanwhile Use)[xi]. 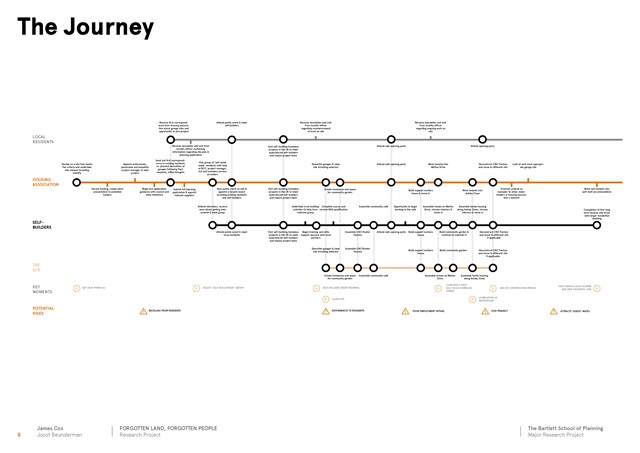 Following conversations with other housing associations and local authorities including Clarion Housing Group, Birmingham City Council, the West Midlands Combined Authority and more recently MHCLG, the GLA and the Y:Foundation, I believe my project could be an important part of the solution to end homelessness. I want to continue the conversation, take the concept forward and ultimately, finding a partner or two to help deliver a pilot scheme. Please do not hesitate to get in touch if you are interested.
james.andrewcox@lichfields.uk | @JamesCox94