Madeleine Rigby 07 Aug 2018
The Principles of Selection for Listing Buildings, published by the Department of Culture, Media and Sport (DCMS) in 2010, established that “particularly careful selection is required for post-war buildings, while buildings of less than 30 years old are normally listed only if they are of outstanding quality and under threat.” As we are now 30 years on from the height of the Post-Modern movement there is a sudden impetus to define what makes these buildings significant and which of them need to be safeguarded from harm.
Post-Modern architecture emerged in Britain during the 1970s, reaching its peak in the 1980s before disappearing around 1990. In essence, it was a reaction to the perceived rigidity and formality of Modernist architecture. For example, in contrast to the pure, contemporary forms and absence of ornamentation in the international style endorsed by Le Corbusier, Post-Modern architecture is characterised by its vibrancy and playfulness as well as its “plurality, engagement with urban context and setting, reference to older architectural traditions and communication through metaphor and symbolism” (a full history can be read in Historic England’s Introduction to Heritage Assets: Post-Modern Architecture, December 2017).
In recognition of this important strand of 20th century architecture Historic England (HE) conducted a survey in 2017 that resulted in the statutory listing of 26 (out of the 28 that were selected) Post-Modern buildings, eight at high grades. These included the Sainsbury Wing at the National Gallery in London (Grade I), the Judge Business School in Cambridge (Grade II*) and China Wharf in Southwark (Grade II). During this process HE were able to establish some key significant characteristics to look for alongside the established criteria published by DCMS and the various Listing Selection Guides published by HE. These were presented at an event entitled Post-Modern Architecture: An Introduction to Significance that took place last month. The event was held at Historic England’s London office and speakers included Emily Gee (HE), Deborah Mays (HE), Catherine Croft (C20 Society) and celebrated Post-Modern architect, Piers Gough (CZWG Architects). The following significance criteria were put forward by HE:
The analysis went on to demonstrate that, as with Modernist architecture, the intrinsic value or significance of these buildings may not be instantly apparent and that they need to be understood and interpreted in a way that is different to that of older building typologies. Furthermore, as the Post-Modern style was most commonly used for commercial architecture (a building category that typically has the shortest lifespan) many of these have already been demolished or had their significance reduced through alteration, such as through loss of decorative features, symbolism or interior spaces.
In the absence of a dedicated selection guide, these criteria provide a helpful starting point for assessing whether a building has the potential to be considered of special architectural or historic interest.
What we can take away from this is that, as with all historic buildings, a deeper understanding of Post-Modern architecture is necessary to make a judgment of its potential significance. As such, it is only by recognising these features that we will be able to safeguard this important strand of 20th century architecture from harm and manage change to individual buildings and their settings in an appropriate manner. Furthermore, those working with buildings of the period would do well to be aware that while the thematic survey will have undoubtedly uncovered the best examples of the genre, there may be others which have escaped notice, or which gain greater recognition over time. In fact, we are likely to see greater numbers of Post-Modern buildings included on local heritage lists over the coming years.
Example 1: Cascades, 1987-1988, Tower Hamlets (Grade II). This residential block by CZWG has an inventive plan form, flamboyantly-detailed facades and a dramatic silhouette that alludes to its industrial and riverside context. 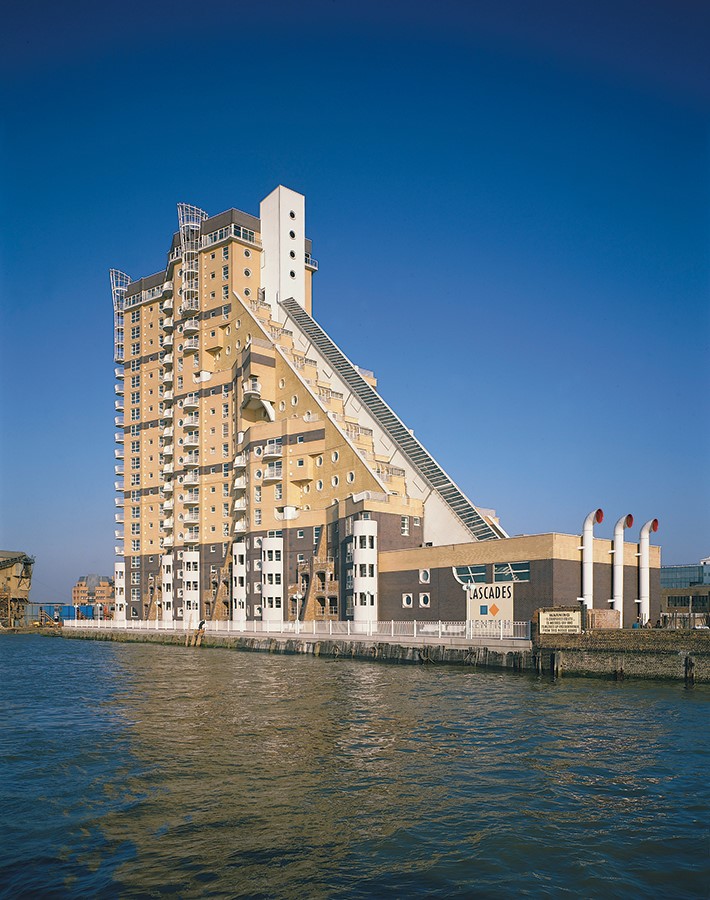 Example 2: The Isle of Dogs Pumping Station, 1986-1988 (Grade II*). This iconic building by John Outram is rich in symbolism and makes a playful reference to Classical architecture through its giant columns, stylised Corinthian capitals and corrugated tympanum. 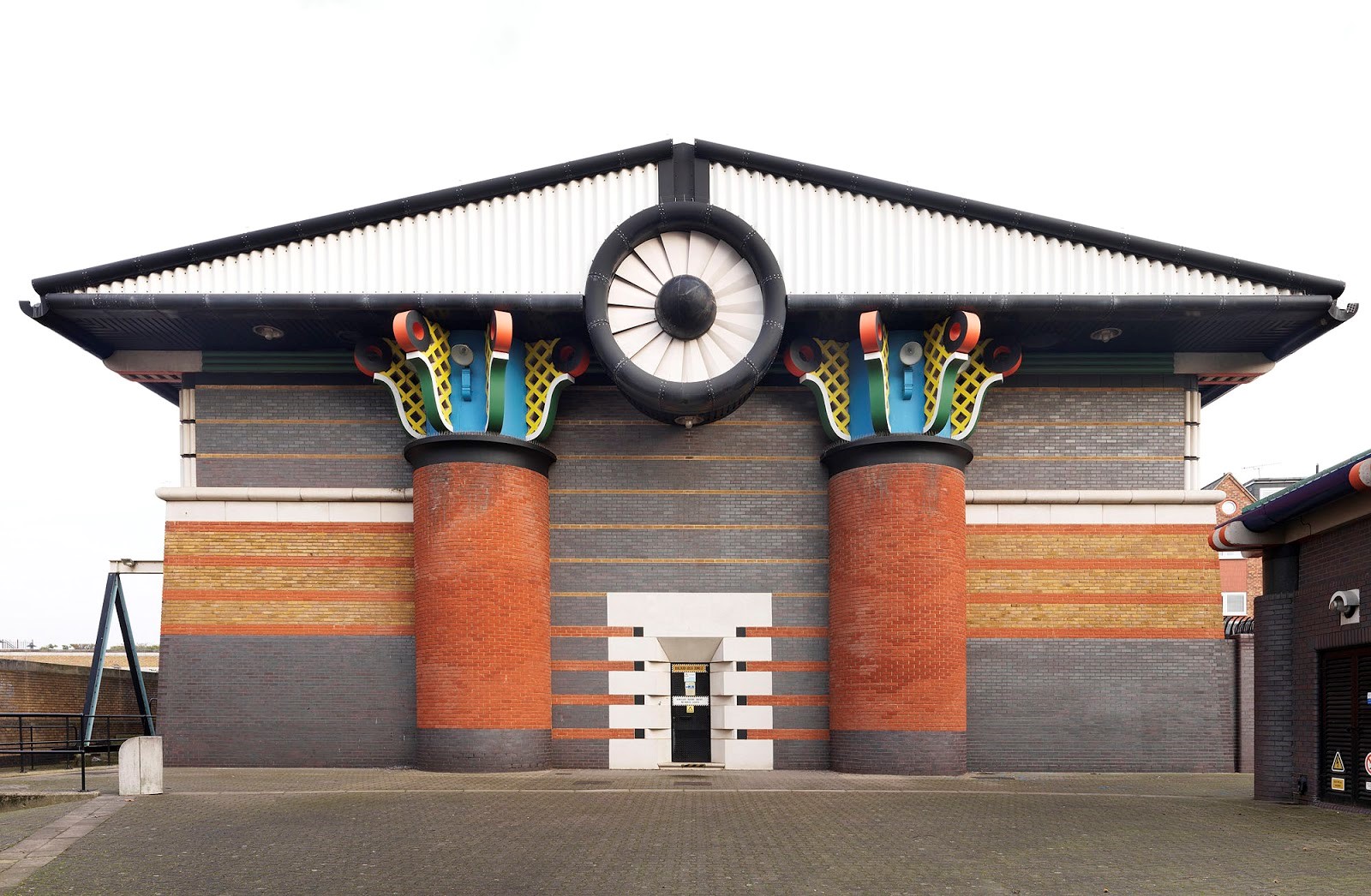 Example 3: Terry Farrell’s TV AM Television Studios in Camden Lock was altered in 2012-13 removing important symbolic imagery and details including the distinctive rooftop eggcups that were designed in reference to classical urns.