On rocky ground – The ALC system in England and Wales

On rocky ground – The ALC system in England and Wales

John Aynsley 04 Dec 2018
This blog looks at the Agricultural Land Classification (ALC) system in England and Wales, and how the lack of refinement within the classification system causes problems for planners and communities alike.
The ALC system was devised and introduced by the Ministry of Agriculture, Fisheries and Food (MAFF, now DEFRA) in 1966. It ratified five categories with which land can be graded, with Grade 1 being ‘excellent quality’ and Grade 5 being land of ‘very poor’ quality. Grade 3 constitutes about half of the agricultural land in England and Wales, and it is further divided into two subgrades, designated 3a and 3b.
The basis for classifying land is a set of criteria, listed below from most to least important:
Climate - climate is regarded as more favourable as temperature increases and with moderate rainfall, exposure and frost risk;
Site Limitations – the gradient of the site has a direct impact on the effectiveness of farm machinery. Flood risk also impacts ALC as the risk and frequency of flooding informs crop choices and impacts upon yield; and
Soil Quality – there are many variables within the soil that inform the classification. These include texture, structure, depth, chemical identity, moisture and erosion.
Grade 1, Grade 2 and Subgrade 3a are considered to be the ‘Best and most versatile agricultural land’ and it is this land that is given a higher status when considering development as NPPF paragraph 170 states[1];
“Planning policies and decisions should contribute to and enhance the natural and local environment by […] recognising the intrinsic character and beauty of the countryside, and the wider benefits from natural capital and ecosystem services – including the economic and other benefits of the best and most versatile agricultural land, and of trees and woodland.” 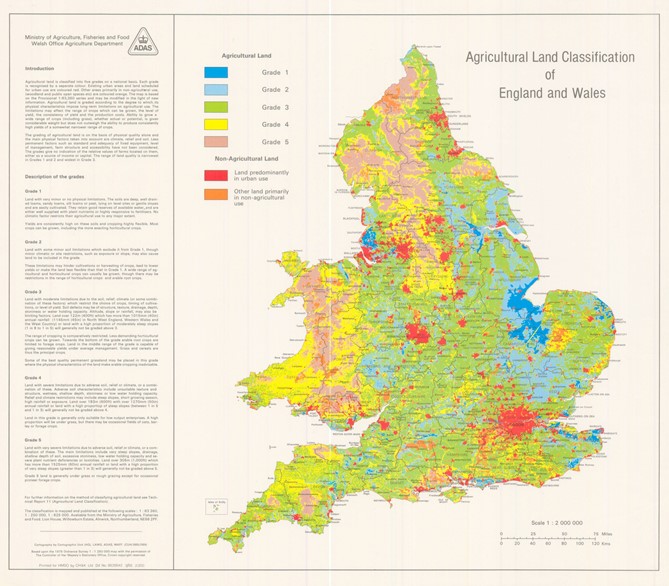 Figure 1 was produced by hand in 1975, it is derived from the criteria outlined above and is currently used on DEFRA and Natural England’s Magic Map[2] platform under the ALC dataset. It is the only map which provides ALC for the entire country. More localised revisions were introduced in 1988, showing the difference between 3a and 3b land.
Crucially though the 1975 map does not show the subdivision of Grade 3 land, which happened in 1976. So, whilst the difference between Grade 3a and 3b is key for planning purposes, we do not have a national map base that illustrates its distribution, unless it has been surveyed post 1988. If land is designated as Grade 3, which covers half of England and Wales, then a site-specific assessment by a specialist consultant is necessary to determine whether it is 3a or 3b.
This represents a key issue in both plan-making and the determination of applications as paragraph 170 of the NPPF protects the ‘Best and Most Versatile Land’ with the footnote going further – “Where significant development of agricultural land is demonstrated to be necessary, areas of poorer quality land should be preferred to those of a higher quality.”
However, there is currently not the information available to determine the areas of poorer quality land due no assessments having been undertaken to assess the subdivisions of Grade 3.
There are options to solve this issue. The first of which would be to assess all Grade 3 land, though clearly this would not be practical or viable.
Another potential solution would be to remove Subgrade 3a from the ‘Best and most versatile agricultural land’ definition. This would have two benefits: it would provide full clarity for planners regarding which land is protected through NPPF paragraph 170 by use of Figure 1, and it would reduce the land that is considered ‘best’ to around 21%. Grade 3 could then be given is own policy protections, less restrictive than Grade 1 and 2 land, though granted a level of protection that Grades 4 and 5 do not have.
This amendment would set clear boundaries for which land constitutes ‘best and most versatile’ and therefore would allow councils to set policies which protect this land. Furthermore, it would allow councils a clearer view when they come to allocate sites and remove uncertainty for developers and communities.
This would represent an overwhelming makeover for this policy, one which I am sure would stabilise the ground upon which the policy sits.

Milking the opportunities of rural diversification