Simon Coop, Lucy Benbow, Emily Broom & Abbie Connelly 06 Dec 2018
Following on from the consultation that took place in the Spring, the 10th version of Planning Policy Wales (PPW10) has now been published. Whilst the key policy objectives are largely unchanged from the draft, the Welsh Government has indicated that the final version has been made “simpler and more straight-forward to use in its design and content”. The true test of this will be seen in its implementation in the coming months and years, although at 168 pages long, simplicity and straightforwardness have not been accompanied by succinctness.
This is the first of two blogs that considers the implications of the new policy for development in Wales. Whilst this blog considers the broad concepts of well-being and placemaking that are central to PPW10, the next one looks at specific policies relating to residential development in more detail.

Perhaps the key element of PPW10 that sets it apart from the previous version is the fact that it has been prepared in the light of the Well-being of Future Generations (Wales) Act 2015 (WFGA), the objectives of which represent the central thread running through the document. The Ministerial Foreword expresses how PPW10 will “deliver the vision of the Wales we want set out in the Well-being of Future Generations Act” and the extent to which “PPW plays a significant contribution to the improvement of well-being in all its aspects.” Whilst this is undeniable, the result is that much of PPW10 is focused on setting the vision for the types of places that the Welsh Government wants to see in Wales, rather than providing detailed guidance for the implementation of this vision. This is a concern as deliverability is a fundamental issue in Wales due to generally lower sales/rental values but higher build costs than across the border in England.

The central thread of the WFGA remains within the PPW10, which also focuses on the new, multi-faceted concept of Placemaking. This relates to the delivery of Sustainable Places to support the well-being of people and communities across Wales.
The interlinkages between key planning principles (such as growing the economy in a sustainable manner, making the best use of resources, facilitating healthy and accessible environments, creating and sustaining environments, and maximising environmental protection) and the “five ways of working” (prevention, long term, collaboration, integration and involvement) are identified and shown (through a graphic included on page 22 of the document) to be integrated within the plan-making and development management processes. It is stated that this approach will contribute both to Placemaking and well-being. 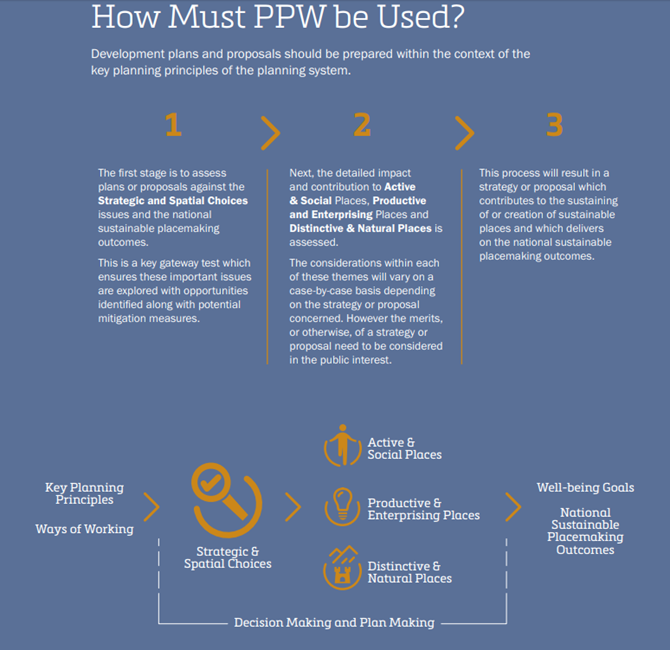 Compared with the draft version, PPW10 now seeks to define the holistic nature of placemaking and appears to contain less by way of a descriptive narrative of matters such as the inclusive process of sustainable placemaking and the attributes of a good place. This movement away from description is particularly clear in Figure 5, “PPW Themes Collectively Contribute to Placemaking” (included on page 21) which now incorporates the category ‘Strategic and Spatial Choices’ within the concept of placemaking. This acknowledges the components of:

Despite such changes, it is evident that PPW10 continues to be lacking in detail regarding the practical tools and policy mechanisms that are required to assist the delivery of new developments. In particular, it fails to provide sufficient guidance on the levers or interventions that can be applied should necessary development fail to come forward.

The strong emphasis on local authorities working together to prepare joint LDPs “in most cases”, has been removed from PPW10. The Summary of Consultation Response that was published alongside the new policy refers to a number of respondents having suggested the joint LDP approach to be too rigid. Respondents also expressed their concerns regarding the potential risk that joint LDPs may undermine local democracy and the ability of local authorities to plan for their own areas.

Instead, PPW10 reverts to emphasising the importance of the National Development Framework (NDF) and Strategic Development Plans (SDPs), stating that “the preparation of an SDP allows opportunities and challenges to be considered and planned for in an integrated and comprehensive way, promoting the achievement of positive planning outcomes.” No further details or policies are provided in relation to how the NDF and SDPs are to be prepared.

Reference to collaborative working is also mentioned elsewhere within PPW10. For example, local authorities are encouraged to work together when identifying sites to be allocated for housing in development plans, where the housing market search areas cover more than one authority. There is also an emphasis on collaboration between local authorities and other sectors, including land owners and house builders to assist in development delivery.

It is clear from the above that collaborative working will be important for a variety of sectors going forward, as a way of gaining new perspectives, insights and experience in relation to development deliverability and the achievement of the overarching goals of PPW.

PPW is strong on vision but weak on distinguishing the particular challenges to delivering development in Wales and how policy interventions will assist in addressing these issues. It is recognised that much of the practical detail is being passed onto the LDP manual which is out for consultation at the moment and that these documents will need to be read together.

In our view, as the primary policy statement of Welsh Government, PPW should be stronger on setting out the policy interventions proposed should development fail to come forward. We applaud the focus on place making which is important but ultimately it is only relevant if development is actually happening. There are too many areas of Wales where development is held back by deliverability and viability issues that require active policy intervention.