Are you uplifted? Land value uplift and economic appraisal

Are you uplifted? Land value uplift and economic appraisal

James Tindale 23 Jan 2018
In a few recent projects, I have used the former Department for Communities and Local Government’s (DCLG) – now known as the Ministry for Housing, Communities and Local Government – land value uplift appraisal guide to help generate benefit to cost ratios (BCRs) for a number of public sector interventions. For the uninitiated, BCRs are used to assess the potential benefit resulting from an intervention (e.g. infrastructure investment) versus the cost to the public purse. The higher the BCR the better, and in theory, the more likely that public funding can be justified for the intervention. There are other factors that can be used in calculating BCRs, such as the impacts assessed under the Department for Transport’s (DfT’) WebTAG toolkit. However, land value uplift plays a significant role alongside these other factors and has been a key feature of government guidance since 2016.
To assess the benefits of an intervention on land value, the latest (December 2016) DCLG appraisal guide considers how and when land is transferred from one use to another (e.g. industrial to residential), following the logic that an intervention will induce land use change and additional development which is more productive than before. The guide recommends that to calculate land value change, it is best to use land values specific to a locality based that are on research. However, if this is not possible, the DCLG guide provides indicative values for residential land, by local authority and by region, for agricultural and industrial land.
The DCLG guide’s residential land value benchmarks show London and the South East as typically having the highest, as highlighted by the chart below. It should be noted the average residential land value for London (£29,100,000 per hectare) is based on a development density of 269 dwellings per hectare which when scaled down to a development density of 35 dwellings per hectare, (as used for the rest of England) decreases to £3,800,000 per hectare. 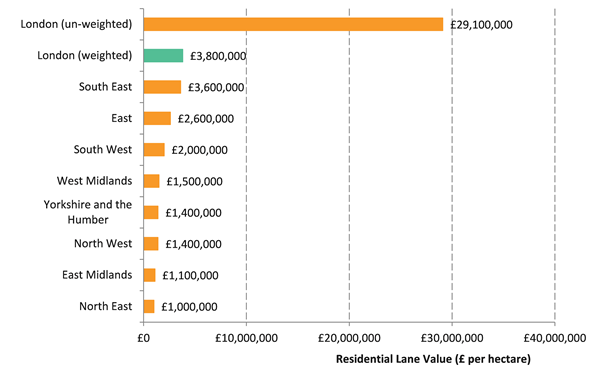 The variation in residential land values is further highlighted by the heat map below, that shows the South East and London as including the majority of local authorities with residential land values of £5,000,000 per hectare and upwards. The upshot of this is that a residential development in one part of England could generate a substantially higher BCR than the same scheme in another location, potentially giving the first location an advantage in accessing public sector funds. 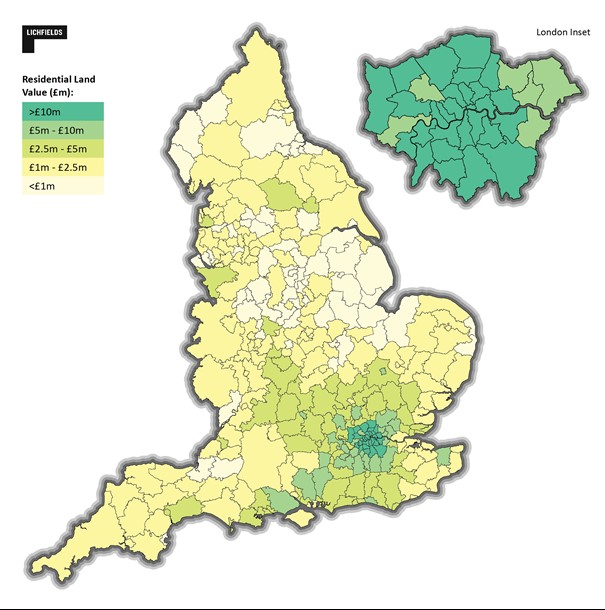 To highlight the potential impact that varying residential land values can have on BCRs, I have run a test scenario based on:
The results of the test scenario at the regional level are presented in the bar chart below. Despite the assumption that development occurs at a density of 269 dwellings per hectare, the intervention on average in London would generate a higher BCR (7.6) than the other regions. However, these averages do not highlight the wider variation that occurs with the BCRs when the test scenario is run at a local authority level. 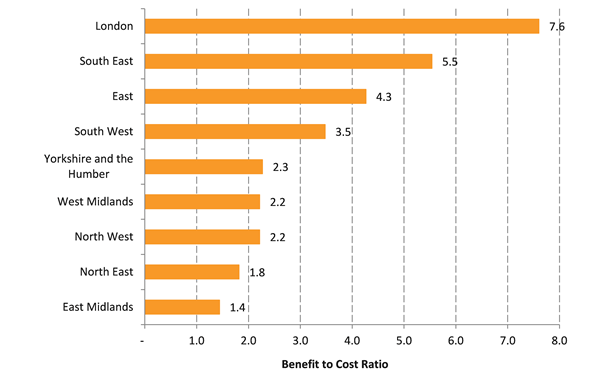 At the local authority level, the test scenario generates a wider variety of BCRs, including some which are negative, as DCLG’s residential land values for some local authorities such as Amber Valley and Copeland are lower than the regional industrial land values used in the scenario. The scenario also reveals that BCRs in London differ substantially between some inner and outer London Boroughs, as shown on the inset map below. 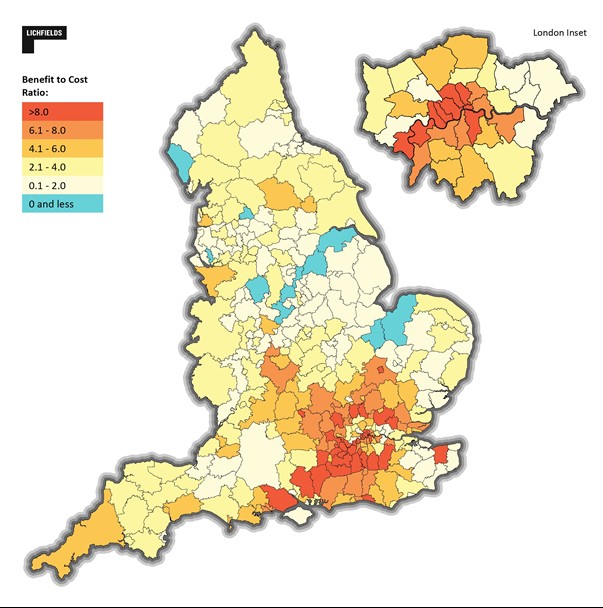 My analysis here is only based on a single set of assumptions and, in reality, the type and scale of intervention and the level of land use change could vary substantially. However, it does at least provide an indication that the DCLG guide’s benchmark land values and appraisal methodology may disadvantage some areas because of land value differentials; this is an important factor when assessing the benefits of public sector interventions.
This situation could evolve in the future as the Government’s recently published Industrial Strategy provides some indication that appraisal methods will in future be required to take account of a ‘rebalancing toolkit’, to address the fact that the benefits of investment cannot necessary be measured in narrow land value terms across all parts of the country. While no time frame is given for when a revision might happen, from my perspective it illustrates the need to take account of a range of wider economic impacts when appraising the case for a public sector intervention.