Tabitha Knowles 13 Jun 2018
New laws[1] for drone[2] operators were recently announced by central government, restricting drone flights in the UK to under 400 feet[3] and prohibiting devices within 1km of an airport boundary[4]. Failure to comply will be a criminal offence and could result in an unlimited fine, up to five years in prison or both. In addition, owners of drones weighing 250 grams (that’s the equivalent of a block of butter) and over will need to register details of their drones with the Civil Aviation Authority (CAA) and users will have to sit safety awareness tests. These new rules apply to recreational and commercial operators – including those amateur flyers tinkering with their ‘cheap and cheerful’ purchased from their local Argos store.

What is driving these new laws?

These new rules are aligned with the aims and objectives of the ‘Grand Challenge’ for the ‘future of mobility’, which was set out in the Government’s ‘Industrial Strategy’[5]. They follow a public consultation[6] that was run last year addressing safety, security and privacy challenges around drone technology and come ahead of the Drone (Regulation) Bill 2017-19 (the House of Commons 2nd reading is expected in early 2019). Among the measures planned for the forthcoming Drone Bill, as well as further secondary legislation amendments, are new powers for the police to order an operator to ground a drone if it’s deemed necessary. The police will also be able to seize drone parts, to prove it has been used to commit a criminal offence.
The Government says that ensuring drones are being used safely will pave the way for the devices to play an increasingly important role in society.
Demonstrating that the industry can operate safely will be key to its advancement. In the UK, drone use incidents continue to make the headlines, reinforcing public concerns about safety, privacy and security. The number of near misses between drones and aircraft has nearly tripled in the last two years, with 92 incidents recorded in 2017 alone[7].

This rapidly evolving new branch of aviation will need a set of standards to support safe, efficient, orderly, reliable and sustainable high-frequency drone operations in an already crowded UK airspace system; these new drone rules could be laying the foundations for such a future legal framework. But what should come first: regulation or technological advancement? Too much regulation too soon could potentially stifle technological advancement but not enough could limit future investment. If regulators are unable to define precise regulations without understanding the new technologies, the industry may be less willing to invest in developing them when there is uncertainty over how the technologies will be regulated. There is a need for a careful balance to be struck. 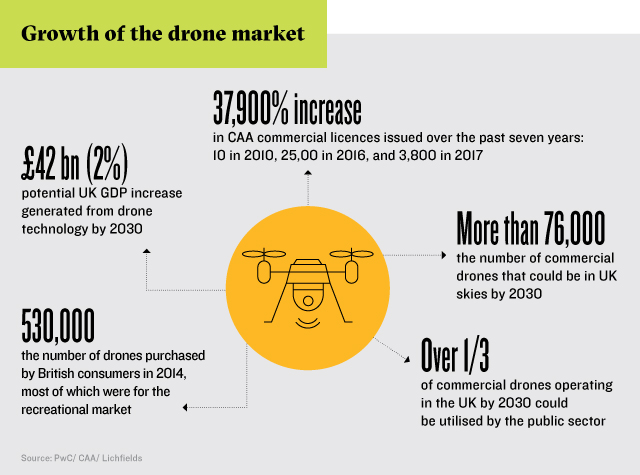 Currently, drone policy and relevant legislation are largely the responsibility of the CAA and the Department for Transport (DfT).

Civilian drone operations are regulated and enforced by the CAA. The CAA’s main legislative tool is the Air Navigation Order (ANO) 2016, which draws together legislation covering all aircraft, air traffic management, crew, passengers and cargo. The CAA primary aim is “to ensure that drones do not cause any serious aviation accident, [its] work in this area covers both consumer awareness and engagement across the industry”.

Many of the issues surrounding drones are not aviation-related and therefore fall within the remit of other statutory bodies such as the police and emergency services, Highways England and highways authorities, and local councils. To address this, the CAA has signed a memorandum of understanding with the police, DfT and the Home Office to ensure that their areas of responsibility are defined. As the range and scale of drone operations continues to grow, statutory bodies are increasingly aware of how drone operations affect their areas of responsibility and are developing specific policies and guidelines. What is not clear is whose responsibility it is to ensure all measures are joined up.

Advancement of the industry may include the full and safe integration of drones into non- segregated airspace. To achieve this requires technology, which is not yet fully developed, for sensing and avoiding air traffic under all possible scenarios. In the interim, Government policy and regulation is likely to focus on drone system reliability and enforcement, as well as training and qualification standards for drone pilots and operators. Other issues are likely to emerge, relating to privacy, security and third-party liability, to improve integration and perhaps just as important, the public perception of drones.

The UK Government and CAA are also working with international aviation bodies[8] to develop standards for the commercial use of drones, including how airlines and cargo operators use them and how they will be integrated into airspace. Autonomous Systems Technology Related Airborne Evaluation & Assessment (ASTRAEA) is a UK industry-led consortium focusing on the technologies, systems, facilities, procedures and regulations that will allow highly automated vehicles to operate safely and routinely in civil airspace over the UK. ASTRAEA’s focus is on separation assurance and control (i.e. ‘detect and avoid’ technology) and autonomy and decision making.

At a local level, the approach of local authorities towards the use of drones varies. Some have published guidance on their use in their localities, such as policies to regulate the use of drones on any council-owned land. For example, Leicester City Council prohibits the use of drones, both for recreational and commercial purposes, on Council land; this is to limit potential liability arising from the activities of a drone and its operator, including accident or injury, and because of the proximity of their land to private properties.

Currently, CAA regulation requires any camera-equipped drone operator who does not have an additional permission from the CAA to have a ground ‘footprint’ below the drone. Within this footprint there should be no uninvolved members of the public. How this is achieved in a busy urban environment is unclear. Is a formal arrangement required with the relevant authority to temporarily restrict pedestrian and vehicular access, or to restrict access to shops, dwellings and other property?

Nesta's Challenge Prize Centre, in collaboration with Innovate UK, has launched the Flying High Challenge. This is a programme to convene city leaders, regulators, public services, and industry around the future of drones in the UK cities. The objective is to help cities explore the public attitudes, logistics and safety of drones operating in complex urban environments and develop plans for drone use for their communities. Eight UK cities and conurbations are participating in this programme, including Bradford, London, Preston, Southampton and the West Midlands. Tris Dyson, director of the Challenge Prize Centre at Nesta notes “ultimately, integrating technologies like drones into the London cityscape will be as much about urban planning as it is about technological design[9]”. 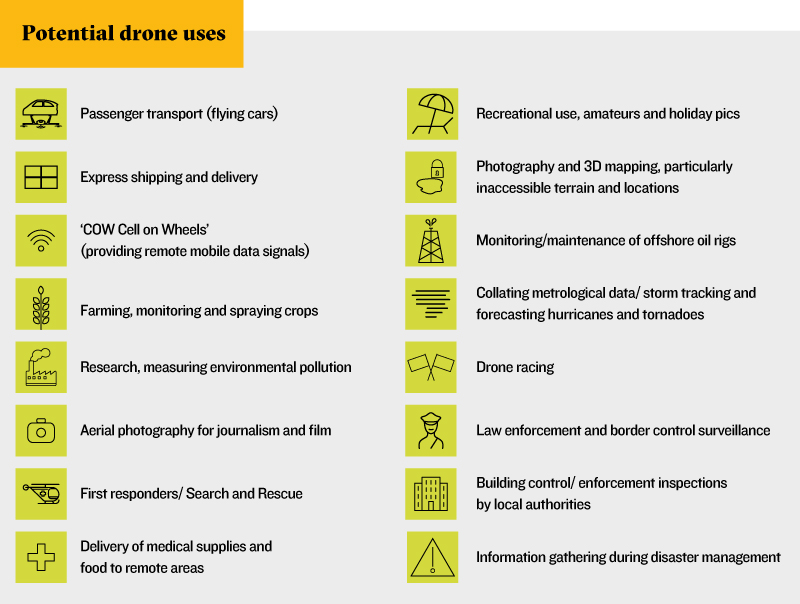 What could this all mean for planning?

To date, rules governing drones relate to the civil aviation regime, via the Civil Aviation Act 1982 and its enacting and soon-to-be-amended Air Navigation Order 2016, but not the planning regime. This means that there is no planning regulation or policy yet, guiding how the use of drones is incorporated into our environment.

This raises some interesting questions for those looking to incorporate drone operations into an existing use, or indeed to set up a standalone ‘drone-port’. Possible drone applications that immediately come to mind are distribution and warehousing facilities for transporting goods (e.g. Amazon, Royal Mail, Sainsbury’s), passenger transport ‘drone-stops’ or ‘drone-parks’ (Uber), stores for ‘COW Sell on Wheels’ (Vodafone), and re-charge facilities (TfL).

When would a material change of use occur, such that planning permission should be applied for? What would a drone facility comprise – would it be considered to be an airport, or some other type of development? Would re-charge facilities be required for drones en-route to their destinations? Who would be an affected stakeholder, if a drone development proposal came forward? What are the environmental impact considerations? Would drone facilities be environmental impact assessment development? Could drone use be encompassed within the remit of existing national planning legislation, policy and guidance? Would public safety and risk come to be considered under the planning regime – such as the DfT Safeguarding Circular (1/2003) - or would it be the responsibility of the CAA? Would drone use be a subject for local policy in a Local Plan?

As technology continues to advance and drone use increases, it will be interesting to see what roles local authorities and the planning regime will have going forward. To date, technology seems to be leading the charge; whilst policy and law is being just responsive. Nationally, planning (at least via planning policy and guidance), should get on the front foot ready for when drone-related developments do come forward.

[1] http://www.legislation.gov.uk/uksi/2018/623/contents/madeAnnounced 30 May 2018. effective in part from 30 July 2018 with the remaining from 30 November 2019, in an amendment to the Air Navigation Order 2016 (The Air Navigation (Amendment) Order 2018).[2] Drones may also be referred to as remotely piloted aircraft systems (RPAS), small unmanned aircraft (SUA), or unmanned aerial vehicles (UAVs). They come in a variety of shapes and sizes, ranging from small hand-held types up to large aircraft, and could have a multirotor, fixed wing or hybrid version mechanism.[3] The 400 feet legal maximum height limit will apply to drones weighing between 250g and 7kg. Currently, the 400ft limit only applies to drones weighing more than 7kg; craft under 7kg are guided by the CAA advisory Drone Code. The CAA notes that ‘400 feet’ relates to human optical limitations and the ability to maintain a clear line of sight of the drone.[4] Defined as all European Aviation Safety Agency (EASA)-certified aerodromes, licenced aerodromes and government aerodromes.[5] https://www.gov.uk/government/publications/industrial-strategy-the-grand-challenges/industrial-strategy-the-grand-challenges[6] DfT: Unlocking the UK's High-Tech Economy: Consultation on the Safe Use of Drones in the UK, July 2017[7] https://eandt.theiet.org/content/articles/2018/03/drone-and-aircraft-near-miss-incidents-tripled-over-last-two-years/ [8] EASA, the Joint Authorities for Rulemaking on Unmanned Systems (JARUS), the International Air Transport Association (IATA) and the International Civil Aviation Organisation (ICAO) [9] http://www.cityam.com/259457/drones-transform-our-cities-and-were-totally-unprepared