Heritage in the North East: can it be the solution rather than a problem?

Heritage in the North East: can it be the solution rather than a problem?

Isobel Jackson 27 Mar 2018
Historic buildings and sites are often seen as a burden, with high levels of risk and financial liability attached. But, in the North East, could they create opportunities and solutions, rather than problems?
Lichfields recently completed a pioneering study for Historic England looking at the economic, environmental and social returns offered by historic sites in London which have been declared as ‘at risk’. The study found that investing in such heritage assets can result in numerous benefits which go far beyond just the conservation of historic fabric, such as successful place making and regeneration, job creation, the enhancement of social facilities and vastly altered local perceptions.
The development industry in the North East is focussed on delivering the homes we need to address the housing crisis, creating jobs and promoting economic growth. But the economic context in which we are working is quite different from that of our colleagues in London. Is it possible for us to be able to use heritage assets in the same way, to realise wider economic and social benefits, and with heritage as the catalyst rather than the goal?
Is it a different picture?
Historic England compiles a register of designated heritage assets which are ‘at risk’ on an annual basis. Nationally, it includes scheduled monuments, listed buildings at Grades I and II*, places of worship listed at any grade, registered parks and gardens, registered battlefields, protected wreck sites and conservation areas. In London, the list is more extensive as it also covers Grade II listed buildings.
The graph below compares the types of heritage assets on the register in London and the North East. Most of the ‘at risk’ heritage assets in London (67%) are Grade II listed buildings, a figure which is to be expected given that 90% of listed buildings (both nationally and in London) have this grade. In the North East, scheduled monuments represent 58% of all ‘at risk’ assets, by far the majority; this category includes cairns, the remains of settlements, mining legacy features and rock art. These are features where the solution to their heritage-related needs is unlikely to be in the form of the new uses and occupation like other types of buildings and structures.
Figure 1 Proportion of assets on Heritage at Risk Register in each category

Closer similarities between London and the North East appear when Grade II listed buildings and scheduled monuments are omitted from both areas (see the graph below), while just focusing on assets in urban areas in the North East also shows a similar picture of Heritage at Risk to London.
Figure 2 Proportion of assets on Heritage at Risk Register in each category shown

This data shows that, given the parallels that can be drawn between the London and North East heritage at risk registers, there is potential for some of the benefits identified within the London report to be similarly achieved in the North East.
It also raises the question of whether Grade II listed buildings should be included on registers outside London, given the number which are probably at risk. Perhaps when considering how best to use heritage as a catalyst for economic growth, development and regeneration, a looser definition of ‘at risk’ should be applied, not just focussing just on those assets included on the Historic England register but any heritage asset - designated or undesignated - which could fall within the definition of ‘at risk’ and which, with investment, could deliver wider benefits.
Opportunities for the development industry
The map below shows a correlation between assets on the North East Heritage at Risk Register and deprivation in urban areas. The picture in more rural areas, such as Northumberland and Durham, is less clear. There may be several reasons for this pattern, including that output areas are larger in size and, as a result, areas of high and low deprivation may be averaged out. Also, most assets ‘at risk’ in rural areas are scheduled monuments which are generally at risk not because of lack of investment but due to other threats, such as agricultural practices. What is clear though is that particularly in urban areas in the North East, there is great potential for the regeneration and wider social benefits recognised in the London report to be achieved. 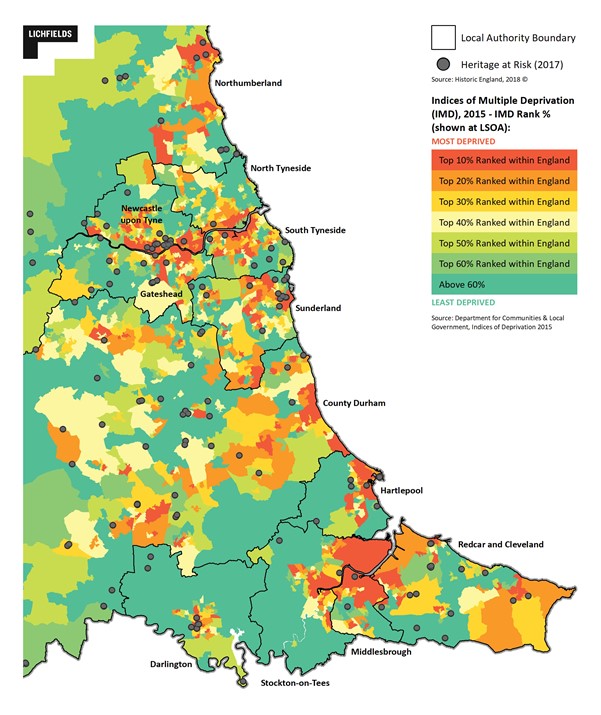 Some of the best opportunities for regeneration and wider social benefits may occur either when grant funding is available to close the viability gap between costs and the end value or financial return or, perhaps more importantly, when other benefits of investment, such as delivering economic, social or environmental improvements in line with ambitions for particular areas, can be prioritised over initial financial returns. For assets in public sector ownership, the requirement that land should not be disposed of for less than ‘best consideration’ is potentially a complicating factor and could result in missed opportunities if proposals for reuse and associated development are not explained well in relation to their consistency with planning policy, the asset’s current state of repair and its future existence and other potential non-financial and wider regeneration benefits and positive impacts.
Discussions with key individuals in the development and heritage sectors in the North East has also highlighted that to secure private investment, and perhaps reduce the need for grant funding which itself can be off-putting to developers, there is also a need for more to be done to ‘de-risk’ a heritage asset by providing greater certainty to future investors about the features which are most important and where there may, or may not, be scope for change. There is a clear role here for Historic England’s Enhanced Listing service, and/ or a detailed development brief, supported by a heritage assessment, to understand the special interest and development potential of the asset.
There are also potentially important roles for cross-funding and enabling development, which could help meet wider development needs and, through Section 106 contributions, support the conservation of heritage assets which would otherwise not receive investment without grant support. In such cases, heritage at risk may open up new sites for development which would have otherwise not been policy-compliant.
The historic environment in the North East, and in particular Heritage at Risk, presents an undervalued and underused opportunity to stimulate economic growth and help meet development needs, while also delivering wider social and environmental benefits.
Future work
The London Heritage at Risk study has identified a number of benefits of investing in Heritage at Risk and there is good reason to think that, despite the differences between London and the North East, the findings will hold true for other urban areas.
A number of potential solutions and opportunities presented by Heritage at Risk in the North East have been identified within this blog; a better understanding of the opportunities presented by investment in these heritage assets is of course still required, especially due to the different economic contexts and disparities between land values and investment returns in the regions compared with London. But the importance of the wider social and environmental benefits arising from such investment should not be understated or underestimated when compared with economic outputs which are easier to quantify. A tool to assess, quantify and share these would clearly be of huge benefit. Watch this space…!