Helen Ashby-Ridgway 28 Mar 2018
Whilst the connection between the quality of the built environment and health outcomes has long been established, in 2012 the NPPF introduced a step change in the breadth of factors that we as place-makers should be considering as part of the planning process. Gone were the days of ‘health’ policy being limited to the delivery of a health centre, or ensuring a site can be accessed by a footpath. The NPPF recognised that the health of communities can be affected by decisions across a range of land uses, from spaces that encourage social interaction to the provision of schools, and from the delivery of social, recreational and cultural facilities to the active use of public areas. Whilst no definition of health is included in the current NPPF, the thrust of chapter 8, ‘Promoting healthy Communities’, reflects the World Health Organization’s well-recognised definition: “a state of complete physical, mental and social well-being and not merely the absence of disease or infirmity”.
Chapter 8 of the consultation draft NPPF retains this broad approach but of greatest significance, the chapter includes added emphasis on the promotion of safe communities. Overall there is a clear aim for policies and decisions to achieve healthy, inclusive and safe places. To this end, the chapter continues to promote social interaction and the creation of safe and accessible places where crime and disorder - and the fear of crime - do not undermine community cohesion. However, there is also a new paragraph on enabling and supporting healthy lifestyles through the provision, for example, of safe and accessible green infrastructure, sports facilities, local shops, access to healthier food, allotments and layouts that encourage walking cycling.
By far the most significant proposed change in this chapter (and one that reinforces its new title) is the introduction of a paragraph to promote public safety and to take into account wider security and defence requirements (paragraph 96). The proposals are unfortunately responding to our modern reality that attacks do occur (thankfully relatively rarely in the UK). Whilst back in July 2017 the Chief Planner reminded local planning authorities of the role the planning system plays in ensuring appropriate measures are in place in relation to counter-terrorism and crime prevention security, national policy has been restricted to general paragraphs on crime in Chapter 8. The draft NPPF is now more explicit and introduces two elements to the proposed policy:
In terms of the first element, the draft NPPF helpfully provides examples (but not an exhaustive list) of relevant locations as a footnote (Footnote 32). There are some of these developments that are more obvious for assessment (e.g. sports facilities and places of worship) but the need to assess restaurants is perhaps less so. However, the examples reflect the sectors identified in the Crowded Places Guidance (2017) published by the National Counter Terrorism Security Office and highlights that having better security for all these areas makes it harder for terrorists to plan and carry out attacks as well as reducing the risk of other threats such as organised crime. 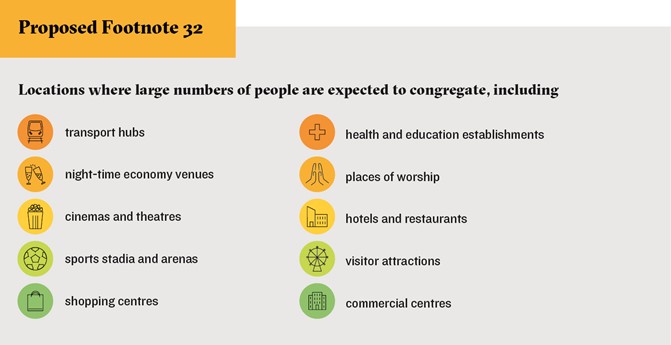 For crime prevention reasons, we are already familiar with the careful choice of what information (such as internal layouts) to include on submitted plans, but these proposed assessments will require more in-depth consideration and analysis. Applicants and their consultant teams will need to work closely with local police, counter-terrorism security advisors and local authority emergency planning teams as part of the pre-application stages of a project. Having worked on a similar statement in the past, confidentiality is key; many of these discussions are likely to take place behind closed doors and the final assessments will be published in confidential reports. The Crowded Places Guidance is an excellent starting point for developers and their design teams.
Turning to the remainder of the chapter, the other main proposed change relates to estate regeneration (paragraph 94). It states that planning policies and decisions should consider the social and economic benefits of estate regeneration (which can include better homes, improvements to neighbourhoods, new community facilities, training and employment and more). The draft Framework also states that local planning authorities should use their planning powers to help deliver estate regeneration to a high standard. It’s clear that the Government links estate regeneration to improved health outcomes. However, the need for close engagement with the community is arguably not one of the Government’s priorities – a notable difference when compared with the London Mayor’s recent consultation on resident ballots, and draft paragraph 153 which introduces the need to consider community views on the acceptability of wind energy development.
In discussing national planning policy on health, it is noted that the draft revised NPPF does not introduce any new requirement for Health Impact Assessments (HIA) to accompany planning applications. However, from experience we know that local planning authorities are increasingly issuing guidance on creating healthy communities and making HIAs an application validation requirement for a range of development proposals. In the context of extreme fiscal challenges, the NHS, Public Health England, local authority teams and government departments continue to look at prevention measures across all policy areas. As such, it is expected that the number of local planning authorities that require the health implications of proposed developments to be assessed at application stage will rise further, as more post-NPPF plans are adopted.
Overall, promoting healthy communities is staying very much on the Government’s planning agenda but with a new focus on national security and defence, beyond what has been seen before.
See our other blogs in this series:
National Planning Policy Framework review: what to expect?
Draft revised National Planning Policy Framework: a change in narrative
NPPF consultation proposals – what could they mean for town centres?
NPPF consultations – what could they mean for designers?
Draft NPPF: heritage policy is conserved…
Draft NPPF: implications for aviation?
Draft NPPF: Business as usual? 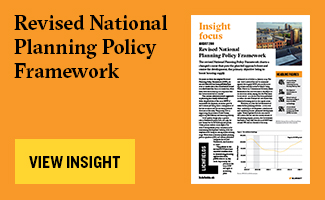 Lichfields will publish further analysis of the consultation on the revised NPPF and its implications. Click here to subscribe for updates.