Should zoning be introduced in England?

Should zoning be introduced in England?

Think Tank 14 May 2018
We can all agree on the fact that the English planning system is a very flexible one; however, in recent times there seems to be a growing trend towards wanting increased certainty from the planning and development process. Examples can be found in the draft London Plan (the ‘fast-track’ application route not requiring viability assessment) or in the draft revised National Planning Policy Framework (promoting testing viability at plan-making stage and not on application), to name just two initiatives in recent consultation documents.
This interest in increased certainty in planning derives from different, current challenges, such as the need to increase housing delivery to 300,000 homes/ year by the mid-2020s, or to find new ways to fund affordable housing and infrastructure delivery which are more responsive to the actual needs of communities. In turn, this desire for more certainty translates into proposals for a more robust role for development plan documents (and plan-making in general), as opposed to ad-hoc determination of planning applications.
Zoning is sometimes mentioned as an alternative approach to the current planning regime in England that could address these issues, being another way of managing development through planning by providing increased certainty from the outset - especially as zoning systems are already used by many western countries around the world (in different forms).

Let’s start with the basics: zoning is a land use planning practice which focuses on ‘dividing’ a local authority’s area into different parts where some uses are permitted, while others are forbidden by right. As the RTPI explains[1]:
‘A complex series of binding rules have to be set down within which development can occur. Such rules can be laid out for existing developed areas, as well as for new development areas. Developers have to comply with the rules, with limited freedom to build or change use, as long as their proposal complies with the rules set out which are legally binding.’
Accordingly, there are two main tools which define each and every zoning system: a zoning map; and legally-binding zoning regulations.
The zoning map shows a local authority’s territory ‘covered’ by the different land use zones (‘zones’) that regulate its development. The zones are usually identified at block/neighbourhood level.
The zoning regulations set out what is allowed/ prohibited in each zone. They usually are in a text-based document which contains the rules that regulate development in each zone, while also identifying acceptable levels, parameters and mandatory requirements (usually as a range) in terms of density, building height, distance from other plots, and other detailed aspects of development.
The combination of the zoning map and regulations set out the different uses (and quantities and parameters of those uses) that are permitted by right in different parts of a town or city. Once the local authority is satisfied that a development complies with the zoning rules, the permitted development can usually proceed following the submission of a construction start notice. Most uses in a zoning system fall (or should fall) within those permitted by right; however, certain zoning systems allow for ‘special’ and/or ‘conditional’ uses, which are exceptions to the zoning rules, and which usually are dealt by imposing stricter controls and/or through standard planning permission routes. 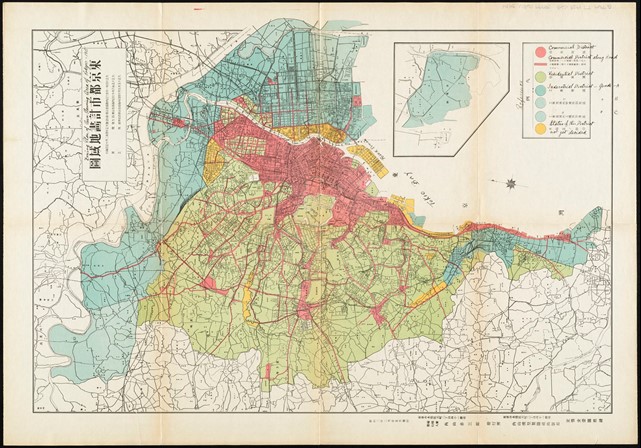 2. There is no one zoning system

Another crucial point about zoning, which often causes a lot of confusion, is that it is not a ‘one and only’ system, but rather a variety of different approaches which fall under the same ‘umbrella’. There are different objectives and goals underpinning each and every zoning system, as the urban development goals could be very different in, let’s say, New York City or a Bavarian village.
There are many ways of comparing systems, for example by looking at:
For example, in most of the United States, Euclidean zoning[2] applies, where zones are decided at local authority level. They are of an exclusive nature, meaning that parameters are very strictly set and generally do not allow complementary uses. US zoning is often also strongly non-hierarchical, meaning that the most protected uses (such as residential) are not allowed in ‘lower’, less protected zones (such as commercial, or light industrial) as a direct consequence of a detailed approach to zone definition and going against a mixed use approach. In terms of the number of zones, this is usually very large due to their detailed nature; in New York City, for example, there are 21 basic Zoning Districts, each having additional sub-categories for specific requirements (which are listed in the 4,300+ page long Zoning Resolution).
In Germany, at the other end of the spectrum, zoning frameworks are agreed at federal level, while states (i.e. regions) and local authorities retain powers to make specific provisions for their own areas. The German approach is inclusive, meaning that each zone allows a predominant use (such as residential), while also considering other complimentary uses (such as small shops) as appropriate - effectively supporting a mixed use approach. The German approach is also hierarchical in nature, meaning that ‘higher’ uses (such as residential) are allowed in all the zones, as long as this does not harm the living conditions of residents (in terms of their exposure to externalities, such as noise or air pollution). Finally, in terms of number of zones, the German federal zoning framework (‘Baunutzungsverordnung’ a.k.a. ‘BauNVO’, or Land Utilisitation Ordinance) identifies four basic land use classes, which are then divided into 10 sub-classes.
In short, there is no such thing as THE zoning system, but rather a series of zoning systems with their own specific features. 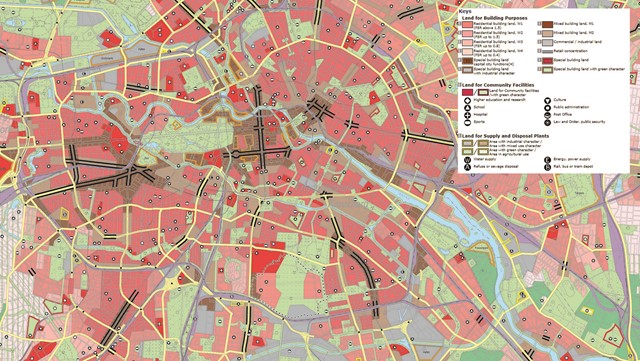 First, it is important to underline that each stakeholder involved in the planning and development process (housebuilders, land promoters, local authorities, communities, etc.) has very different aspirations and goals that they aim to achieve through the planning system. Accordingly, looking at zoning pros and cons really links to which stakeholder’s point of view is being taken.
Bearing the above in mind, the main advantage of a zoning planning system seems to be the provision of greater certainty from the outset, through the establishment of a quantum of acceptable permitted development via the zoning map and regulations. This means that the development potential is recognised for each and every parcel of land, without the need to apply for establishing land use, scale etc.; this significantly reduces the scope for any hope value and, as a consequence, tends to fix the overall value of land (if the development potential is fixed, then also the underlying land value will be more certain).
On the other hand, this greater degree of certainty is in direct opposition to what many believe is the best feature of the English planning system - its flexibility and adaptability to specific local circumstances at any point in time. Here it is important to underline what should be obvious, that there is a trade-off between certainty and flexibility and that, by definition, zoning is not a flexible planning system (or at least, not as flexible as the English plan-led one).
Furthermore, zoning systems require a great many regulations to deal with permitted/forbidden uses in each zone, related parameters and standards, and possible exceptions; this increases the legislative complexity of such systems in a very significant way. As such, the introduction of a zoning system could hardly be coupled with any intention to cut red tape.
Other opportunities could arise from the introduction of a zoning system in England however, such as: 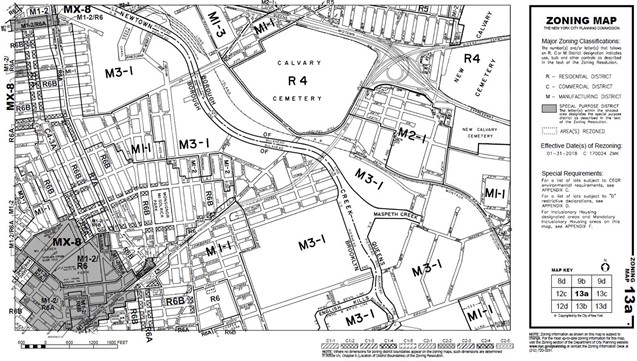 4. What could the effects/consequences of zoning in England be?

If a zoning system were to be introduced in England, it is naturally difficult to predict ‘on paper’ but let’s look at some potential consequences - here are just four to start with: 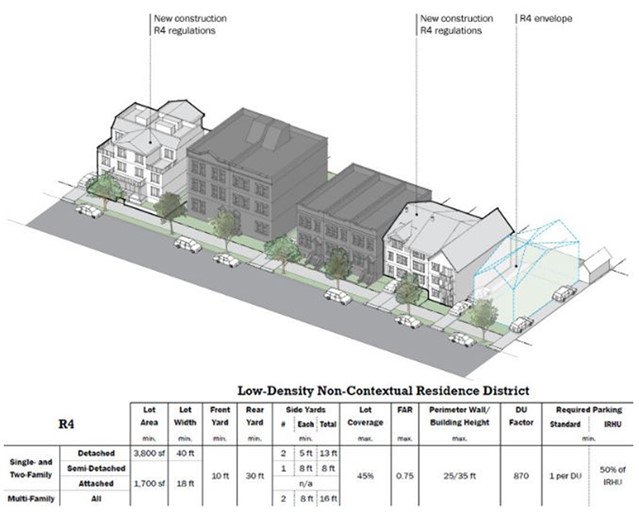 5. Which are the zoning-type tools currently in the English planning system?

A recent study commissioned by the RTPI on planning risk and development[3] highlights how certain planning tools - Permission in Principle in particular - already exist and attempt to provide greater certainty within the English planning system. In addition to the more recent Permissions in Principle and brownfield land registers, there are permitted development rights (PDRs), and local development orders too.
However (with the exception of PDRs), the newer zoning-type planning tools need to be effectively tested in practice, and significantly strengthened, before they can become a valid alternative to more long-established (i.e. ‘safe’) planning routes to development delivery. These tools do however already represent a good starting point for testing stakeholders’ appetite for increased certainty in the planning regime, and how much they are willing to accept different trade-offs (more certainty comes at a cost).

Illustrative framework and parameters for Berlin’s residential land W1, 2007 (copyright: Senatsverwaltung für Stadtentwicklung und Wohnen, available online)
This broad-brush overview cannot provide any detailed answer as to how zoning could potentially impact the English planning system. However, and in light of the recent policy proposals made by the Government and the Mayor of London (particularly viability assessment at plan-making stage), the time seems right to at least consider alternatives to what many see as a dysfunctional planning system.
While a radical overhaul of the existing planning system in England to introduce zoning does not seem either viable or desirable, particularly in light of the many uncertainties and few advantages identifiable, testing alternatives is the normal course of action when wanting to change and improve something.
To conclude, there are few points which are worth bearing in mind.
First, time matters, and whatever improvements are sought, the timeframe needed to reach the final outcome has to be considered.
Secondly and linked, transitional arrangements will be crucial; as much as the final outcome could be the most desirable, due consideration needs to be given to how to get there, and whether the benefits of moving towards zoning are wide enough to counterbalance the inconvenience and unintended consequences of transitioning.
And finally, what is wanted from a planning system is ultimately a matter of choice; if the development sector values flexibility, then the current English planning system is probably the right one (though not the ‘perfect’ one); on the other hand, if more certainty is the goal then moving towards a stronger zonal approach could be a way forward. What is clear is that it is not possible to have the certainty that zoning provides, and the flexibility the English planning system allows, both at the same time.

[1] RTPI Consultation Response (2011), How change of use is handled in the planning system[2] From a town named Euclid in Ohio, not in honour of the Greek mathematician[3] RTPI Research Paper (April 2018), Planning Risk and Development: How greater planning certainty would affect residential development