All change on local housing need: the standard method’s next iteration

All change on local housing need: the standard method’s next iteration

Lachlan Anderson-Frank 26 Sep 2018
Household projections have been a core input to assessing housing need since at least 1977, when the Housing Services Advisory Group of the old Department of the Environment advocated what it called the total stock/household method. This didn’t change in the initial version of the standard method released last year, which combined these projections with a second input: an uplift based on the affordability ratio (a measure of median house prices versus median annual wages). But for any method to have credibility as a measure of need, the Government needs to be confident its inputs remain fit for purpose.
The Government’s new 2016-based household projections, released September 20th, 2018, revised growth across England downwards by approximately 24%, from 210,000 to 159,000 annually. When combined with affordability ratios to form the standard method set out by Government in September last year, they appear to wildly underestimate the number of homes needed in some areas. These include local authorities with severe affordability pressures, particularly those in London and the South East such as Essex, Hertfordshire, Buckinghamshire and Surrey; as well as ambitious urban areas in the Midlands and the North - where adequate housing is needed to support economic aspirations; and areas with both affordability and job pressures such as Oxford, Cambridge and Milton Keynes.
For example, for Hertfordshire and Essex, the new household projections produce a standard method figure some 3,215 homes lower than previous estimates up to 2028, which could jeopardise plans being brought forward jointly for three new garden communities. Surrey too saw a reduction in its standard method figures of close to 32% over the next 10 years. Further north, the Greater Manchester Spatial Framework currently sets out a target of 227,200 homes to 2035, but the new Local Housing Need (LHN) figure estimated from the 2016-based household projections would be 73,600 homes less than that.
Similarly, the Government has proposed a target of up to one million new homes across the Cambridge-Milton Keynes-Oxford (CAMKOX) Arc, but under the current standard methodology, delivery could be just 70% of that to 2050. These gaps in delivery against planned targets add up to a significant potential shortfall when compared with the Government’s stated aim of delivering 300,000 homes per annum by the mid-2020s.
One reason why the affordability uplift was included in the standard method was because this approach allows Government to ensure areas with the greatest problems of affordability carry the greatest burden of increasing the supply of new homes. The hope is that this will help to ease affordability pressures, and by extension, increase rates of household formation. There is extensive evidence that a sustained boost of supply nationally in the order of 250,000 - 300,000 per annum, with bigger uplifts in the least affordable locations, will – alongside other measures – boost affordable supply in the areas that most need them, and also help to moderate the growth of house prices relative to earnings growth, thus improving the relatively affordability of housing.
The chart below demonstrates why this adjustment is necessary: the revised household projections would, without adjustment, suggest that many areas with very high affordability would have LHN figures that imply they should not build as many homes as indicated by previous projections. Indeed, there is a slight positive correlation between less affordable areas and greater reductions in the revised household projections, which could reflect the downward pressure on population growth and household formation rates created by high affordability ratios.
Figure 1: Correlation between household projection revisions and affordability ratios 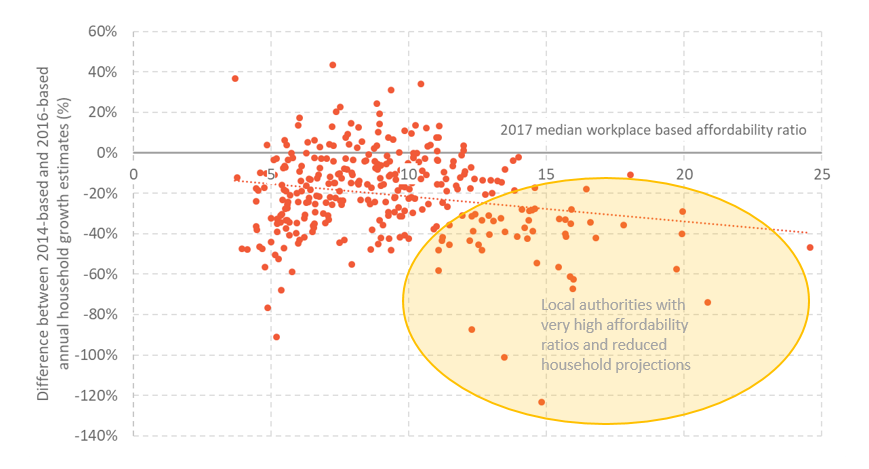 Indeed, areas with the most extreme affordability ratios, i.e. those local authorities where average house prices were more than 10 times local earnings, highlighted in the figure above, have among the biggest reductions in household growth compared with previous projections; alongside areas with the lowest affordability ratios, suggesting much less demand. And in some locations - many highly unaffordable - the new projections create seemingly perverse results; for example negative levels of household growth in Cambridge, and de minimis growth in Oxford[1]. If the result of the new projections was to reduce the amount of housing planned for in those areas, that would clearly be counterproductive to the public policy goal of increasing housing supply in the least affordable areas, and would make the 40% cap on the level of uplift similarly difficult to rationalise.

For areas not experiencing extreme affordability pressure, but which may have a need for housing for other reasons, such as employment, there is nothing in the standard method formula to account for this. However, the NPPF 2018 sets out clearly in Paragraph 81 the need for planning policies to “set out a clear economic vision and strategy which positively and proactively encourages sustainable economic growth…[and] seek to address potential barriers to investment, such as inadequate … housing”.

Furthermore, recently updated Planning Practice Guidance (PPG) on Housing need assessment makes explicit that “The Government is committed to ensuring more homes are built and are supportive of ambitious authorities who want to plan for growth.” It goes on to establish that the standard method is only a minimum starting point, and circumstances may arise where actual housing need may be higher than the standard method figure. The PPG provides specific examples including where growth strategies and Housing Deals are in place, where need may be higher, as well as a range of back stops, including past delivery levels and recent SHMAs, which should prevent new, lower household projections unduly influencing housing targets in forthcoming local plans downwards.

This guidance perhaps lacks the ‘bite’ that some in the sector have been seeking to militate against what some local authorities have been doing: using the standard need method to reduce their estimates of housing need (examples include Richmondshire[2], Wirral[3] and Great Yarmouth[4]). However, local and strategic plans will be examined on this basis from January 2019, and they could face difficult examinations if their plans have a clear disconnect between ‘do minimum’ housing plans and ambitious employment growth visions.

More generally, we know the Government will be consulting on revisions to the standard method to recalibrate its approach to get back towards the 300,000 homes per annum figure. The question remains as to how they propose to do this. It will be important they get it right – it will be local plans produced over the next 2-3 years that will allocate the sites that will be delivering homes in the mid-2020s and thus be critical in meeting the Government’s aspirations.

Revised NPPF: a new beginning at the end of a long and winding road?