Harry Bennett & Martin Taylor 02 Dec 2019
We’ve been digesting the Inspector Panel findings and the potential implications following the examination of the London Plan. You can view our thoughts on other topic areas here but below we take a look at the all-important issue of housing.
On housing, the Panel report finds that the 2017 SHMA provides a reliable starting point for the housing needs of London, agreeing that 66,000 additional homes per year is properly calculated, a need of 660,000 homes over 2019-2029. But in respect of meeting that need, the Panel’s findings diverge from the Mayor’s approach which relied heavily on theoretical small site capacity modelling contained within the SHLAA. The submitted new London Plan (‘NLP’) proposed a 10-year capacity-based target of 649,350 homes with a target for 245,730 on small sites (below 0.25 hectares in size). But the Panel recommends cutting the small sites target to 119,250 and hence overall delivery target to 522,850 (a 19.5% reduction) citing that they are “sceptical about the delivery” from small sites and that the assumed delivery from this source was not “realistically achievable”.
This cut has a disproportionate impact on outer London where the SHLAA assumed most of the small site capacity could be found - at one extreme, in the case of Bromley 72% of its housing target was made up of small sites alone. While the reduction to London’s total small sites target is 51%, this corresponds to a 61% reduction to the small sites housing targets in outer London compared to a 26% reduction in inner London, with many of those boroughs seeing no or minimal cuts (see map below). At a local scale, Bromley and Richmond’s overall ten-year housing targets have in effect been halved and as an example Havering’s overall target has fallen near a third. 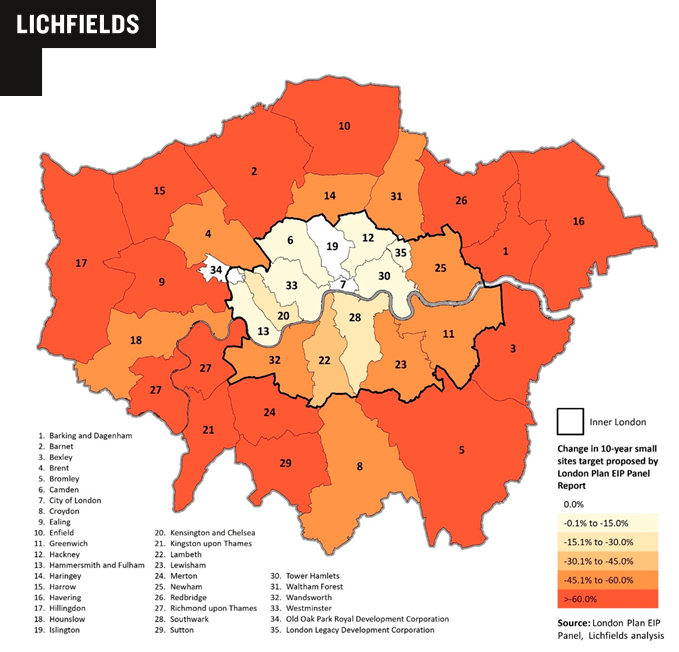 Despite the cut, the revised figures would still represent a 14% increase in delivery from small sites compared to the 2004 to 2016 trend for London as a whole (see table below), a still stretching target which would undoubtedly see a keen focus on increasing density at the neighbourhood level. Interestingly, the recommendations actually represent a 5% decrease on the 12 year trend for inner London boroughs. 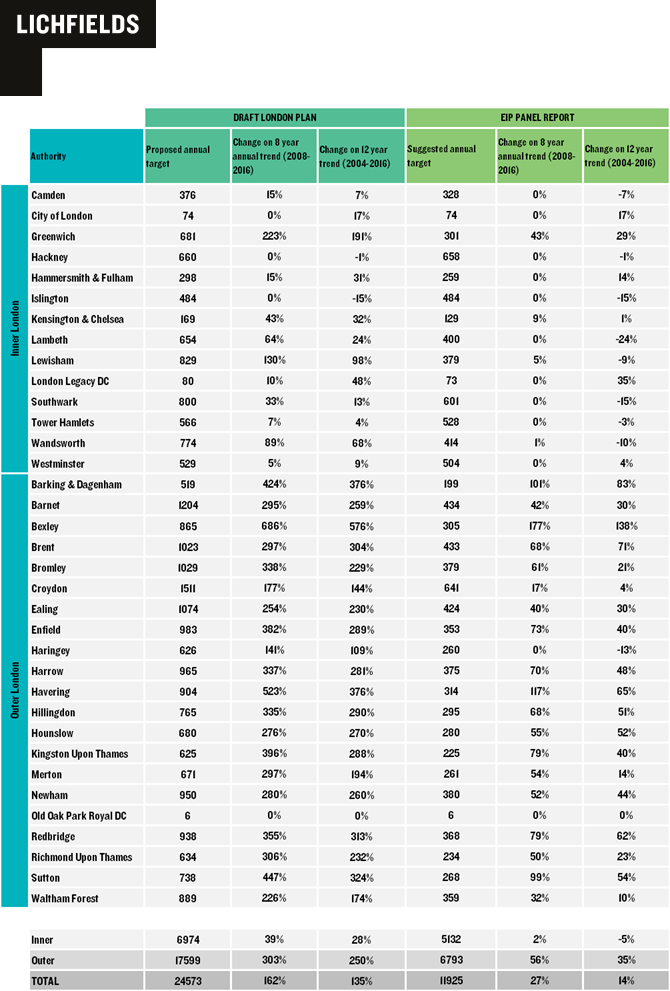 Flowing from the headline number, the Panel report confirms the principle of the housing requirement operating as 10-year targets, rather than annualised numbers, with a need for the Mayor to take a leading role in setting a trajectory for how that target will be met. Initial analysis by Lichfields indicates any trajectory will need to ramp up delivery over the decade from 32,000 new homes last year, to close to 70,000 homes per year by 2028-29: doubling output over the life of the Plan (see graph below).The implication of this suggested reduced housing target is an increase in London’s unmet housing need, particularly in outer London boroughs, which under the Panel’s recommendations would crystallise at c.14,000 homes per year. The Panel highlights that “it is a major concern that the targets are so far below the assessed need”, but whilst noting that addressing the issue would likely require considerations of Green Belt review or co-operation with local authorities in the wider south-east indicate it is better to “proceed on the basis of an adopted plan rather than one that is in limbo.” This of course leaves wider questions for how that unmet need could and should be reflected in Local Plans progressing across London and the south east. 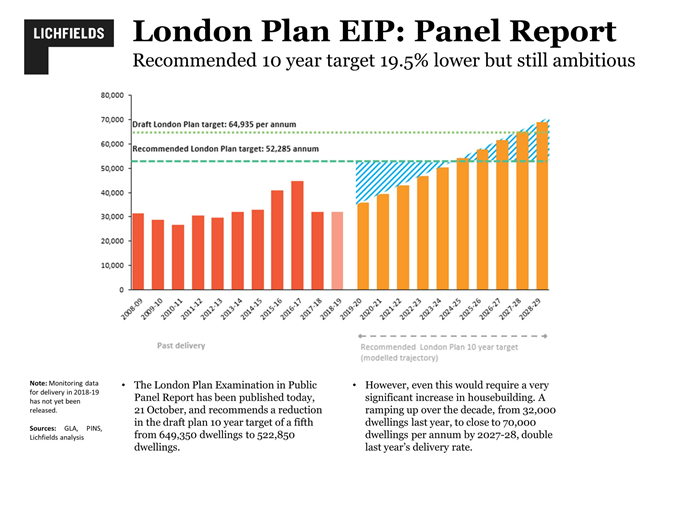 Important for plan-making at the Borough level is that the Panel conclude ‘rolling forward’ the proposed housing targets over a longer period would not be effective. This has to date been usual practice to come to minimum 15-year targets for Local Plans. The panel recommends a change such that housing targets beyond the 10-year period should be adjusted, among other considerations, to take consideration of “local evidence of identified housing capacity”. This will likely see stepped targets in Borough’s Plans and it will be interesting as to how differing authorities interpret this requirement to consider longer term capacity; some might seek to be more expansive in how they define their local capacity (perhaps hand-in-hand with potential Green Belt reviews), whilst others might seek to be more restrictive in defining this, with any targets beyond the 10-years reverting back towards something akin to a small sites windfall allowance. Either way, the panels recommendations would place this firmly in Borough’s hands, deleting the requirement for this process to be “in consultation with the GLA”.
Finally, a number of key housing points remain unchanged or are agreed with by the Panel. These include:

Following the previous Further Alterations to the London Plan in 2015, and despite the Panel’s recommendations, this still represents a further step-up in the targeted delivery of homes in London. However, the clear implication and conclusion from the Panel is that this London Plan will not result in ‘homes for all’ and still leaves some unanswered questions as to how the gaps between current housing delivery, the increased housing targets and the higher still housing needs will be bridged.
See our other blogs in this series:
In search of London’s future industrial land
Lichfields will publish further analysis on the London Plan Panel Report and its implications in due course.
Click here to subscribe for updates.