Sally Furminger & Steven Butterworth 05 Dec 2019
Once again London’s housing requirement is recommended to be a capacity-based figure, rather than one meeting local housing need (as required in the rest of the country). With proposed amendments to the housing requirements (see our previous blog) the gap between housing need and housing target will be c. 14,000 dwellings per annum (dpa). To help address the ever-increasing backlog, the panel recommend a comprehensive Green Belt review.
This blog addresses the above findings of the Panel who examined the draft New London Plan and reported on it, last month. We commend the recommended Green Belt review and explore a number of (as yet) unanswered questions on its deliverability.

In seeking to answer how best to accommodate London’s strategic development needs, the Panel asked: ‘‘Should some of London’s development needs be met through reviewing Green Belt and Metropolitan Open Land?”.
The resounding finding of the Panel is: yes…but not yet…not as part of this New London Plan. The Panel concludes that:
“…the inescapable conclusion is that if London’s development needs are to be met in future then a review of the Green Belt should be undertaken to at least establish any potential for sustainable development.” (para 457); and,
“given our conclusions about the ability to deliver housing and industrial development within London it would be wrong to unilaterally rule out changes to the Green Belt.” (para 460)
The Panel’s recognition of the need for a Green Belt Review followed similar calls and evidence from multiple parties during the EiP[1]. Its recommendation represents an opportunity to do more to meet London’s strategic needs through a plan-led approach to unlocking sites in locations where development is urgently needed, rather than the present reliance upon planning by appeal[2]. It also provides the potential to identify larger Green Belt land releases which could become new growth areas.

It would appear from the Panel’s questions and report that this review would equally apply to the capital’s Metropolitan Open Land (MOL).  And so it should.
The rein to review the performance of both Green Belt and MOL land across London would be loosened by the Panel’s recommended changes to Policies G2 and G3, to remove the blanket provision that de-designation of both GB and MOL will not be supported. The recommendation is to ensure consistency with national policy, requiring reference to de-designation only in ‘very special circumstances’[3].

To avoid a ‘limbo’ situation where-by the Plan would be delayed, the Panel recommends that the Mayor leads a ‘‘a strategic and comprehensive review of the Green Belt in London as part of the next review of the London Plan’’ (PR35) (our emphasis).
The Panel suggests (para 596), the earliest date for a draft Plan would be at the end of 2022 (albeit noting the Mayor suggests summer 2023). It goes on to conclude: “…there would be little to be gained from requiring an immediate review until such time as a full review of London’s Green Belt has been undertaken as recommended to assess the potential for sustainable development there and whether and how the growth of London might be accommodated. Therefore we make no recommendation that an early or immediate review of the London Plan should be carried out” (para 599) (our emphasis).
The effect of that ought to mean an immediate review of the GB & MOL, so as not to delay the subsequent review of the Plan itself. Completion of that GB/MOL Review within 1-2 years from adoption of the New London Plan is achievable and necessary.

The Panel is silent on how the review should be undertaken, save for recommending that an effective Green Belt review in London would ‘likely’ involve joint working and positive engagement with adjoining authorities and boroughs (para 454). It is left to the GLA to indicate the means by which the comprehensive review is to be undertaken in the New London Plan (PR35), albeit they ask for a central methodology to be devised by the GLA, to ensure consistency.
In our (Lichfields) submissions to the Panel, we argued that a comprehensive review of Green Belt and MOL must be undertaken in each Borough with the objective being to determine whether there is (or isn’t) designated land which does not meet one or more of the ‘purposes’ and should therefore be released for housing or other development needs – the Panel identify there to be a medium to long term need for more industrial development (para 453). 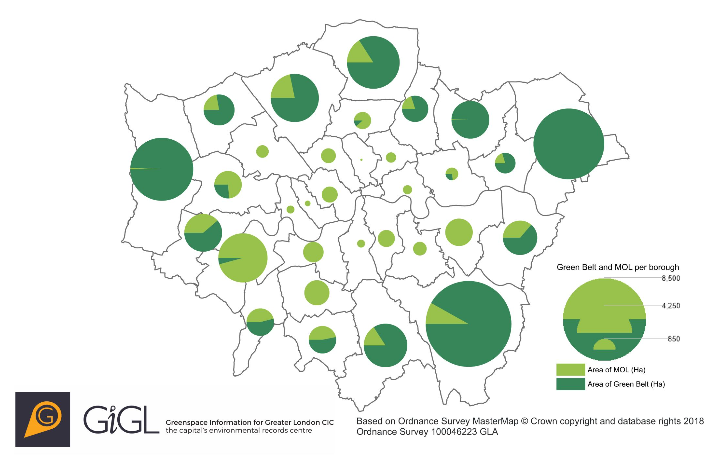 We suggest that the GLA ought to consider which of the London boroughs have already undertaken reviews of GB/MOL land and whether these are up to date having regard to the GLA’s future central methodology.
Lichfields has recently undertaken a review of all (19) outer-London Boroughs to identify which had undertaken reviews of their Green Belt and/or MOL land to support either adopted or emerging local plans. Our review found that:
This leaves eight boroughs that have not undertaken a review to support either emerging or adopted local plans.
Figure one: Green Belt/ MOL Reviews undertaken by Outer London Boroughs. 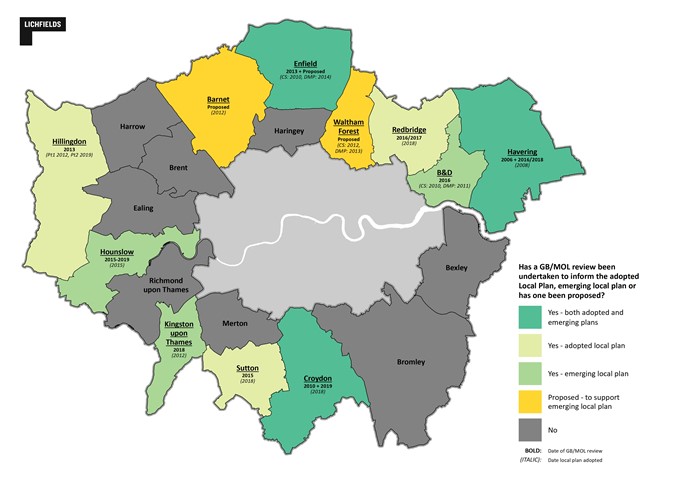 It follows that, whilst all London Boroughs should be required to undertake a review using consistent methodology, the GLA might first focus attention on those outer London Boroughs with the highest proportion of GB and MOL land, that have not undertaken a GB and/or MOL review to support either an adopted or emerging Local plans.
Notably this would be Bromley where 56% of the land in the borough is currently designated Green Belt or MOL. The seven other boroughs in this category are Bexley (27%), Brent (7%), Ealing (21%), Haringey (17%), Harrow (28%), Merton (26%) and Richmond (54%). In addition, Hillingdon (43%) and Sutton (26%) last undertook Green Belt and/or MOL reviews c. 5 years ago and so, arguably, have not ‘recently’ done so.
The key implication of the Panel’s recommendations is that the pressure to review how Green Belt or MOL sites perform against the designation criteria is likely to increase. A discerning move for developers involved in land acquisition could be to seek options for acquiring inappropriately designated or poorly performing Green Belt or MOL sites that are suitable for housing or industrial development, particularly in those boroughs who have not recently undertaken a review of this land.
We do hope the Mayoral team will appreciate the priority that ought to be given to an immediate Green Belt and MOL review, when providing the Mayor’s response to the Panel’s recommendations and the ‘Intend to Publish’ version of the London Plan at the end of December. This requires early establishment of an assessment method, so that the potential for releases to provide for sustainable development can inform the next London SHLAA and subsequently the Plan itself.
See our other blogs in this series:
In search of London’s future industrial land
New London Plan Panel Report: Homes for all?
Lichfields will publish further analysis on the London Plan Panel Report and its implications in due course.
Click hereto subscribe for updates.