Jennie Baker 28 Jan 2019
Lichfields is currently monitoring the draft London Plan Examination in Public (EiP), which is scheduled to last until May 2019, and will report on relevant updates as part of a blog series. The first blog of the series focuses on the hearing session for M16 ‘Wider South East and beyond’, which took place on 25 January 2019.
The draft London Plan was submitted for Examination in Public (EiP)[i], and is currently being assessed against the policies included in the original NPPF (as per revised NPPF paragraph 214). This means that the Mayor of London does not have to comply with new requirements to prepare Statements of Common Ground for his draft London Plan; he had indeed provided none, despite undertaking informal working with Local Authorities outside London.

Whilst the Greater London Authority’s (GLA’s) current housing need assessment highlights a shortfall of just over 1,000 dwellings per annum (1,065, specifically) when compared to the identified annual housing target (65,000 homes/year), the way the GLA plans to address such shortfall is mostly through further windfall sites rather than through more structured approaches.

Virtually all the participants to the M16 ‘Wider South East and beyond’ hearing session[ii] dismissed this narrow margin – one describing it as ‘the difference between two arbitrary figures’. Others (including the Home Builders Federation) believe that the housing shortfall will be closer to 30,000 dpa in view of the need to double or triple past windfall delivery rates, meaning that additional delivery outside London will be necessary. However, the real battle on housing number will be fought over the next two-three weeks.

In London this means that Wider South East (WSE) Local Planning Authorities will be expected to effectively volunteer to meet London’s annual housing shortfall, on top of their own housing needs; the degree of unmet need that each Authority will take would thus come out in the wash rather than be planned for through upcoming EiP discussions. Hence the expression ‘working with willing partners’ as identified through draft Policies SD2-SD3.

Whilst there were a variety of opinions on how to ‘effectively’ deal with such situation, most of the participants to the hearing session felt that a separate South East Technical Secretariat (to include MHCLG, GLA, and WSE Local Authorities) should be established. The Secretariat would be in charge of coordinating the general evidence base collection and assessment for the wider geographical area, while also assisting decision-making by coordinating housing market assessments, land capacity and practical delivery. The EiP Panel was urged to make a side commentary about this potential approach.

At the hearing session it was also highlighted how some Local Planning Authorities are effectively stepping up and coming forward to volunteer as ‘willing partners’; the Oxford/Cambridge Arc Authorities, Waverley, Ipswich and Arun are among these. On the other hand, other local authorities are staying more quiet, such as the Gatwick Diamond ones, in view of the intense local and environmental pressures they are exposed to. 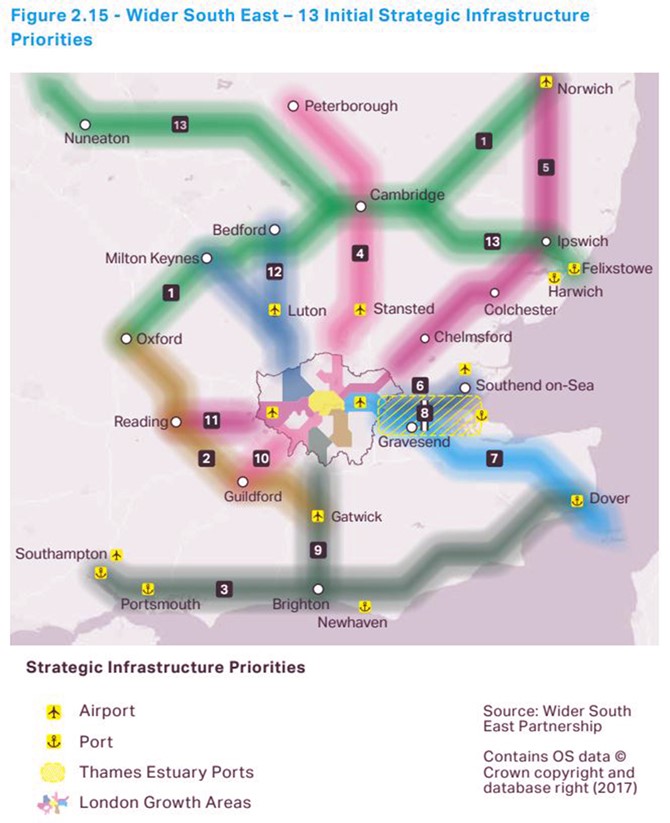 There were also concerns about the ‘Strategic Infrastructure Priorities’ highlighted by the Mayor at Figure 2.15 of the draft London Plan (see Figure above), as linking strategic infrastructure with potential growth areas was considering straying beyond the GLA (and London Plan) remit. Suggestions on this matter focused on the London Plan just indicating certain strategic infrastructure priorities within/outside London, while leaving decisions on housing and employment-related growth to the interested local authorities and/or other strategic bodies.

Finally, few additional takeaway points from the WSE hearing session are listed below:

Lichfields will publish further analysis on the draft London Plan Examination in Public in due course. Click here to subscribe for updates.

[i] Greater London Authority, Examination in Public for the draft New London Plan

This blog has been written in general terms and cannot be relied on to cover specific situations. We recommend that you obtain professional advice before acting or refrain from acting on any of the contents of this blog. Lichfields accepts no duty of care or liability for any loss occasioned to any person acting or refraining from acting as a result of any material in this blog. © Nathaniel Lichfield & Partners Ltd 2019, trading as Lichfields. All Rights Reserved. Registered in England, no 2778116. 14 Regent’s Wharf, All Saints Street, London N1 9RL. Designed by Lichfields 2019