Curtilage Listing: Where to draw the line?

Curtilage Listing: Where to draw the line?

Georgia Foy & Nick Bishop 06 Mar 2019
Curtilage listing is a notoriously confusing issue in the planning and heritage world. It was only recently that Historic England sought to provide clarity on curtilage, publishing their draft guidance ‘Listed Buildings and Curtilage, Advice Note 10’ in February 2018. However, even this met criticism initially from the Institute for Historic Building Conservation (IHBC) and other organisations for being ambiguous and based solely on theoretical examples where in reality the facts of individual cases are often critical to the legal judgements which fall from them.
This blog post seeks to shed further light on the issue of curtilage and comment on its practical interpretation with a refresher on the legal underpinnings of curtilage status, and commentary on the issues which the sector faces following recent cases.

The issue of curtilage listing is important as certain works to curtilage listed structures require Listed Building Consent and owners can face enforcement action and criminal prosecution should unauthorised works be undertaken (even if inadvertently).

After having consent refused for solar panels on a shed in the curtilage of his Grade II listed farmhouse, MP Bill Wiggins proposed a Bill in 2015 to amend the Planning (Listed Buildings and Conservation Areas) Act 1990 (the Act) by removing the reference to curtilage. This did not get further than first reading until being eventually withdrawn, but it exemplified the confusion many homeowners and conservation practitioners feel towards curtilage listing. As a result, there has been a renewed focus to clarify curtilage listing and Historic England’s Advice Note 10 was published with clear, illustrated examples. In their definition, Historic England state that “not all buildings will have a curtilage. With those that do there will be cases where the extent of the curtilage will be clear (such as a garden boundary) but in others it may not be as clear each case will always be a question of fact and degree.”

The relevant legal provision on curtilage listing seems simple: Section 1(5) of the Act states that “any object or structure within the curtilage of the building which, although not fixed to the building, forms part of the land and has done so since before 1st July 1948 shall be treated as part of the [listed] building”. In essence, the curtilage building will be subject to control through Listed Building Consent due to its contribution to the special interest of the listed building. However, in practice, assessing whether a building or structure is in the curtilage of another building is more difficult.

This is largely due to the difficulties in defining the term ‘curtilage’. Curtilage is defined by the Oxford English Dictionary as “an area of land attached to a house and forming one enclosure with it”, but the extent of the land, particularly in the case of a sprawling country estate or farmstead, and what constitutes ‘enclosure’ are often up for debate.

Section 55(2) of the Town and Country Planning Act 1990 defines land or building as within the curtilage should they be in a use that is “incidental to the enjoyment of the dwelling-house”. With curtilage listing, this is largely interpreted as the building being ‘ancillary’ to the use of the main building, as established through the Debenhams plc. v Westminster CC case, 1982.

It is also worth considering that, as the law pertaining to curtilage only came into force on 1st January 1969, should a building have been listed before 1969, then its situation should be considered from 1st January 1969 onwards. (However, this interpretation has yet to be tested in the courts).

To understand curtilage listing in practice, it is important to look at the accompanying case law.

The most important of these is the Attorney General ex rel Sutcliffe v Calderdale MBC, 1982, in which LJ Stephenson was asked to determine whether a row of terraced cottages associated with a listed mill could be considered to be within its curtilage and therefore subject to the special protection listing affords.  LJ Stephenson established three tests to determine curtilage listing:

On the basis of these tests, he concluded that the terrace was curtilage listed as it was: attached to the mill by a corridor at one end and formed an enclosure with it; historically in the same ownership and at the time of listing; and built to serve the mill functionally. This case thus determined that the curtilage of a listed building includes “any related objects or structures which naturally form, or formed, with the listed building an integral whole” (Justice Stephenson, 1982). Crucially, it also confirmed that in defining curtilage, the boundaries should be determined on a case by case basis as there is no ‘one size fits all’ approach – providing that it follows the wording of the Act and considers the Calderdale tests. These tests are still used to define curtilage listing and are included in the Historic England Advice Note 10 on the subject.

Curtilage is not necessarily defined by its size and it does not have to necessarily be a small geographic area. It was decided in the case of Skerritts of Nottingham v Secretary of State for the Environment, Transport and the Regions, 1999 that “whether land was in the curtilage of a building was a matter of fact and degree. The curtilage need not be small, nor was the idea of smallness inherent in the term. The curtilage of a principal manor house, for example, was likely to include stables and other outbuildings”. Where large areas of land are concerned it is often important to look at the landscape character of the land in question to determine whether it plays a tangible role in supporting operations associated with the principal building, for example, accommodating domestic functions associated with a country house. 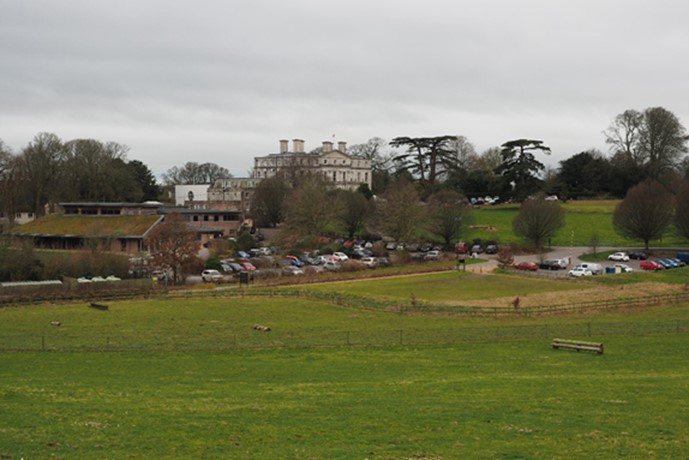 Figure 1: View of Kingston Maurward Estate showing a mixture of historic and modern buildings alongside the country house. This demonstrates that the curtilage of country houses can be large and complicated by historic ownership.

Farmsteads
While concepts of domestic use are helpful in defining curtilage, non-domestic curtilage relationships can be even less clear. A prime example of this is historic farmsteads, particularly when an ancillary building historically owned and associated with a listed property falls into separate use.
This was shown most prominently in the ‘Jews Farm’ ruling (Egerton v Taunton Deane, 2008) where Mr Justice Sullivan judged that the ‘Mill Barn’ and ‘Old Granary’ were not part of the curtilage of the nearby listed Jews farmhouse despite being in the same ownership. In particular, this case differentiated between the residential use of the farmhouse and the agricultural use of the farm buildings (at the time of listing) which, in his view, demonstrated that they were functionally separate, and one could not be considered ancillary to the other. In this case geographic layout was also a key factor as the boundary wall that separated the barn and granary from the farmhouse was considered to clearly define the domestic curtilage of the farmhouse. Mr. Justice Sullivan observed:
“Although the whole of Jews Farm, including the farmhouse and all the agricultural buildings, including Mill Barn, was in common ownership when the farmhouse was listed in 1984, the listed farmhouse and its residential curtilage was both physically separated from, and functionally distinct from, the agricultural land and buildings on the other side of the wall. The fact that they were all constituent parts of the same farming enterprise at Jews Farm does not mean that Mill Barn, or any of the other agricultural buildings beyond the wall, were within the curtilage of the farmhouse.” (Justice Sullivan, Egerton v Taunton Deane, 2008)
From a heritage perspective, this shows the complicated current legal position on curtilage listing in regard to historic farmsteads. In a sense the definition of curtilage as established through Egerton v Taunton Deane, which is very closely pinned to domestic curtilage, appears to be at odds with the intention of curtilage protection referred to in Calderdale, which was to bring protection to structures “which would not naturally or certainly be regarded as part of a building or features of it, which nevertheless are so closely related to it that they enhance it aesthetically and their removal would adversely affected.”
For example, in their recent assessment framework on historic farmsteads Historic England notes that their historic form as farmsteads (their layout and interrelation of buildings) is an important component of their significance (Lake, 2015). In such cases one wonders why protection is focused on listed farmhouses but not on the farm buildings with which they form an ensemble.
This emphasizes the significance of the layout of farmsteads to their historic character. This seems to get lost in assessments for curtilage listing currently which consider curtilage in a domestic context only; this is not easily applied to farmsteads where they are one unit, but with several different uses. The Elms Farm Appeal case in 2014 compounded this as the Inspector concluded, after applying the Calderdale tests, that despite a barn being in the same ownership, physically close and historically associated to a listed farmhouse, it was not curtilage listed as it was in agricultural use while the farmhouse was residential.
Perhaps a more character-based assessment of curtilage listing would be more logical in relation to historic farmsteads and country estates.

When it comes to determining the acceptability of alterations to curtilage structures it is important to remember that curtilage structures are not listed in their own right, but for their contribution to the special interest of the principal building, i.e. that unless works to a curtilage listed building would affect the special interest of the principal listed building then they should not need Listed Building Consent (Mynors, 2006, pp.101-115).
For any queries on curtilage listing, Historic England’s Advice Note 10 is a helpful starting point and Lichfields’ Heritage Team can provide expert advice. Formal clarification can be sought through Historic England’s Enhanced Advisory Service or by speaking to your local Conservation Officer. Since the Enterprise and Regulatory Reform Act was published in 2013, Historic England has had the power to explicitly identify which curtilage structures do not contribute to special interest and are therefore excluded from the listing. This is crucial in cases, for example, where structures may have been previously rejected for listing, but where the question of curtilage status has never been clarified. Similarly, Certificates of Immunity from Listing do not provide immunity from curtilage listing – this can only be provided by updating the listing description for the principal listed building to exclude the curtilage structure.