James Tindale 15 May 2019
It is now almost two years since the UK Government launched the Housing Infrastructure Fund (HIF) in July 2017. This blog provides an overview of the announcements made to date on what funding has been granted to lower and upper tier authorities across England to help unlock thousands of new homes. Lichfields has been involved in preparing a number of HIF bids across the country.
First, let’s look at the Marginal Viability Fund (MVF), the smaller of the two HIF sub-funding pots. The MVF was designed to get housebuilding started quickly on sites where the upfront costs of putting in the infrastructure are not stacking up financially. Bids were capped at £10 million, although a higher level of funding may be awarded in exceptional circumstances if bids demonstrate a “transformational delivery of new homes”[1]. The value of MVF funding available to lower tier authorities (e.g. Districts and Boroughs) is currently set at around £900 million, of which, £866.3 million was provisionally allocated to 133 bids from lower-tier authorities in February 2018. To date, 94 of the 133 bids with a combined value of around £605.9 million have been approved by the Government.

Note: The ratios of provisionally accepted bid funding and approved bid funding per resident have been calculated by using the total value of each funding and dividing it by the population of each region in 2017, sourced from the Office for National Statistics (ONS), Mid-Year Population Estimates (2018).

Unlike the other regions, none of the provisionally accepted bids submitted by authorities in London has yet been approved by the Government. This may change as the Greater London Authority (GLA) has signed a Memorandum of Understanding with the Government to fund the £110.7 million of London projects[2], which signals the intention of approving the funding eventually.

The map below shows MVF awards by local authority to date.

Approved MVF Funding by Local Authority (at May 2019) 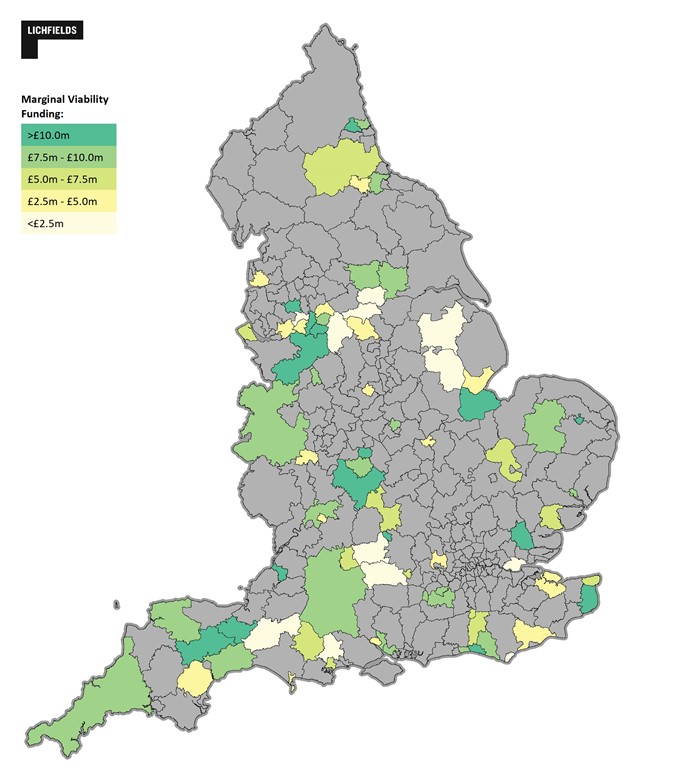 Note: the local authority boundaries do not reflect the changes that came into force during April 2019.

Those areas that have not benefitted from the MVF still stand to potentially gain funding from the Forward Fund (FF), which is substantially larger than the MVF with £4.1 billion of capital available and a maximum bid value of £250 million other than in exceptional circumstances. So far, seven successful FF bids have been confirmed (see the table below), with a combined value of £1.16 billion, or 28% of the total FF pot. Almost half of the £1.16 billion has been awarded to the GLA to improve the capacity of the Docklands Light Railway and to pay for infrastructure to unlock housing in part of the Old Oak and Park Royal Opportunity Area. London could further benefit from the FF if the other large-scale bids the GLA submitted such as for expanding capacity on the East London line and funding infrastructure at Meridian Water are approved.

Successful Forward Funding Projects (at May 2019)

Whilst it may seem that London will be the major beneficiary of the FF, other regions still stand to significantly benefit from it, with projects in Oxfordshire, Cambridgeshire and Peterborough and Cumbria having been awarded over £100 million of funding apiece. Considerable amounts of funding were also announced for Devon and the North Cheshire Garden Village in East Cheshire. Lichfields assisted in the delivering the North Cheshire Garden Village bid by developing the economic case for the scheme and providing post-submission support to East Cheshire Council.

With the final round for bids closing on 22 March, we can expect that the remaining £2.9 billion of FF will be allocated once Government completes its appraisal and final co-development process with upper tier authorities which is in progress. It remains to be seen exactly how the Government will use the additional £500 million of funding added to the HIF in the Chancellor’s 2018 Autumn Budget.[3] Further announcements are due shortly, and it will be interesting to see if and how the geographical allocation of funding changes as new HIF awards are confirmed.