Industrial revolution: where next for Local Industrial Strategy?

Industrial revolution: where next for Local Industrial Strategy?

Lucie Bailey & Ciaran Gunne-Jones 27 Nov 2019
Today marks exactly two years since the government published the UK’s Industrial Strategy. Since then, Local Enterprise Partnerships (LEPs) and Combined Authorities across the country have been busy preparing their local response through the form of Local Industrial Strategies (LIS), intended to showcase how local areas can support the nationwide challenge to boost productivity and economic prosperity.

The journey so far

So far, 6 “trailblazer” LIS have been completed and published, forming part of a first ‘wave’ that focused on the major city regions of Manchester and Greater Birmingham and the Oxford-Cambridge Arc growth area (see Figure 1).
Wave 2 includes a further 6 strategies. One of these has now been published (West of England) with the remainder due to be agreed with government by March 2020.
The third and final wave of LIS captures all remaining areas of England outside of waves 1 and 2. Progress within this group varies quite significantly, and some wave 3 strategies appear to be further ahead than their wave 2 counterparts (such as the draft New Anglia LIS which has been submitted to government for review).
Figure 1: Local Industrial Strategy ‘Waves’ 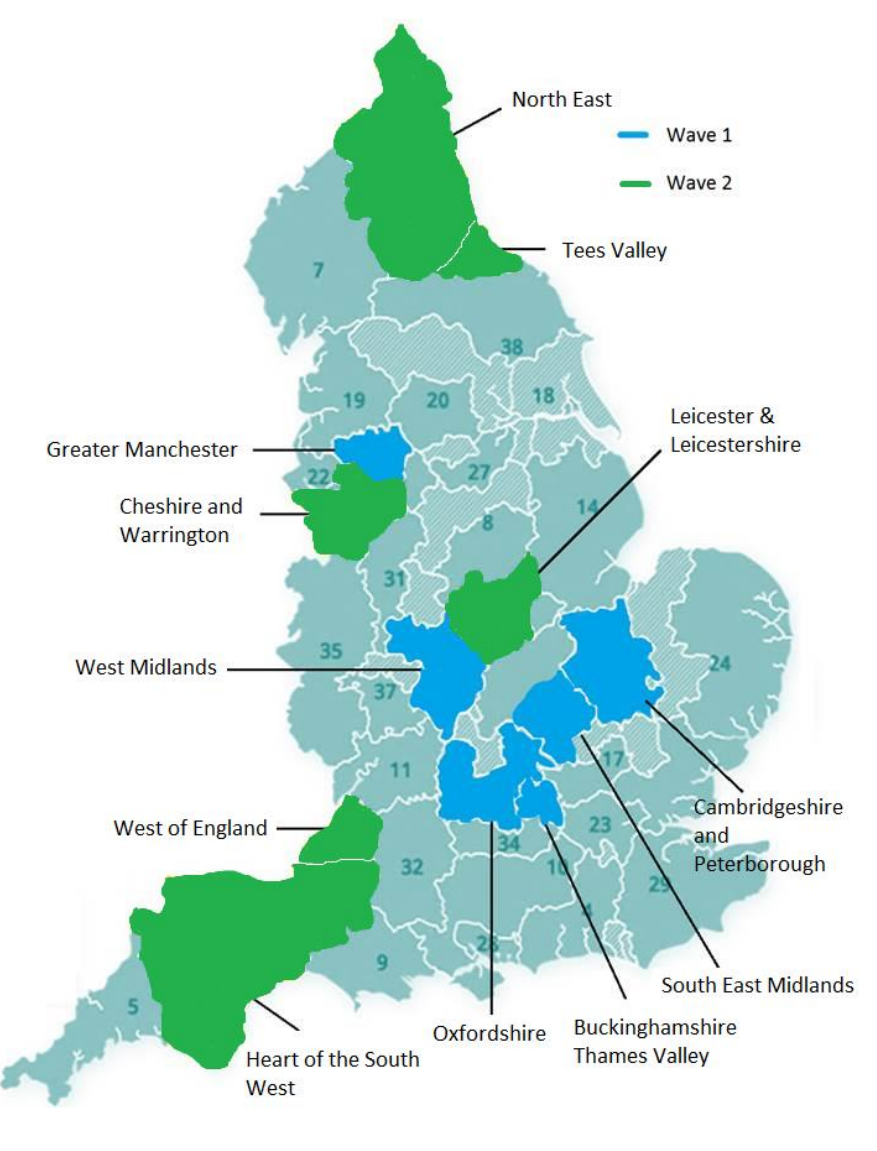 With government originally aiming to have all LIS in place by early next year, the race is on to get the remaining 30 or so agreed with the various government departments and Whitehall teams. And whilst recent political events are likely to have impacted this programme to some degree, the March 2020 target remains the official position.
At Lichfields, we’ve been supporting a number of LEPs and Combined Authorities to get their evidence base in place and to help draft policy propositions and interventions that maximise local strengths, assets and strategic growth opportunities, whilst also working with a range of other local partners across the country to feed into the LIS process to ensure their specific priorities are reflected.

What have we learnt?

A number of overarching observations and learning points stand out, based on what has come forward from LIS development so far:

For the trailblazers, and those other LIS due to be completed soon, attention will be turning to translating ambitions and policy interventions into a coherent programme of delivery, and monitoring progress of objectives against key performance indicators.
The LIS development process has provided a timely opportunity for a wide range of stakeholder groups to engage and input to setting the productivity agenda for their local area, so there will be a great deal of interest in LIS implementation and how local partners can get involved in this. Those that mobilise early on will undoubtedly be best placed to capitalise on and benefit from resourcing and funding opportunities that flow from their LIS, albeit these have not yet been clearly defined.
Some LEPs have already started to progress this final step; OxLEP for instance is currently preparing an Investment Prospectus to detail the LIS investment opportunities, a Delivery Plan for each policy intervention and project set out under the LIS, and a Monitoring & Evaluation Plan to demonstrate the impact and value for money associated with commitments under the LIS and track Oxfordshire’s performance as a global innovation ecosystem against rival competitor locations.
The Lichfields team will be exploring some of these issues and challenges at the Institute of Economic Development (IED) Annual Conference 2019 taking place in London on Wednesday 4th December, where we will be chairing a roundtable discussion on Local Industrial Strategy. We hope to see you there for what promises to be a thought-provoking discussion.

To Airbnb or not to Airbnb... that is the question