Low-Powerhouse: What does the new Standard Method mean for the North West?

Presented as the most radical shake up in planning for decades, the Government’s White Paper “Planning for the Future” was released on Thursday alongside a consultation on changes to the Planning System which aims to continue the simplification of how local Councils determine their housing needs. The current Standard Method for calculating housings need, whilst somewhat elegant in its simplicity, misses the mark in that it generates a national minimum housing need well below the Government’s 300,000 a year target. In particular, the method’s reliance on a set of outdated projections (the 2014-based SNHP), which have now been superseded by 2 separate updates, means that the time is ripe to reappraise the approach using more up-to-date information.
On top of this, to those of us invigorated by the Government’s stated intention to rebalance the economy and ensure the words “Northern Powerhouse” are more than a mis-remembered prog-rock band name, the fact that the current Standard Method concentrates housing need in London and the South so strongly feels counter-productive. The new Standard Method has been proposed in the wake of a number of fresh taglines including “Levelling Up” and “Build, Build, Build”, along with a host of public spending promises which leave no doubt as to the new economic philosophy of Government in the wake of the COVID-19 pandemic. So, does the proposed Standard Method match up with the rhetoric for the North West? 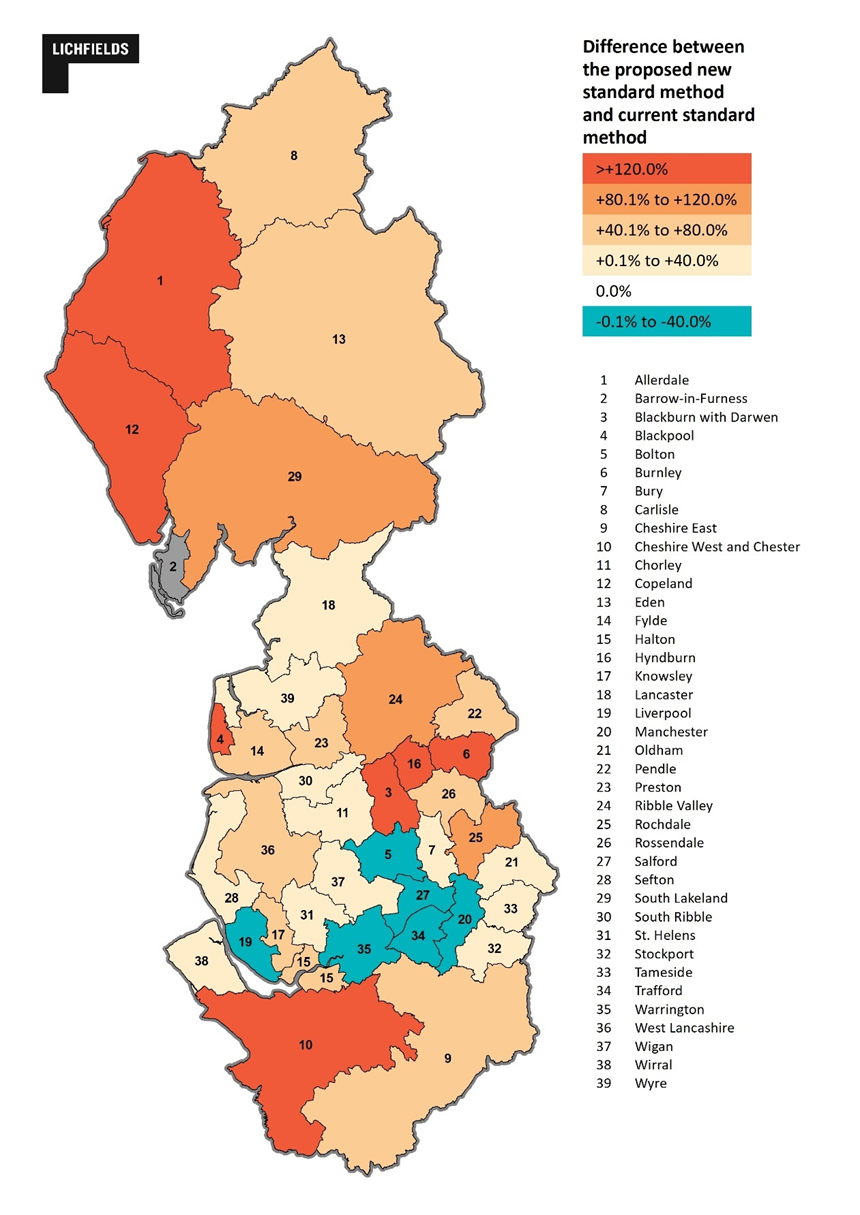 The total North West housing requirement has increased from 20,599 houses to 24,641, an increase of 20% on the previous SM target. Whilst this may sound positive, it is well below the national average change of 35% and sits well below the rate of growth for the Midlands (44% and 40% respectively for the East and West Midlands) and particularly London, which would see a 67% increase. Furthermore, a number of the North West’s urban centres would see significant falls in their requirements under the proposed revised Standard Method.  Manchester (-37%) and Liverpool (-26%) see significant falls compared to the current methodology; as well as falls in Warrington (-17%), Trafford (-10%), Bolton (-9%) and Salford (-1%).  Indeed, Manchester would see the largest absolute reduction of any local authority in the Country with a reduction of 968 dpa from the current SM.
The authority with the largest increase is Barrow-in-Furness with a technically infinite increase on their previous zero figure which rises to 159. Copeland also has a huge +1,263% on their current requirement of 11 which jumps to 154 dpa. Other notable increases are in East Lancashire where Burnley (+260%), Allerdale (+202%), Hyndburn (+194%) - all areas which have been highly affected by the incorporation of the existing housing stock into the calculation and are already somewhat constrained.  There are further large increases in areas such as Cheshire West and Chester (+184%) and Ribble Valley (+108%) where the 2018 Household Projections have increased considerably (by as much as +140% in the case of Cheshire West and Chester, which also has by far the largest absolute increase of any Council in the North West, of +1,076 dpa, followed by Cheshire East at +706 dpa). 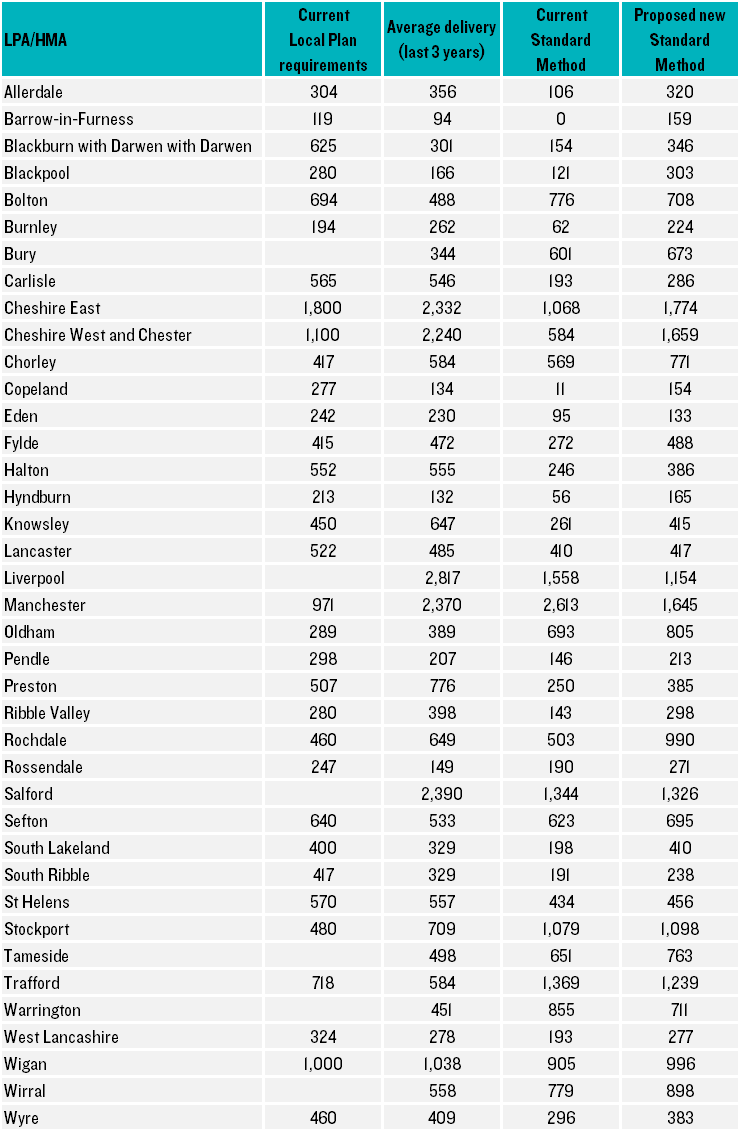 Clearly, the proposed standard method has widespread implications across the North West, with a number of authorities facing the prospect of significant changes in their minimum requirements. This will pose localised issues for authorities preparing Local Plans and others where a review will now be firmly on the cards.
The scale of the changes is particularly evident when looking at the national picture. Under the current method, 53.2% of the national requirement is located in London, the South East and the South West. Under the proposed method this rises to 67.4% (notwithstanding Greater London’s ability to actually deliver over 93,500 dpa, which seems extremely unlikely).  That being said, the national requirement under the proposed method rises from 250,550 to 337,307, an undoubtedly ambitious and positive approach to tackling some of the country’s housing crisis, aligning with the Government’s recent rhetoric on the fundamentals behind securing economic recovery.  Although the proposed standard method results in an increased housing requirement across the North West, it would not appear to align with Government rhetoric of ‘levelling up’ the economy and redistributing and focusing growth in the North.
As for the fate of the Northern Powerhouse agenda, in housing terms at least, the numbers leave little room for interpretation. Whilst the increase in certain areas is welcome, at face value they remain completely at odds with the extensive delivery of housing in the city centres of Manchester, Salford and Liverpool which would all see a significant reduction in their requirements from recent delivery rates.
Overall, the proposals once again indicate the challenge of having a ‘one-size fits all’ standard methodology and highlight a need to sensitivity test the output and consider adjusting the requirements to reflect the regeneration ambitions of these centres. This looks to be the case in Manchester, Salford and Liverpool which need to be at the heart of delivering Northern Powerhouse aspirations in the North West.
For implications of what the New Standard Method means for other regions, see below perspectives:
London   |   Thames Valley   |   South West   |   West Midlands   |   Yorkshire and The Humber