Yesterday was officially #planningreformday and as part of this, my colleague Bethan Haynes almost immediately crunched the numbers for the new Standard Method (‘SM’) across the country. The results of can be viewed here. This blog forms part of a mini-series of more in-depth look at the impact of the new SM on different regions of England; in this case London – which is now (unofficially) England’s hotbed of housing need. It sits under an in-depth national blog prepared by Bethan which looks at the new SM and its calculation.

The table below sets out all the new SM local housing need figures for all the London Boroughs. It also provides a lot more detail in terms of the average delivery in the past three-years, the emerging London Plan (2019) requirement, and the current SM figure.
Overall, London’s housing need figure has jumped from c.56,000 under the current SM to c.93,000 as calculated using the new draft SM: a 67% increase. More importantly, it is c.44,000 homes greater per annum that is set to be required under the emerging London Plan (2019): an increase of 92%.
Some highlights to note: 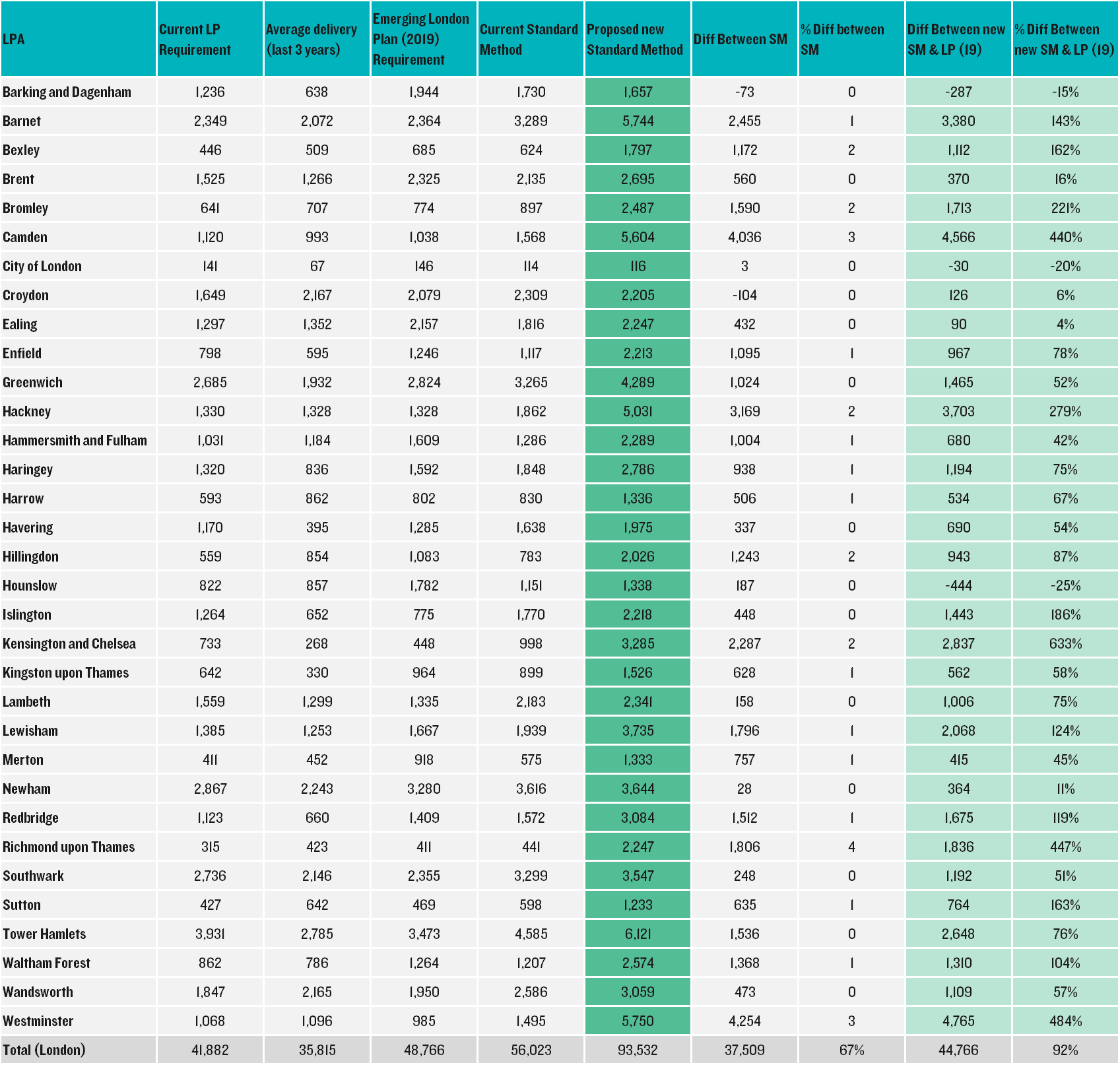 To help unpack the data, the below map shows spatially the difference (as a proportion) between the emerging London Plan (2019) requirement and the proposed new SM for that Borough. The inner London Boroughs north of the river are particularly affected by the changes to the new draft SM seeing the greatest increases. So are (in general) the very outer Borough’s such as Richmond upon Thames, Sutton, Bromley and Bexley. 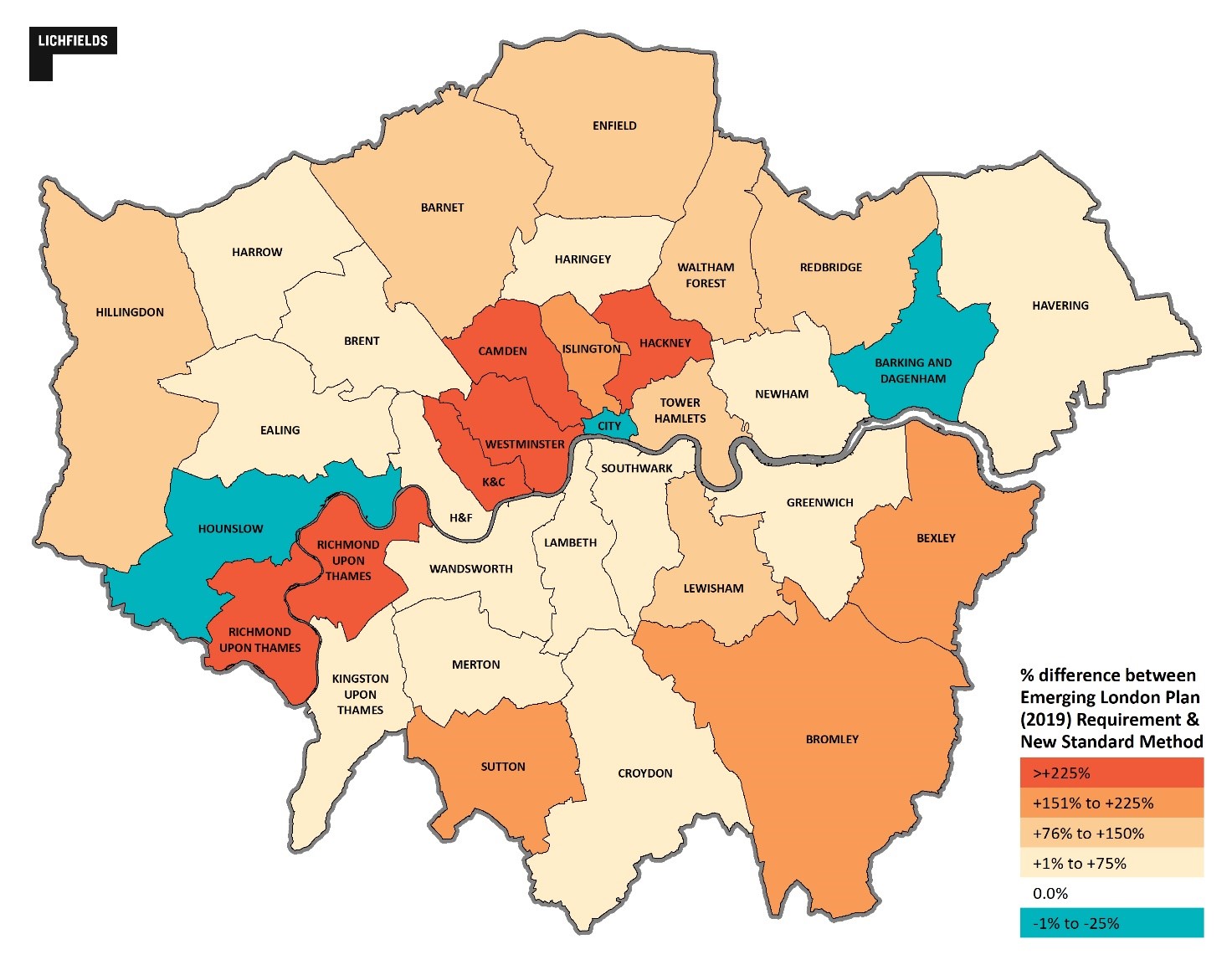 What does the new SM mean for London?

Rt Hon Robert Jenrick himself has made it very clear that he thinks London should be planning for and crucially delivering more homes that the emerging London Plan (2019) currently proposes. The SM would result in a huge jump in housing need across the capital to a minimum of c.93,000 dpa. This is itself well above the 66,000 dpa need figure set out in the emerging London Plan; which Jenrick himself noted as being what “most commentators think is the real need of London”[1]. Indeed, the new SM would confirm London as the hotbed of housing need in England, being 28% of the national need figure. All of the top 10 greatest increases under the new draft SM compared to the current SM are also London Boroughs.
But what practical impact could the new draft SM have on these London Boroughs? Well, potentially very little.
In the short term the new draft SM should have no impact. The new draft SM is under a separate 8-week consultation to the White Paper (12-week consultation) and is described in the White Paper as a ‘short term’ change. Looking back at previous changes to the NPPF (2018), a consultation began at the end of October 2018 and changes were published in mid-February 2019 – c. 4 months. By that reckoning we could be in a situation where potentially this side of Christmas a new SM would be adopted through a revision to Planning Practice Guidance. Now, by that time the adopted London Plan (2016) will not be more than five-years old. So, for the purposes of five-year land supply there shouldn’t be a major jump in the requirement.
In the medium term, there should again be no direct impact either. Assuming the emerging New London Plan (2019) is adopted prior to the adopted London Plan (2016) becoming more than five-years old, Boroughs will be protected for another five-years from that date.
But what about the next London Plan that the Secretary of State has said needs to begin preparation, as a condition for signing of the emerging New London Plan? And what if that next London Plan is prepared under the auspices of the new planning system set out in the White Paper?
There are two questions to consider:
1.   Is the higher number achievable, and if not what happens?
If maintained as the basis for considering housing need, this proposed standard method would add to the level of need with which the London Plan would need to grapple; it would increase the pressure for moving beyond the current capacity-based approach that has driven London Plan-making to date. But whether the number is 66,000 or 93,000 does it make a practical difference?
From a starting point – no. The emerging London Plan (2019) minimum requirements are quite a jump from the adopted London Plan (2016) and are capacity-based figures not need-based. If London only has capacity for c.56,000 homes – on average – per annum to 2029; in reality where will an extra c.44,000 units per annum meant to be built? The increase is it itself more than 7,000 above the current three-year average total delivery in the capital (37,000 units1). Such a jump in need would require more than simply finding some extra sites down the back of the sofa. Any housing need figure in London above 40,000 puts pressure on London’s plan makers to do something different, but that will take time to have practical effect.
Even with some creative regeneration and renewal, there is clearly going to be a lot of unmet needs floating about unless there is some serious cross-boundary strategic thinking beyond London. The White Paper released yesterday does say that such thinking will occur (with the removal of the Duty to Co-operate) – but this is yet to be worked through. This, I would say, brings us back to and only emphasises more the biggest conundrum for planning in the South East of England – If London doesn’t have the capacity to meets its needs, where does the rest go?
2.   Will the current SM be superseded by the time the next London Plan is prepared?
The new SM is in reality only a short-term change for current emerging plans. It is designed to set a need figure that plan makers then set against the various constraints in their area, to set a ‘policy on’ requirement figure.
The White Paper’s Proposal 4 proposes to replace the SM for need with a new Standard Method for requirements which would taking account of need, land capacity, constraints and other ‘policy-on’ factors. This nationally set requirement would be non-negotiable. The Government is seeking to have this new system (and Local Plans – taking no more than 30 months to prepare) in place by the end of this parliament, which means the current SM proposals might have a shelf life of just two years.
So, rather than vexing about the 93,000 dpa need figure, the next London Plan may find itself more focused on how the Government intends to standardise the exercise of carrying out its own balancing exercise of need and demand to set London’s housing target. This will leave is for a future London Plan to distribute it and decide what gives.
For implications of what the New Standard Method means for other regions, see below perspectives:
North West   |   South West   |   Thames Valley   |   West Midlands  |   Yorkshire