Matthew Spry & Bethan Haynes 16 Dec 2020
The launch of the proposed new standard method for local housing need on 6th August 2020 unleashed a media and political storm. An unfortunate cross-over with the problems of A-levels and GCSEs led to it being dubbed the ‘mutant algorithm’[1]
On 16th December, the Government sought to resolve matters, making a series of announcements across four publications:
What are the headlines and what does it mean?

For most local authorities, it’s ‘as you were’

Outside the 20 largest urban areas, the method will remain that which was first introduced in 2017, which is based on applying the 2014-based household projections, with a percentage uplift to reflect the price-income affordability of housing, subject to the 40% cap. Whilst the number will change in response to fluctuations in affordability, the ten year period over which it is calculated, and the plan-related 'cap', this represents stability.
Interestingly, this now means that the majority of those local authorities preparing plans over the next 2-3 years, looking ahead to 2040 or beyond, will be doing so based on a demographic trend period of 2009-2014 that was infected by the financial crisis.

The new method applies what it calls a 'cities and urban centre uplift' of 35% to the capped need figure generated by the existing standard method in the top 20 largest cities and urban centres. What is classified as the top 20 is based on ranking the ONS list of major towns and cities[6] by population, and thus it may change over time. The current top 20 are Birmingham, Bradford, Brighton and Hove, Bristol, Coventry, Derby, Kingston upon Hull, Leeds, Leicester, Liverpool, London, Manchester, Newcastle upon Tyne, Nottingham, Plymouth, Reading, Sheffield, Southampton, Stoke-on-Trent, and Wolverhampton.
The effect of this uplift is summarised in the table below, which compares the new SM approach against past delivery, the most recent Local Plan, and the previous version of the SM without the urban uplift. 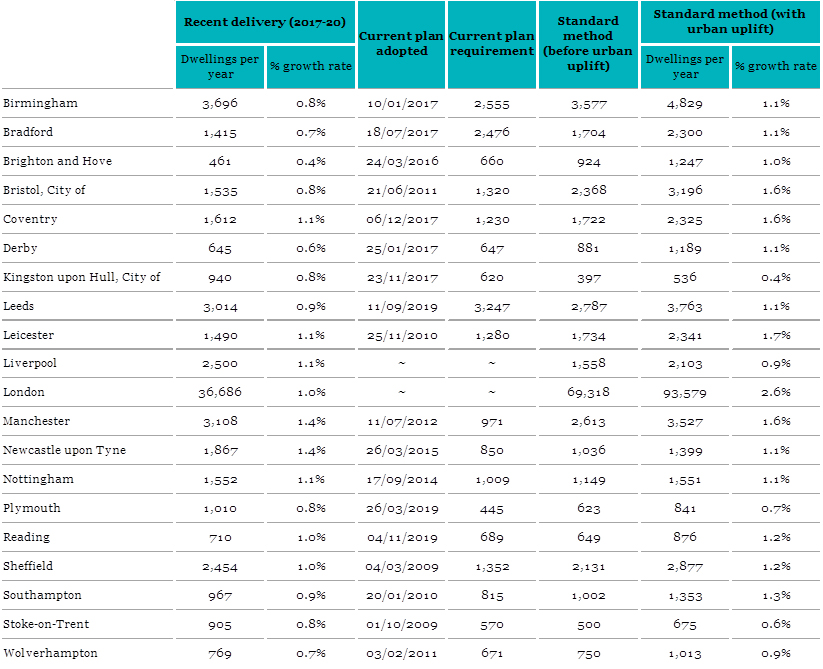 As can be seen, London represents the biggest absolute increase because the 35% is applied to all Boroughs, whereas for other metropolitan areas it only applies to one or two urban authorities. We turn to the London figure later in our analysis.

The City and Urban Centre Uplift: Quart into a pint pot?

Based on the indicative figures supplied by Government, the new national total is just short of 300K, but this figure will change when individual affordability ratios, projection period, and outputs of the plan-based 'cap' all change over time. This compares to an average annual net additions rate since 2017 of 236K.
However, the change in the Standard Method is not evenly spread by region. The figure below charts current local plan requirements, average delivery, the current method (with and without the urban uplift) and the (now deceased) mutant algorithm. 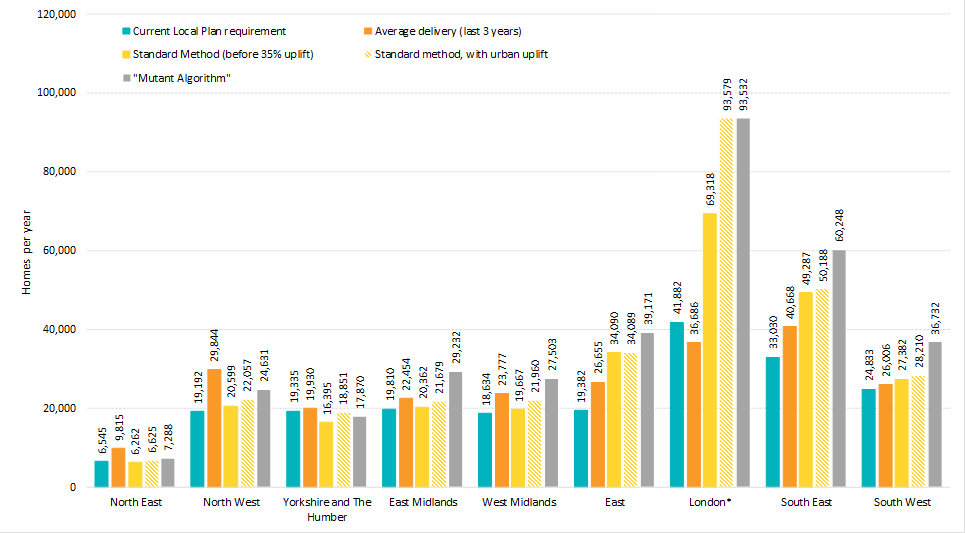 The authorities in the OxCam corridor have delivered an average of just over 22K dwellings per year in the last three years (to 2020); slightly more than the standard method indicated was needed (before any urban uplift) – 21K[9]. But none of the cities in the corridor fall within the 20 largest urban areas to which a 35% uplift is applied – meaning that the number across the arc will remain at just under 21K dpa for the foreseeable future.
This falls below the identified need for between 23,000 and 30,000 homes to support transformation economic growth across the arc, as identified by the National Infrastructure Commission. This ultimately means that Government is reliant upon authorities in the OxCam corridor voluntarily ‘doing more’ than the minimum housing need figure if it wants to fulfil the arc’s economic potential. There is nothing in the PPG to prevent this – indeed, it is encouraged. But it is interesting how the corridor - a longstanding national policy priority - did not similarly feed its way into the revised method as part of the new ('policy-on') uplift.

The Government has reiterated the 2023 deadline for Local Plans

In the WMS, the Secretary of State commented on the timescale for implementation of the wider reforms in the White Paper, saying that the Government:
“will publish a response in the Spring which will setting out our decisions on the proposed way forward, including to prepare for legislation, should we so decide, in the Autumn.”
Whatever the parliamentary passage of that primary legislation, this will be only the first step in a journey that will also involve secondary legislation, policy and guidance to be concluded before any local authority begins its 30 month plan preparation period. There is, quite simply, no realistic prospect of the White Paper providing the framework for practical plan making over the next few years. Despite this, some LPAs have taken the view that they should halt plan making to wait for the new system.
The Government has therefore made plain in its response to the consultation that:
“The government wants to ensure that work continues to progress Local Plans through to adoption as soon as possible and, at a minimum, by the end of 2023 to help ensure that the economy can rebound from COVID-19.”
The December 2023 deadline was the basis of the Secretary of State’s announcement in March 2020[10] which included the following threat:
"The government will prepare to intervene where local authorities fail to meet the deadline in accordance with the existing statutory powers, considering appropriate action on a case by case basis."
The Government will need to monitor closely how quickly the local plan making system – which has stalled due to White Paper, SM and COVID uncertainty – gets back in the saddle and progresses with plan-making. There are a significant number of local authorities where plans will fall beyond the five years-from adoption threshold over the next 2-3 years and need new plans.
Putting all of the above together, one overwhelming conclusion becomes apparent…

Outside London, the new SM adds up to 204,000 dpa. It is only London’s heroic figure of 93.5K that means the new method gets close to 300K, and we know this is a task for the new London Plan that may take five years to put in place, even before it delivers new homes on the ground. There have to be very significant doubts over the prospect of London hitting that figure given past rates of delivery.
There is little evidence that many local authorities are actively seeking to exceed the standard method, despite it being a minimum starting point; in fact, there are examples of areas ratcheting down their ambitions in response to it. We may see some areas continue with higher build rates, but that may diminish as plans are reviewed based on the new method. The Government would need to introduce significant complementary incentives for areas to go above their numbers.
The duty to cooperate has not proved an effective mechanism for the timely resolution of unmet needs in areas of constraints, and we are unlikely to have a sequencing of new local plan production before the December 2023 deadline that ensures all areas are preparing plans at the same time such that needs are met across wider areas. There is so far little evidence that the strategic plan making ambitions being pursued in many areas are proving an effective or responsive way of addressing these matters.
With a fair wind, the proposals in the new SM are a recipe for maintaining (just) current national rates of housing delivery, but seem unlikely to get England over the 300K hurdle.

[1] The consensus is that it’s really only a formula, but ‘algorithm’ is more à la mode.[2] The Ministerial Statement is available here[3] The response to the consultation can be downloaded here[4] The PPG can be accessed here[5] The figures can be downloaded here[6] Office for National Statistics list of Major Towns and Cities[7] Definitions clearly set out in Gallagher Estates and Lioncourt Homes vs Solihull MBC [2014] EWHC 1283 (Admin) https://www.bailii.org/ew/cases/EWHC/Admin/2014/1283.html[8] As set out in her letter[9] MHCLG indicative figures suggest the new SM yields 200 dpa more in the corridor, but this is due to a gremlin for Oxford which did not take account of the recently adopted Plan (impacting on the cap). No cities in the OxCam corridor feature in ‘the list’ of top 20 cities and urban centres.[10] https://www.gov.uk/government/publications/planning-for-the-future/planning-for-the-future