Planning for climate change: Is London leading the way?

Planning for climate change: Is London leading the way?

Nuala Wheatley 03 Jul 2020
Last week was London Climate Action Week 2020, where world-leading experts and policy makers have come together to deliver a series of webinars to drive the national and international climate policy response, prioritising green recovery and focusing on solutions for adaptation and resistance. To coincide with this, Lichfields is publishing a series of blogs that examine various climate change issues.  This first blog looks at how London has responded to the climate change crisis thus far.
Last month, the Committee on Climate Change (‘CCC’) published its 2020 report to Parliament assessing progress in reducing UK emissions over the past year, following its commitment in June 2019 to achieving Net Zero emissions by 2050. The report highlights the importance of securing a green and resilient recovery following the COVID-19 pandemic – seizing the opportunity to turn the current health crisis into a fight against the already accelerating climate change crisis.
The committee reported that a limited number of steps have been taken in the last year, particularly in terms of policy progress, despite growing levels of public concern and activism around this issue by groups such as Extinction Rebellion. Five clear investment priorities are outlined by the CCC, including retrofitting buildings and constructing new housing to the highest efficiency standards; land use measures such as tree planting and building low-carbon infrastructure such as bike lanes.
What is clear is that the Net Zero Target for 2050 is only achievable if it is embedded and integrated across all departments and at all levels of Government. The CCC recommended that all policy and infrastructure decisions will need to be checked against their consistency with the UK’s Net Zero target and as such, national planning documents e.g. the NPPF should be reviewed to ensure consistency against this objective. Thus, a change in national policy approach is the key to ensuring local development plans align with the national consensus.

In London, the impacts of climate change are exacerbated by its dense population and its vulnerability to flooding, overheating and drought conditions. While the City has so far been protected from its worst impacts, much of London’s ageing and energy inefficient housing stock is not prepared for temperatures recorded in the UK in recent years and our infrastructure and communities are already suffering.
The Mayor has set London some of the most ambitious plans to tackle climate change in the world. His recent mayoral campaign pledge centred around delivering a £50m Green New Deal for London, with a target to be carbon-neutral by 2030 – bringing the deadline forward from the legal commitment from the government of reaching the Net Zero Target by 2050.
The New London Plan intends to support the Mayor’s strategies for tackling climate change, particularly relating to the built environment. The plan focuses on building homes to the highest possible standards through a variety of programmes and policies, including:
The Plan predominately places the onus on London Boroughs to develop more detailed policies in line with the principles underlying sustainable design and construction, as well as increasing the requirements on developers of new schemes which can be secured at the planning stage. However, the Mayor has made it clear – particularly within his 2018 London Environment Strategy and in recent comments regarding the Government’s Future Homes Standard Consultation – that without the devolution of more powers from Central Government, London Boroughs will be held back on implementing policies which set higher energy efficiency standards for new homes and as such, the capital will not meet its net zero target.

What are the London Boroughs doing?

Since the Mayor’s December 2018 declaration of a climate change emergency, 29 of the 33 London Boroughs have followed suit and passed their own ‘climate emergency declarations’. A variety of targets in respect of reducing council-generated emissions have been adopted and while the majority have set a target of net zero emissions by 2030 – two decades ahead of the national government goal, some such as Tower Hamlets have set ambitious targets of becoming a carbon neutral Council as early as 2025. 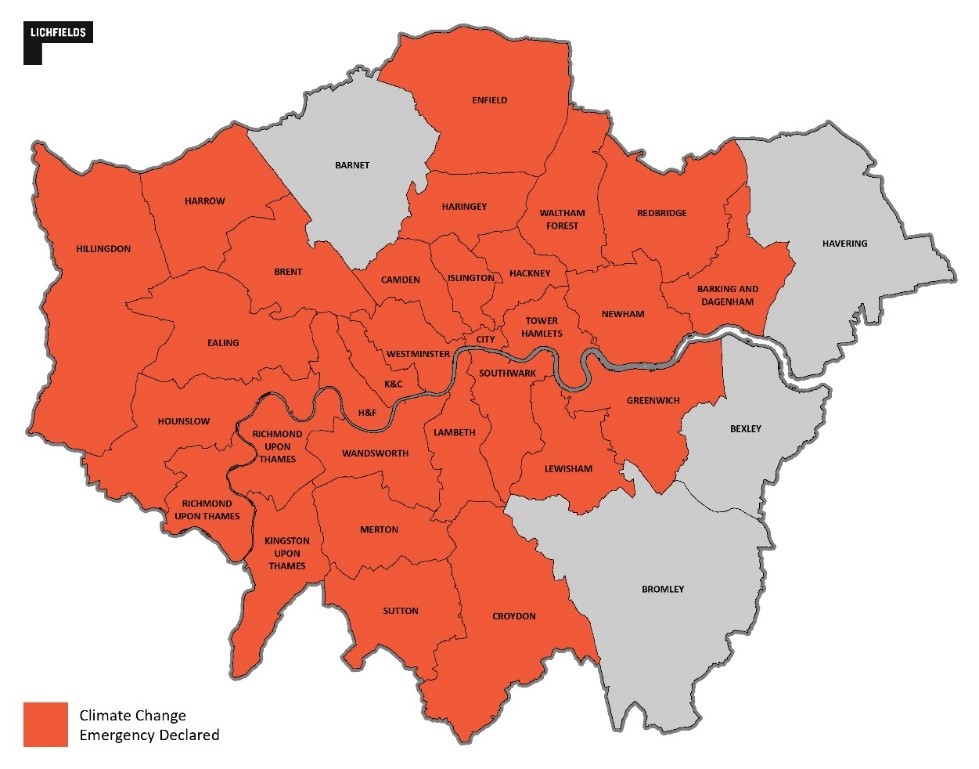 So what are London Boroughs doing so far? Islington Council, in partnership with TfL and engineering firm Ramboll, have developed ‘The Bunhill 2’ Energy Centre which extracts hot air from the Northern Line’s tube tunnels and provides heating and hot water for hundreds of homes and several public buildings in the borough. This ‘first of its kind’ system reduces carbon emissions and air pollution as well as lowering heating bills. Earlier this year, Tower Hamlets Council became the first London borough to rubber stamp a road made partly from old recycled tyres that would once have been destined for a landfill site.
Other boroughs have focused on the aspirations and recommendations of their residents on how to tackle the crisis. Last year, Camden Council hosted the UK’s first Citizens Assembly on the climate crisis, allowing residents to consider evidence and develop proposals for practical action including making all new buildings zero carbon and installing solar panels on as many homes as possible. Camden introduced their ‘Solar Together’ group-buying scheme which enables Londoners to install solar panels on their homes at an affordable price – supported by the Camden Climate Fund.
Although these examples demonstrate proactive steps taken by some London Boroughs, the majority are still only in the early stages of developing climate action plans and establishing their way forward. Recognising the severity of the climate crisis and committing themselves to reducing the causes is the first step, but it is important that these aspirations, whilst timely and valiant, are translated into effective policy and on the ground change.
Whilst the London Plan sets out net-zero carbon home standards and how, through planning control, LPAs can potentially require developers to demonstrate how their proposals reflect carbon neutral objectives, few LPAs can show that their planning policies are designed to secure their area’s contribution to the full decarbonisation of the UK. This can lead to a situation where officers have no clear guidance as to whether proposals are consistent with the borough’s net-zero carbon plans and this can leave a substantial gap between planned policies set out at national or regional level and action at the local level.
Climate change mitigation is therefore a vital component of wider planning and infrastructure policy that should not hinder the delivery of climate objectives at the local level. The CCC recommends that the Government should incentivise, support and enable local authorities to deliver emissions reductions and climate adaptation measures at a local level as ultimately, without adequate local planning systems and policies, it will be more difficult to progress zero carbon in practice.