Adam Jackson & Christopher Darley 16 Jun 2020
The Aireborough Neighbourhood Development Forum has successfully challenged Leeds City Council’s Site Allocations Plan (“SAP”) in the High Court under s.113 of the Planning and Compulsory Purchase Act 2004[1]. All allocations for residential development in the SAP on what were formally Green Belt locations have now been found to been legally flawed under the ruling. This blog provides a summary of the challenge and discusses some of the potential implications of this significant ruling.

The Leeds SAP was adopted on 10th July 2019 following six years of preparation and consultation. It was initially prepared in the context of the Core Strategy adopted in 2014, however the preparation and examination of the SAP was complicated by a selective review of the Core Strategy, including a revision of the housing requirement. This review (which has subsequently been adopted) includes for a lower annual housing requirement than that in the original Core Strategy.
The examination of the SAP was delayed in 2017 so that substantial revisions could be made, including the deletion of some Green Belt sites through a reduction in the plan period of the SAP from 2028 to 2023 (at which point it was anticipated that a review of the Plan would be undertaken to bring it into line with the housing requirement within the Core Strategy Selective Review). However, 37 Green Belt releases were retained within the SAP to meet identified needs through to 2023 and to also maintain a five-year supply of deliverable housing land. Four of the retained sites were within the Aireborough part of the City. A full list of these sites across all parts of the City are listed at the end of this blog.
In August 2019, the Aireborough Neighbourhood Development Forum (“the Forum”) submitted a claim for a Judicial Review of the SAP. The hearing of the Forum’s statutory challenge took place in February 2020.

The Forum challenged the plan on seven grounds and were successful on three: failure to provide adequate reasons as to the lack of need for Green Belt releases; failure to give adequate reasons for the use of the HMCAs in the site selection process; and a failure to take into account the actual surplus in delivery to 2023 and therefore the lack of justification for GB release (see Table 1).
Table one: Successful Grounds of Challenge 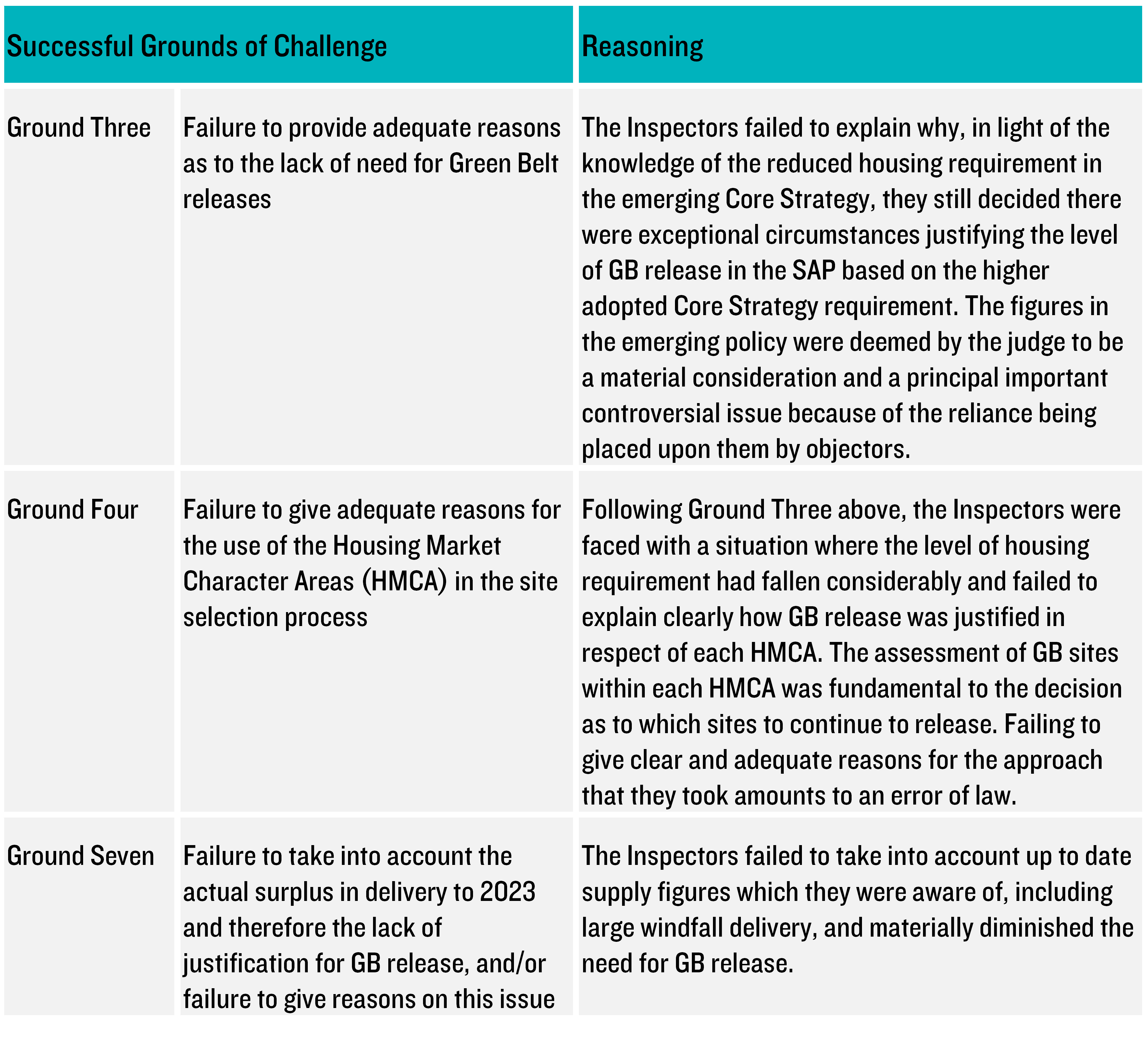 Mrs Justice Lieven also found that there had been a breach of the Strategic Environmental Assessment Directive and Regulations requiring the consideration of "reasonable alternatives" to the strategy of continuing with the SAP in materially changed circumstances. However, she declined to grant any relief in respect of this ground as it was an error that would not have made any difference to the outcome.

At the time of handing down her judgement (and at the time of writing this blog) Mrs Justice Lieven has not indicated what remedy should be applied to rectify the errors in law that have been identified and we understand that the Court has invited further submissions from the parties.
A potential outcome could be that all Green Belt allocations in the SAP are quashed and instead remain as part of the Green Belt. Were this potential outcome to transpire, not only would it have obvious implications for those sites (indeed, we are aware that there are live applications on some), it could have significant implications for the current level of housing supply in Leeds and would also result in a dramatic shift in the mix and distribution of future housing delivery.  We therefore go on to consider the potential implications of such a remedy on housing supply and future plan making.

The issue of 5 year housing land supply has been a longstanding controversial issue for Leeds, with many appeal decisions in recent years confirming an absence of such supply. This issue had, however, seemed to be settled with the adoption of the SAP and the subsequent confirmation of a 7.2 year supply[2]. This supply is, however, dependent on a considerable contribution from the Green Belt allocations.  Indeed, the SAP identifies that this source of supply is expected to deliver 3,778 new homes by 2023[3].  When considered against an annual housing requirement of 3,247 homes per annum[4] this amounts to well over a years’ supply.  Whilst in the context of a claimed 7.2 year supply this may not tip the balance in Leeds being unable once again to demonstrate a 5 year supply, it nonetheless makes the situation more marginal, and the situation could become increasingly perilous if over the next year or so sites identified in the supply do not deliver (or deliver at the rate anticipated). This would also be compounded by the limited scope for replenishment from allocations from later in the plan period.

In the absence of the former Green Belt allocations, the identified supply would undoubtedly become more reliant on the urban sites largely in the City Centre and the separately defined ‘inner’ housing market areas of the City. It would result in such locations contributing over 40% of the housing supply across the City during the period of the SAP.
Whilst no-one could credibly question the vital role such sites play in maximising the re-use of previously developed land and in revitalising the City Centre and beyond, the majority of such sites and developments are apartment-led, or only suited to smaller higher density units. As such the removal of the former Green Belt supply, which by its very nature is located in the outer parts of the City, compromises the ability to deliver larger and family-type housing which makes up a key component of the City’s needs, as defined by the Council’s Strategic Housing Market Assessment.

The clear longer term remedy to the issues arising from this judgement lies with a review of the SAP. In order to be found sound at examination, Policy HRG1 was introduced into the adopted SAP which requires a review to have been submitted for examination by no later than the end of 2021.  We would suggest that, in light of the potential issues that we have identified, this now becomes even more pressing.  Indeed, on the basis of providing a supply of housing over an extended plan period (as opposed to 2028 in the adopted SAP), it is clear that the review will need to look again at the issue of Green Belt and revisit whether exceptional circumstances exist to amend its boundaries.  In doing so it will be interesting to see how the approach to individual housing market characteristic areas is dealt with in the context of the views reached by Mrs Justice Lieven.
In conclusion, whilst we thought that the adoption of the SAP would bring an end to a long period of uncertainty on planning for housing in Leeds, it looks like this judgement and the potential implications that result from it will continue to keep life interesting for a while yet!
Table two: Former Green Belt land allocated for housing in Leeds SAP