Ian York 17 Jun 2020
Lichfields has extensive experience in the leisure and sports industry. To coincide with the return of Premier League football, over the next few weeks we plan to publish a ‘hattrick’ of football blogs ‘commentating’ (too many puns already?) on (i) how Clubs are increasingly looking at different ways to diversify the use of their stadia, (ii) the factors that influence their stadia development strategies, and (iii) the often overlooked subject of Clubs’ wider role in the community. This blog ‘tackles’ (sorry!) the first subject.
Stadia sit at the heart of a football club’s entertainment offer. They are valuable assets on Club’s balance sheets and making the most of (or ‘sweating’) this asset is key to achieving financial sustainability long-term, and justifying the significant financial outlay to build or upgrade stadiums. This also contributes to their role and function in the heart of the community.
The new stadium debate - especially for football - is therefore increasingly becoming more about investment returns rather than purely increasing seating capacity.

Clearly sport is big business with a global reach but also with a very local influence. The increasing commercialisation of sport, in particular for football, has meant that fans want more than simply to ‘spectate’, they want a fuller interactive social experience. Digital in-stadia platforms, fan zones providing a vibrant and unifying space for home supporters, and a high quality variety of food and drink offerings are just some of the stadium facilities increasingly expected by the ‘new generation’ of fans.

The evolution of stadiums is not just about football match days. It’s also about developing the concept of wider stadia use and looking beyond football for new revenue streams, to identify ways to encourage regular footfall, rather than relying on home football games alone.
This can involve developing mixed sporting and events venues and a non-match day offer capable of attracting visitors 7 days a week throughout the year. The rapid evolution of hospitality and concourse design is blurring the lines about the function of the space, as it becomes more adaptable, opening up more opportunities to develop a non-match offer. The ‘pie and a pint’ football fan mainstay is becoming a thing of the past, replaced with up to the minute bespoke bars and ‘street-style’ food units.
The new Tottenham Hotspur FC stadium has been described as the ‘holy grail’ of sports stadium design that ‘kicks’ through convention to create a truly multi-use venue. The architect (Populous) explains that their brief was to design a stadium for the needs of all participants – players, spectators, media and operations – from English Premier League Football, to American Football with National Football League (NFL) specifications plus other codes such as rugby, and other events including major international concerts throughout the year.
Figure 1: The New Tottenham Hotspur Football Stadium 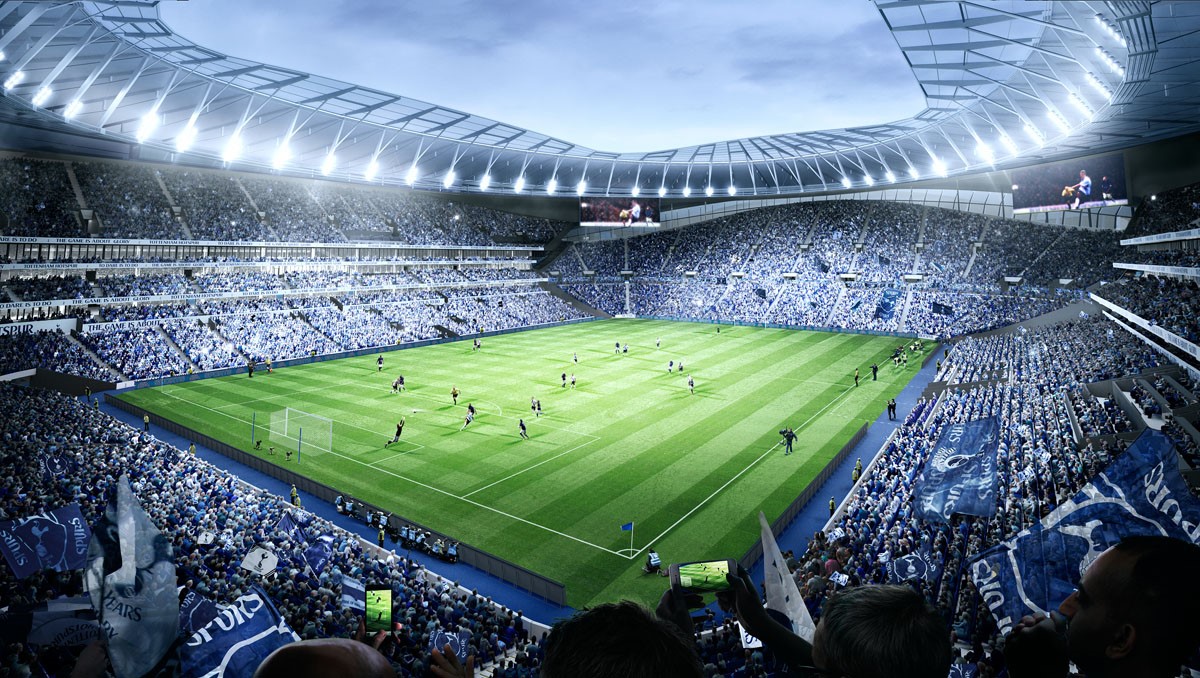 The stadium is considered the benchmark for true multi-sport/event functionality, made possible by the artificial playing surface that lies 1.5m permanently beneath the natural grass football pitch. The football pitch slides away revealing the playing surface beneath and its additional depth allows the front row of seats to stay in exactly the same position, up close to the action – at pitch-level for football and 6 feet above the game for NFL, meaning that every fan has good sightlines over the entourage of players and coaches on the sidelines.
Fulham FC’s (FFC) new Riverside Stand, currently being constructed at Craven Cottage, sets the benchmark for mixed-use stadia design. Lichfields has led the planning and EIA process on behalf of FFC working alongside the architect (Populous, again). Whilst professional football is at the heart of this project, with the highest quality seating and associated match day facilities designed into the stand, it is also about creating a contemporary waterfront destination and a natural social gathering place for the community, attracting visitors every day, all year round.
Figure 2: The New FFC Riverside Stand The two-tier stand makes a great contribution to the Thames. It will accommodate approximately 8,650 seats (an increase of 3,900) and integrate facilities in the space behind the seating tier plus a basement, providing around 15,000 sqm of floorspace along with balconies, decked areas, boardwalks and roof gardens.
At ground floor level, the concourse on matchdays will provide a general admission area for football supporters and include a café and bar areas. On non-match days it will transform into a premium food hall with a variety of food and beverage options for visitors. In the same way for fans on match days, visitors can spill out onto the new riverside walkway that is to be created, which will also be open to the general public to use, creating a vibrant public realm. The riverside walkway will connect the Thames Path in this location, a significant public benefit of the scheme. Restaurants at first floor level; premium general admission for football fans at the second floor concourse which will also host events and functions (weddings, conferences, local group meetings etc.) on non match days; events, bar and lounge space at third, fourth and fifth floor levels; along with a health club and serviced apartments at multiple levels complete the dynamic mix of uses.
Figure 3: Riverside Stand New Riverside Walkway (On a Non-Matchday) Lichfields has also provided planning advice on Ashton Gate Stadium – home to Bristol City FC and Bristol Bears. The stadium has undergone significant redevelopment in past years to increase the seating capacity to 27,000 seats and to improve the range and quality of facilities, including a state-of-the-art conference centre for corporate and private hire, exhibition space and meeting rooms for hire. The stadium also hosts concerts and other events. Plans for a new ‘Sporting Quarter’ to include a sports and convention centre as well as a hotel and residential flats are currently being prepared.

Extending the functionality and uses of stadia is an efficient use of (often brownfield) land and can stimulate wider regeneration within an area. However, it can also be perceived as placing additional ‘strain’ on the local area, with amenity and other environmental considerations needing to be addressed to mitigate potential impacts. Councils’ consideration of stadium proposals can often be finely balanced and developing a scheme that: (i) respects the surrounding environment, (ii) promotes the wider social and economic benefits of the project, and (iii) engages key stakeholders early on and throughout the planning process will help to create a positive basis which decision makers can use to support schemes.
In the case of FFC’s new Riverside Stand, for example, the site’s location adjacent to the River Thames, public parks and residential properties, along with being adjacent to a main listed stand and within a conservation area, presented challenges to upgrading and expansion.
Lichfields advised the Club on the strategy for managing significant interests from residents and local Councillors; rowing and sailing clubs affected by building out into the river – a highly unusual proposition – to provide the new riverside walkway and a larger stand; park users, the Environment Agency, the Port of London Authority and others.
The socio-economic benefits case for the new Riverside Stand was key to securing planning permission. Whilst this information needs to be given significant weight in planning decisions for new stadia development, making the case clearly and concisely is critical. Highlighting the community benefits of local investment, employment opportunities, improvements to local community facilities, continued support of local charities and other initiatives run by, or affiliated with, football clubs etc. – helps people to understand the sometimes overlooked wide-ranging and lasting benefits that football clubs bring to their areas and how supporting new development can help secure these benefits for the longer term. It is these messages – i.e. what’s in it for us? – that local Councillors and residents want to understand and, weighed against the environmental impacts, will ultimately influence their decision as to whether, overall, the development is a good thing or not.
Figure 4: Lichfields’ Infographic: Economic and Social Impacts of Fulham FC Pre and Post New Riverside Stand With the growing number of football clubs needing to explore how to develop more revenue streams linked to stadium operations on match days and non match days, as well as optimise their important role in the community, establishing at the outset of projects bespoke, effective planning and consultation strategies and clearly explaining all the benefits will be fundamental to smoothing the planning process and enhancing the chances of a successful outcome.