Stephanie Irvine 02 Mar 2020
On 27 February 2020 the Welsh Government published its 2018-based subnational household projections, which replace the previous 2014-based projections (published in March 2017). The new projections indicate that there will be c.38,000 additional households living in Wales in 2028 compared to 2018, an increase of 2.8%. While the projections cover a 25-year period from 2018 to 2043, the Welsh Government’s focus in its announcement of the new figures (and my focus in this blog) is on the initial 10-year period, given that the results are increasingly uncertain in the longer term.

The new household projections show a drastically reduced level of growth across Wales when compared to the 2014-based data set – 42.9% lower for the 2018 to 2028 period. The projections have been constrained to align with the ONS national 2018-based population projections for Wales, which show stagnation in the population during this period (+0.6% growth) and a decline in the longer term. The working age population (aged 16 to 64) across Wales is anticipated to decline by 1.7% from 2018 to 2028, whilst the number of residents aged 65+ is expected to increase by 13.8%. At the local authority level, the size of the total population is expected to reduce in a total of 11 local authorities, with the working age population projected to decrease in 17 local authority areas.
This projected stagnation of population growth and decline in workers is alarming. It is critical that this model does not constitute the basis for forward planning in Wales, which should seek the achievement of sustainable development through promoting social, economic and environmental well-being. An important element of this pillar of planning is to deliver economic growth and tackle the challenges associated with an ageing population, including spiralling dependency ratios – issues readily acknowledged by the Welsh Government.
Furthermore, one of the key themes of the Welsh Government’s national strategy, “Prosperity for All”, (December 2017) is to drive an economy which spreads opportunity and delivers prosperity, to include providing secure employment and creating the right environment for businesses to grow and thrive. The achievement of this aim will require supporting the retention of a suitably sized workforce through the provision of sufficient housing – which is clearly not reflected in the household projection figures.

Use of the projections

As required by Planning Policy Wales (PPW) (edition 10, December 2018), the new projections will form a “fundamental part” of the evidence base for Local Development Plans (LDPs), including in particular the setting of housing requirements. However, the negative direction of travel indicated by the new projections highlights the importance of the PPW requirement that plan-makers should consider the projections together with other key evidence, including the links between homes and jobs, the need for affordable housing, and the deliverability of the plan.
The projections will also inform an updated set of national and regional “estimates of housing need” (date TBC) to replace those published in January and July 2019 (see my blog: Welsh Government Housing Need Estimates by Tenure). These estimates are referenced in the draft National Development Framework (NDF) (August 2019) and will inform future Strategic Development Plans (SDPs).

A total of 15 of the 22 local authorities (excluding National Parks) are expected to experience growth in the number of households between 2018 and 2028, ranging from +0.3% in Merthyr Tydfil to +6.9% in Newport. A total of 7 local authorities are projected to experience decline, ranging from -0.4% in Denbighshire to -4.8% in Ceredigion.
Figure 1 Welsh Government 2018-based subnational household projections: Scale of growth (2018-2028) 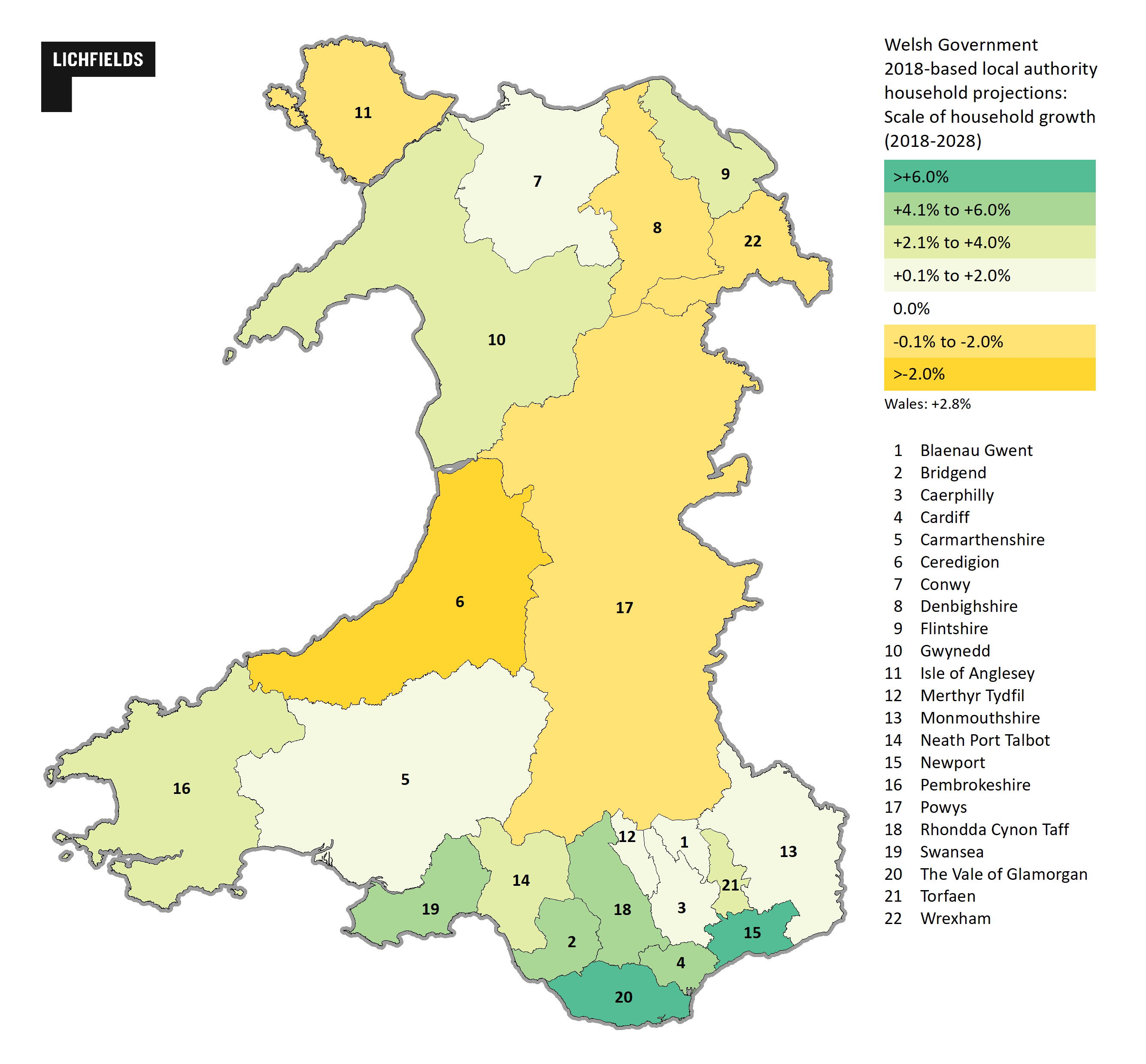 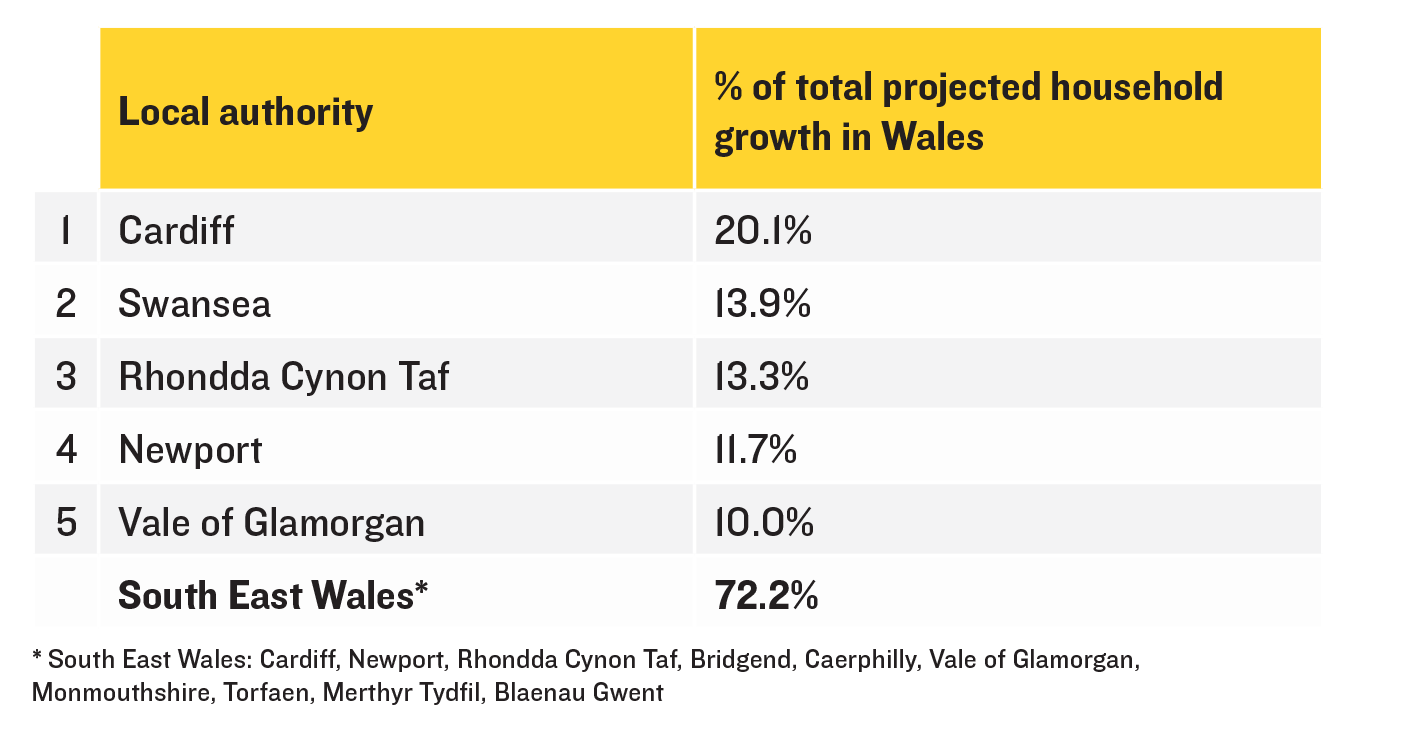 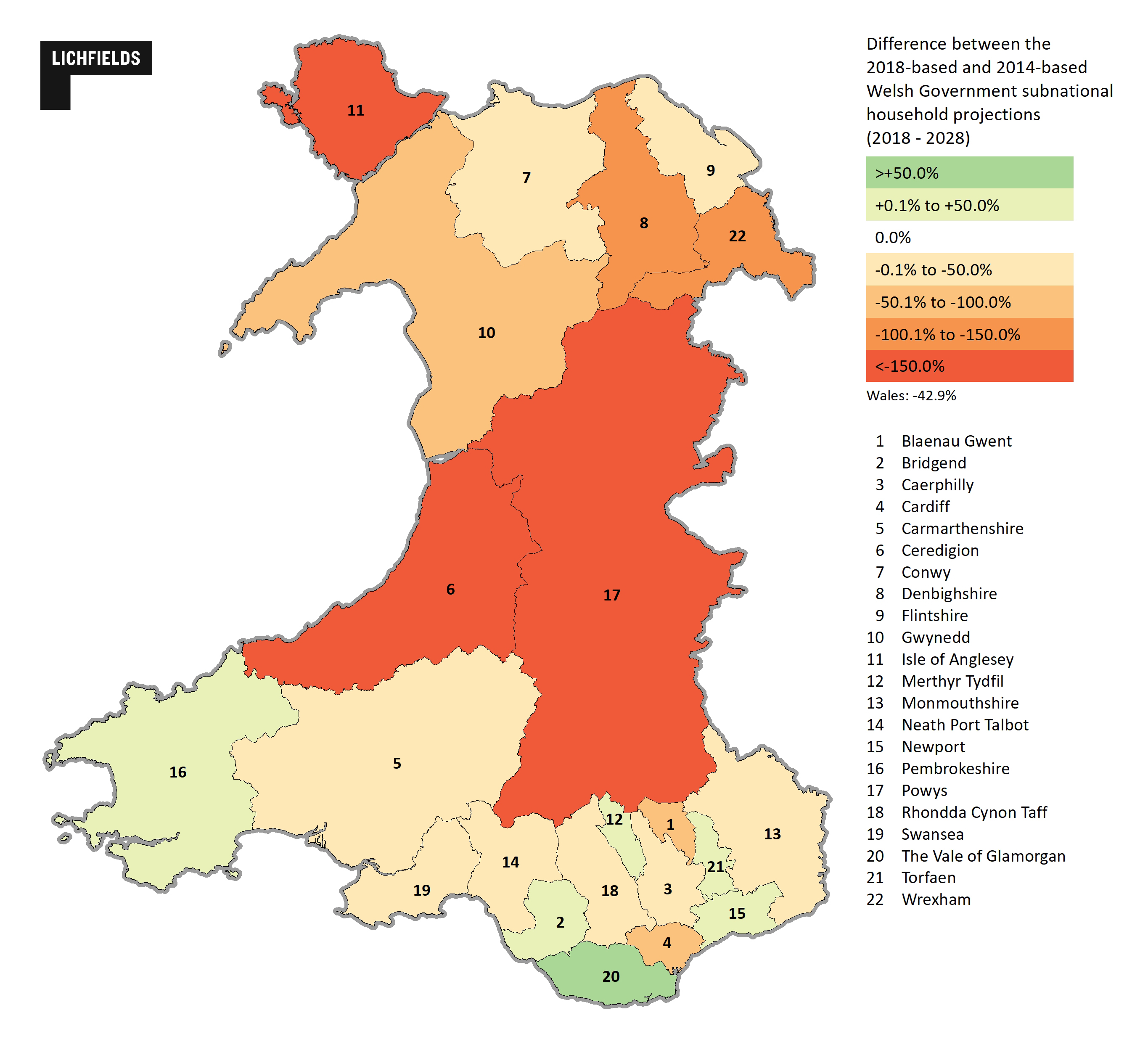 Source: Welsh Government 2018-based and 2014-based subnational household projections / Lichfields

Why such a significant reduction?

So why are the 2018-based household projections so much lower than the previous set? The Welsh Government has not yet published its full quality and methodology information on the new projections (expected in March 2020). However, the key reasons for the differences in this data relate to their basis in the associated 2018-based population projections.
The Welsh Government introduced several changes to its methodology in producing the 2018-based subnational population projections, including constraining the total local authority population figures to match the national total published by the ONS. Interestingly, the Chief Statistician’s blog of 20 February 2020 notes that, had the Welsh Government not applied this constraint, the combined local authority figures would have continued to show “strong growth” over the projection period. There were some reasonable assumptions behind this methodology change but the difference it has made does highlight the need to take a critical view of the results.
What is clear is that the projections do not reflect national and local committed strategies for economic growth and regeneration and fall far short of actual housing need in Wales. They simply carry forward past trends in natural change and migration, which would result in a rapidly ageing population and ever-increasing dependency ratios – outcomes which should not be acceptable in 21st century Wales.

Unless substantial productivity improvements are delivered, the inevitable result of a reduction in the total workforce of Wales would be a shrinking economy. This would in turn make it more difficult to meet the increased social care costs associated with an ageing population.
It is therefore vital that these projections are applied only as a starting point and that planning policies at all levels move quickly away from carrying forward these patterns of past underperformance. Instead, plan-making must support policies promoting prosperity and well-being through alignment with positive economic and social outcomes, such as those within the Cardiff City Deal. In particular, there is a need to attract and retain younger people and workers in order to boost the economy, provide skilled jobs and improve productivity.
Hence, rather than a basis for future plan-making, these latest projections should stand as a warning about how Wales might look in 10 to 25 years’ time if we fail to deliver the positive social and economic outcomes desperately needed.