Setting the standard: Towards a new method for housing need

Setting the standard: Towards a new method for housing need

Simon Coop 21 May 2020
A decade has passed since the abolition of Regional Strategies and the introduction of a requirement for local authorities to “objectively assess” their own housing need (so-called OAN). Over that time, few issues have been so significant for local planning authorities and the development industry.
The NPPF objective of “significantly boosting” the supply of homes is longstanding. The ambition to deliver 300,000 dwellings per annum (dpa) by the mid-2020s is established at a national level. Despite recent increases in supply, a 25% increase on the completions achieved in 2018/19 is still required. The loss of several months’ development activity and an economic crisis due to COVID-19 only increases the challenge.
The 2018 NPPF introduced the standard method (SM) for assessing Local Housing Need (LHN), driven by a desire for a more transparent, simpler and swifter approach than OAN. However, the release of subsequent demographic projections (2016 and 2018-based) with a different ONS methodology immediately undermined it, leading to an interim ‘quick fix’ falling back on the 2014-based projections, with a review of the LHN approach promised this summer.
Current events mean timescales are up in the air, but a new method is coming. And so it should. The 2014-based projections are long in the tooth, and LHN sums to 271,000dpa. Whilst higher than current delivery, it remains 10% below the 300,000 ambition. Further, its lower outputs in the north have resulted in well-ventilated concerns that it cuts across the ‘levelling-up agenda’. It has also concentrated too much need in London where lack of available land, Green Belt, and absence of strategic planning across the M25 mean it will not be met.
There is little appetite to return to the former OAN approach and we assume that reverting to old-style regional planning (or abandoning housing targets) is not on the Government agenda.
This blog provides some thoughts on the broad approaches that might inform a new method that would work with the grain of the current NPPF and local plan system, be consistent with 300,000 dpa and respond to the Government’s other criteria:

Demographic projections have provided the basis for LHN for decades, so sticking with them would represent continuity. Presumably any such approach would retain an adjustment to reflect affordability, but the method could perhaps be amended with greater emphasis on other considerations such as economic growth.
The difficulty stems from the projections themselves. We await the SNHP, but the 2018-based SNPP reveal a significant reduction in population growth nationally (10.3% over 25 years, compared to 16.5% in 2014-based SNPP). It also indicates less growth in London, South East and East which are areas with, still, the greatest problems of affordability.
Figure 1: Comparison of population growth projected by 2014 and 2018-based SNPP 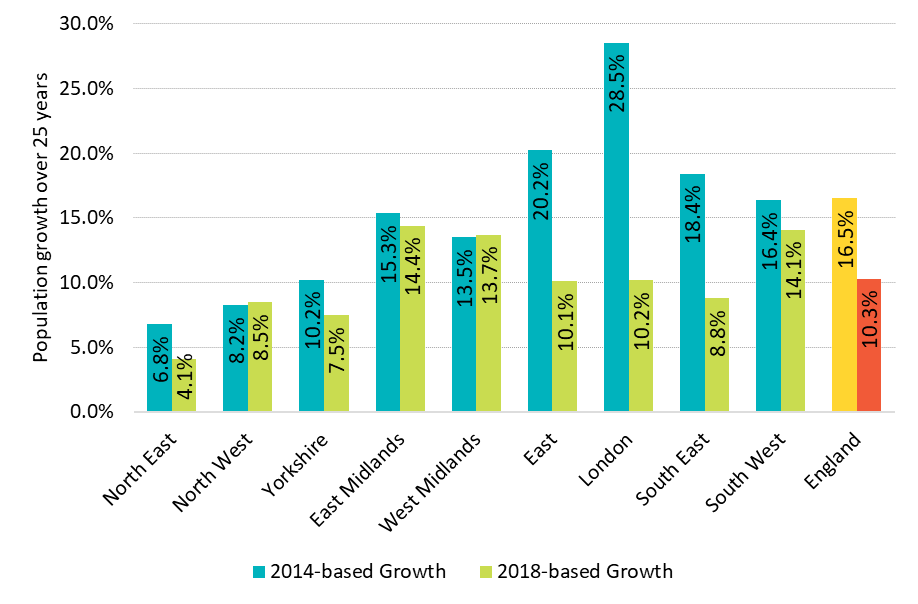 Although the current method applies a market signals uplift, if applied to a low household growth figure, the result will do little to improve access to affordable housing and have negligible impact on affordability (because house prices are set by whole housing market not just new households). Applying the latest 2018-based projections to the current SM would reduce the national need figure to c.209,000dpa – less than is currently being provided and undershooting 300,000 by a third.
Relying on volatile projections also fails the test of stability. Perhaps ONS could formulate them in a different way, but this seems unlikely in the timescales.
We may have reached the end of the road for the use of projections as the starting point for assessing LHN.
Figure 2: Comparison of housing need based on LHN methodology (with 2018-based SNPP), recent delivery and current LHN 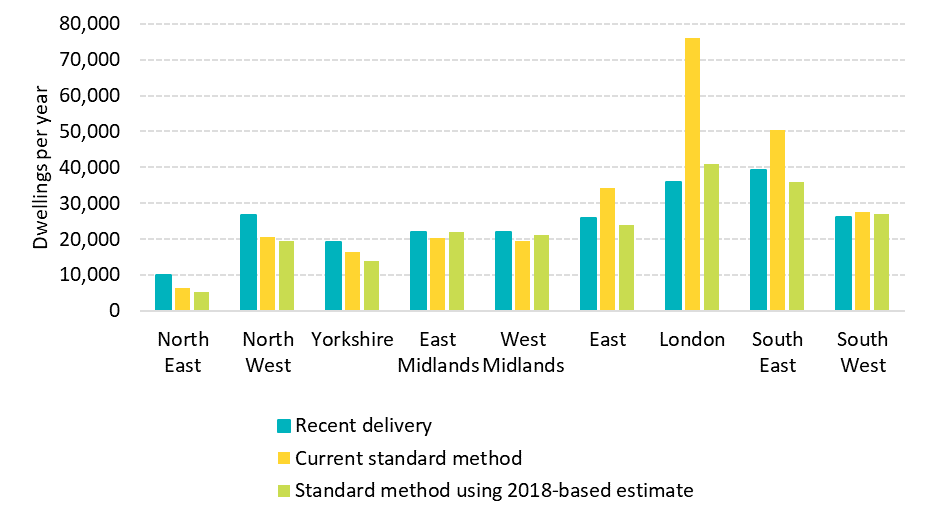 One alternative is a stock-based approach where the LHN for each LPA will be proportionate to the number of existing dwellings (a “fair share” approach). This would help to achieve both the levelling-up and urban focus sought by Planning for the Future and hinted at by the Secretary of State .
When there is constrained land availability or tight administrative boundaries, an urban focus will require better duty to cooperate mechanisms for distributing unmet housing needs across the hinterland,
300,000dpa equates to 1.24% of the national dwelling stock. At its most simplistic, applying this percentage to each LPA results in a need figure that would be the same/higher than the current LHN for 69% of authorities.
Rather than simply apply a percentage uplift, it may be appropriate also to take account of the relative affordability of districts. For example, a 1% stock growth starting point and an upward or downward adjustment using the current SM approach. We calculate that this would result in a total of around 325,000dpa – 10% above the Government’s target and sufficient to provide flexibility to reflect some areas not being able to meet needs.
As time goes on, the Government could calibrate the formula to its housing delivery ambitions by adjusting the stock percentage and affordability formula.

A “top-down” approach could seek to disaggregate the 300,000dpa target to local authorities on the basis that they each take a specific proportion based on one or more different factors. This “cascade” could perhaps be based on ONS projections or its housing stock, with adjustments based on affordability or other factors. The problem is that if you start with 300,000 you have to be very confident that every LPA will either meet its need in full or properly ensure unmet need is distributed to its neighbours.

A further alternative – albeit an undesirable one – might be to base needs on past delivery. Such an approach goes against the policy objectives to boost supply as it results in a form of negative circularity for areas seeking to reduce housebuilding.

It is possible to link employment growth to housing needs (commonplace within econometric models), but there are shortcomings: government would need to endorse a particular view on local economic growth levels when the basis of such forecasts is often opaque and contested; employment forecasts can be volatile (particularly at times, like now, of economic shock); job growth is not always the primary driver of housing need in a local market; and districts are typically smaller than travel to work areas containing both economic hubs and commuter areas.

Current approaches for assessing affordable housing need could be utilised, and then grossed-up to reflect the role of market housing in supporting its delivery. Unfortunately, there are data limitations and experience suggest this generate unrealistic outputs.

The solution may lie in a blended approach that draws together two or more of the above strands into a singular approach. But will it be simple and straightforward?

The current SM has resulted in a number of unintended consequences. The new approach should seek to address them – this probably means reduced reliance on volatile household projections.
We may need an amalgam of different approaches to reflect the nuances and difficulties of each area, but we will not achieve a perfect system that achieves simplicity at the same time as working for everyone and every location.
But there are two safety valves: 1) there should continue to be the ability in a very small number of cases to allow exceptions to the methodology; and 2) need is only the starting point, all areas will have the ability – as now - to justify not meeting LHN if to do so would not be consistent with the NPPF.
We can and we must do better than the current approach. And once we have established a method for assessing how many new homes we need– and it is required urgently to support plan making - we can then focus on delivering them.