Brian O'Connor 26 Oct 2020
After more false starts than the Grand National, the Greater Manchester Spatial Framework (GMSF) Publication Plan 2020 has finally been released. The GMSF 2020 will be presented to the Greater Manchester Combined Authority (GMCA’s) meeting on 30th October and will then be voted on by each of the 10 individual Greater Manchester Authorities (GM10) for approval.  The GMSF has been in production since 2014 and has undergone many consultation exercises. It has received significant criticism and opposition from both the development industry and local residents.
GMSF 2020 is the most progressed version to be released. Assuming it can secure approval from all 10 Greater Manchester authorities by the end of November, a formal 8-week consultation exercise will commence on 1st December 2020 and conclude on 26th January 2021.  Before the commencement of the consultation, there is likely to be some heated debates across Greater Manchester’s virtual Council Chambers. It is likely to be a turbulent few weeks in Greater Manchester politics. Indeed, Mayor Andy Burnham is urging opponents to the GMSF to ‘think long and hard’ and has added that the region ‘needed’ the GMSF to progress after five years of work.
The aim of this blog is to summarise the headline objectives and aspirations of GMSF 2020. A series of follow up blogs will be released delving deeper into the plan and the associated evidence base over the coming 5 weeks in the run up to the commencement of the consultation.  These blogs will look at issues such as housing land supply and housing mix, implications for town centres, employment land, economic growth and infrastructure requirements.
At the outset it is important to point out why a sound and ambitious GMSF is required in Greater Manchester.  The National Planning Policy Framework [NPPF] (§15) sets out that the planning system ‘should be genuinely plan-led’ and that ‘up-to-date plans should provide a positive vision for the future of each area’ … ‘ addressing housing needs and other economic, social and environmental priorities’.  There is also a policy requirement on Local Authorities to review their plans at least once every 5 years to ensure consistency with national policy (§33).
Many of the local authorities in Greater Manchester are relying on plans which are out of date and pre-date the first iteration of the NPPF (2012).  The table below sets out the year of adoption of each of the most recent plans on Greater Manchester authorities.  This indicates that only 3 of the 10 authorities have plans adopted post publication of the first NPPF and only 1 is less than 5 years old since its last review.

Given the age of many of the Greater Manchester plans, it is imperative to get a robust and ambitious plan in place as soon as possible to ensure the right amount and type of development in the right locations across Greater Manchester.  GMSF 2020 sets out some heady aspirations and wants to transform Greater Manchester into ‘a top global city (§2.17) by the end of the plan period.  Coupled with that, the GMSF recognises that ‘the strength and strategic location of Greater Manchester puts it in an ideal place to act as the primary driver for the Northern Powerhouse’  and ‘it will be important to deliver relatively high levels of growth within Greater Manchester for the wider benefit of the North’.
The GMSF has set out ambitious aspirations and objectives but do the policies on housing and economic growth align with them?
In terms of employment growth, the Plan seeks to maintain a very high level of economic diversity across Greater Manchester and facilitate the development of high value clusters in prime sectors such as advanced manufacturing, digital and cyber, health innovation and logistics.  The GMSF also makes provisions for the development of: 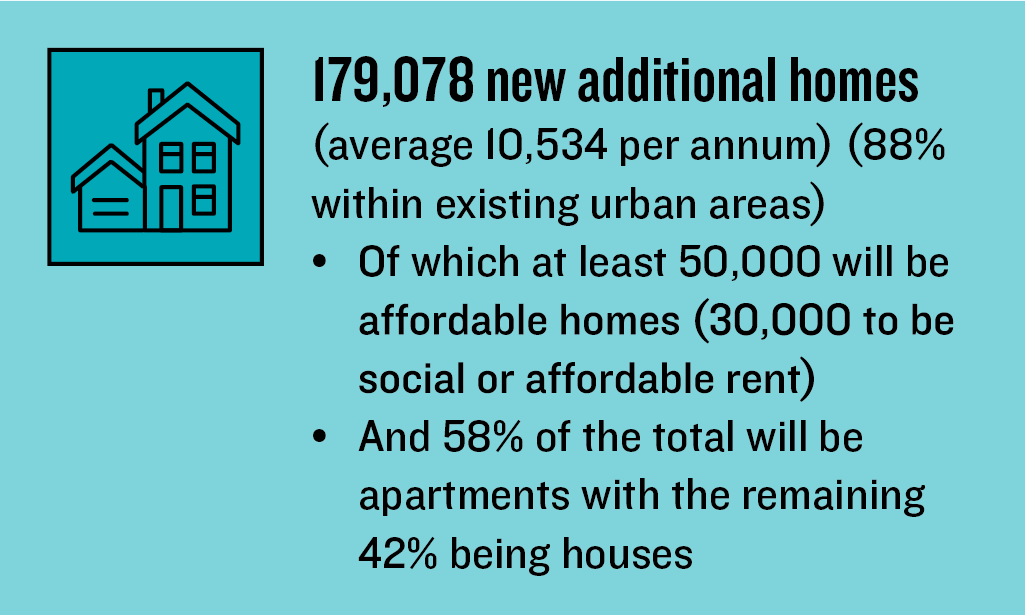 The plan recognises that the northern areas of Greater Manchester have had relatively low levels of growth over recent years and significant intervention will be required to rebalance the economy.  The GMSF seeks to direct growth to the north of the conurbation including the provision of a good supply of high-quality development sites and major transport improvements.  Investment in the key town centres of the north is also seen as playing a vital part in achieving this aspiration.

The Greater Manchester Green Belt has remained relatively intact since its designation in 1984 and its continued protection has facilitated that redevelopment of many brownfield sites across the conurbation.  However, GMSF 2020 recognises that there is an insufficient supply of housing and employment land to meet the identified needs.  As such, the plan seeks to allocate 1,939ha of Green Belt land for development.  This represents just 3.25% of the total Green Belt in Greater Manchester and 45% of Greater Manchester will continue to remain as Green Belt.  Since the 2016 version of the GMSF, the amount of Green Belt land proposed for development has decreased by 60%.
The Plan is also focused on the delivery of sustainable development and protecting the valuable Green and Blue infrastructure in Greater Manchester.  It also aims to deliver a carbon neutral Greater Manchester no later than 2038 with a dramatic reduction in greenhouse gas emissions.  To achieve this, it is expected that new development will: be net zero carbon from 2038; will incorporate electric vehicle charging point to future proof development; will prioritise connection to a renewable energy/heating/cooling network; and achieve energy demand reductions for residential development.
The viability evidence which underpins the GMSF is yet to be released. It will be very interesting to see how the plans ambitions for at least 25% of the total housing requirement to comprise affordable housing (particularly on brownfield high density sites) coupled with the ambitious sustainability, energy efficiency measures; and,  the significant infrastructure requirements across the north of the conurbation have been factored in and accounted for.
As set out at the beginning, the purpose of this blog is to provide an overview of the key headlines from the GMSF and our follow up blogs will delve deeper into the Plan itself, the associated evidence base (yet to be released) and discuss the possible implications for development across Greater Manchester.