Cause for concern? What does the new Standard Method mean for the North East?

Cause for concern? What does the new Standard Method mean for the North East?

Dominic Crowley, Fiona Braithwaite & Michael Hepburn 04 Sep 2020
The current Standard Method for calculating housing need was introduced in 2018 and was intended to significantly simplify the process of establishing local housing requirements and improve the efficiency of the plan-making process. It was a step in the right direction but fell significantly short of the mark on a number of key points including reliance on authorities choosing to set a far higher requirement than their minimum figure to achieve the national 300,000 dwellings per annum (dpa) target and driving need into London and the South East whilst doing the opposite in the North – a point which is certainly at odds with the Government’s agenda to ‘level up’ the economic and social disparities between many northern and southern authorities.
On the 6th August, the Government announced proposals in its Changes to the Current Planning System document which seek to remedy the shortfalls of the current Standard Method; setting a much higher bar for many Local Authorities and resulting in an uplift to the national housing requirement of 35% against the current Standard Method - from 250,550 to 337,307dpa.
The recent blog published by my colleague Bethan Haynes explores the national implications of the Standard Method however, for the purposes of this blog, we consider what the new Standard Method means for the North East.

An Improvement on the Current Standard Method

Taken at face-value, the revised Standard Method has a positive outcome for the region – seeking to address some of the previous concerns raised about the impact of assumptions within the calculation on the North. Almost all authorities across the North East see an uplift against the current method (aside from Stockton-on-Tees, County Durham and Newcastle upon Tyne which see a 6%, 10% and 25% reduction respectively) resulting in an overall increase of 1,026dpa (from 6,262dpa to 7,288dpa) from the current Standard Method in the region - an uplift of around 16%. In theory this is a positive step and may see additional opportunities for land promotion in authorities where there is an uplift against the current Standard Method as Local Plans progress and/or are reviewed. 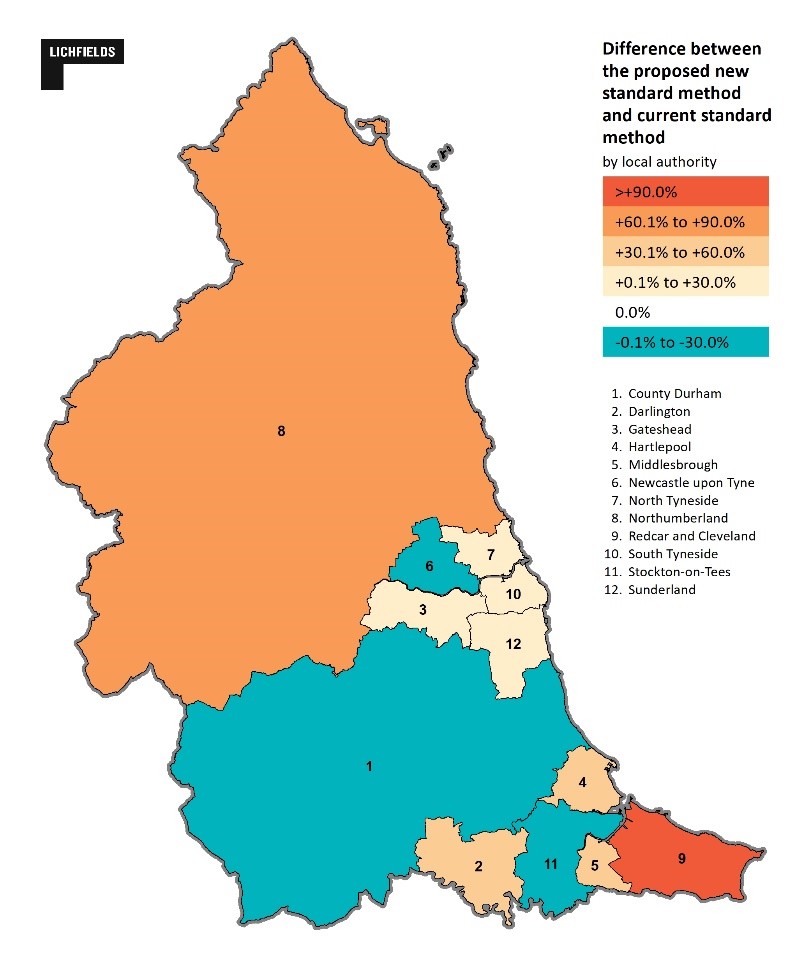 Contribution to the National Target

Delve a little deeper into the figures however and it becomes apparent that some of the issues with the previous Standard Method remain. First and foremost is proportionality of distribution; whilst the North East sees a 16% increase from the current to revised method this still falls well below the 35% national average uplift that the revised calculation brings and is in fact the third lowest proportional increase nationally (with only Yorkshire and the Humber at 9% and the East at 15% holding smaller proportions of the uplift).This shift also results in a reduction in the contribution that the region makes to the national total from the already inadequate 2.5% under the current method down to only around 2.2% - significantly below the region’s existing national household contribution of around 5%[1]. This is particularly concerning when measured against some southern regions such as London which will see a staggering 67% increase from the current method and which would constitute over 25% of the national total housing requirement alone under the revised method.

The revised method also still provides significantly fewer homes than recent delivery in the region – a clear spatial disparity for northern authorities compared with central and southern regions where the Method sets a need figure that is often far in excess of that which the market has been able to achieve.
For the North East, the shortfall between the proposed new method and recent delivery is around 2,800 dwellings per annum – over 25% of the average supply delivered across the region in the last 3 years. Whilst it must be acknowledged that this is an improvement against the current standard method position (which sees a shortfall of around 3,800dpa) it still falls far short of the numbers currently being delivered in the region and would effectively restrain the North East housing development industry. 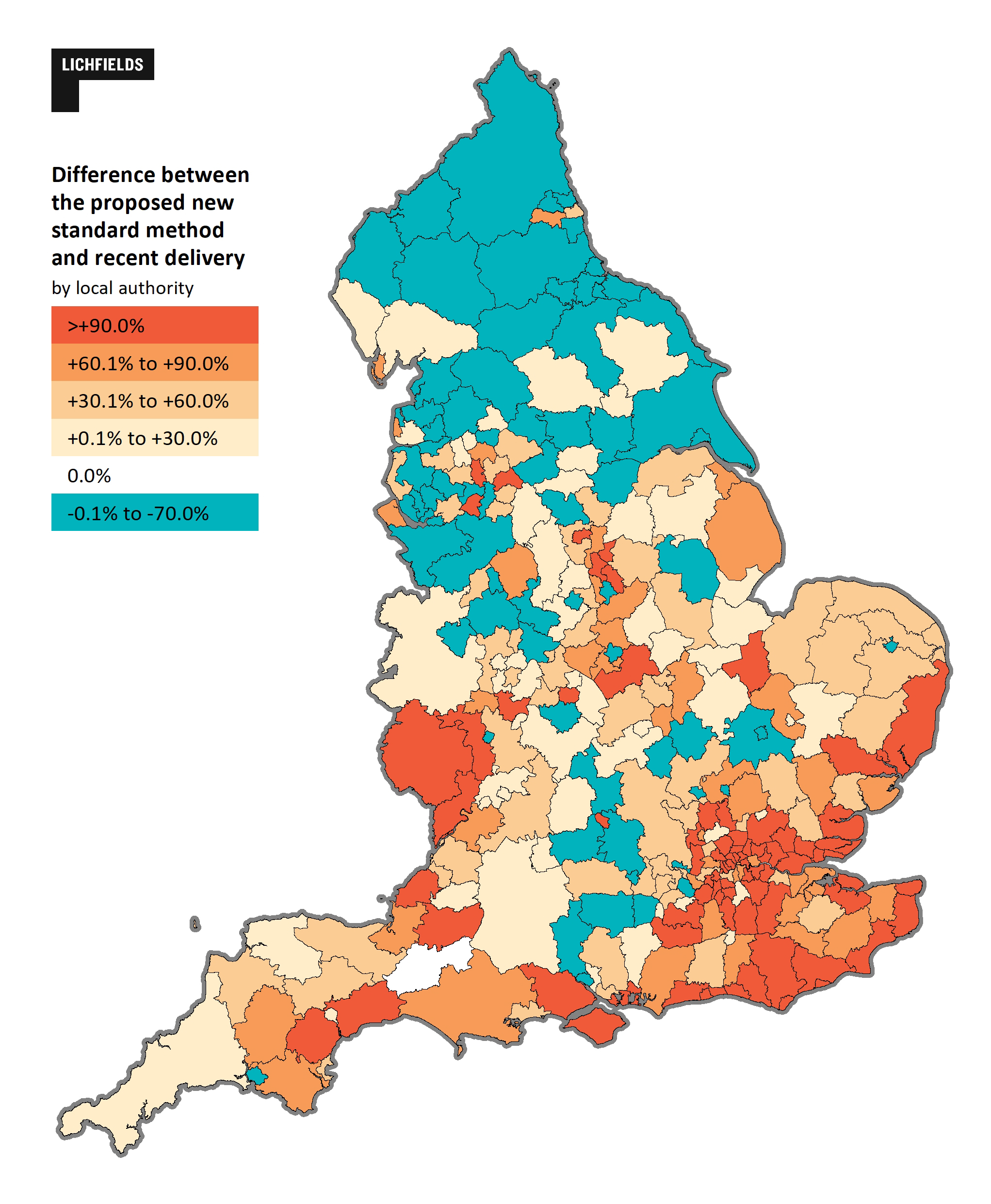 At a Local Authority level only two of the 12 authorities see an uplift against average recent delivery (Gateshead and South Tyneside) with some others falling well below the mark – most notably, Newcastle upon Tyne would see a 66% reduction against recent delivery. 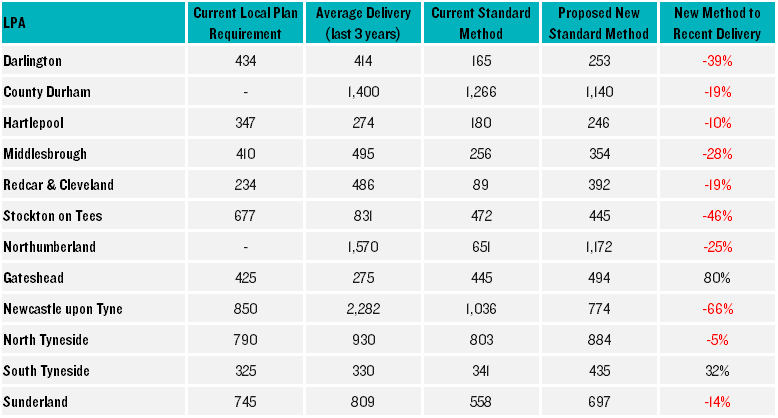 Why does the Standard Method have these Impacts?

The new Standard Method is more complex than the original, moving away from the Government’s intention to make the process simple, transparent and understandable for non-experts. Whilst we are still analysing its mechanisms, it is clear that   Step 1 of the proposed Method still results in a low starting point upon which Step 2 is applied. It has been widely acknowledged (including by the Government) that an over-reliance on population projections provides an inadequate basis for calculating housing need due to the way in which they continue patterns of historic undersupply in the region.
Whilst the new Standard Method includes an alternative increase based on the size of the existing stock (if that is higher than the population projection), for most North Eastern authorities this isn’t enough (a 0.5% increase is used despite the Government acknowledging that annual growth is typically 1%) to overcome the constraints imposed by the baseline starting point for the Standard Method.
The Government’s intention to use the Standard Method to address affordability problems means that, when considered nationally, the North East’s affordability problems appear relatively less significant. This means that the part of the equation that boosts supply based on unaffordability is heavily skewed towards the acute problems with this issue in some southern authorities. It therefore doesn’t lift the North Eastern authority’s figures high enough to recover from the baseline starting position earlier in the equation.
In fact, housing need is based on a wide variety of factors, often with complex interactions. For example, the Government’s own consultation document refers to regeneration and stock mismatch due to insufficient homes of the right size, type and tenure at paragraph 19. However, the Standard Method largely disregards these factors and focuses solely on affordability, meaning North Eastern authorities’ ability to transform their areas, meet local housing needs and drive economic growth is constrained. Whilst each authority can choose to enhance its Standard Method figure, previous research by Lichfields has confirmed that in reality this does not occur sufficiently.

There is therefore huge cause for concern; whilst the overall increase in housing need figures will bring opportunities in some areas, the revised Standard Method would actually lead to harmful impacts for the North East. The disparity with previous delivery and the reduction in proportional distribution (particularly at a national level) are key areas of concern and risk restricting growth across the region to a level well below that which the market has delivered in recent years. Far from ‘levelling up’ the country, the new Standard Method could actually exacerbate the problem.
Opportunities however still exist - unless a dramatic increase can be achieved and sustained from the recent peak in delivery of c.40,000dpa the housing requirement set for London is likely to underdeliver by at least 50,000 units per annum . This alone would mean 300,000dpa nationally is not achievable without other regions delivering significantly more homes than the current and revised methods make provision for. The North East may hold part of the solution to this – if the revised standard method could ensure a more proportional distribution of the housing requirement across the country and seek to set much more ambitious minimum figures in authorities which have demonstrated they can deliver well in excess of the current and proposed methods (as many in the North East have) this would offer multiple benefits by reducing the over-reliance on London to achieve the 300,000dpa target and driving more clearly towards the Government’s ambition to ‘level up’ the country with all of the associated economic and social benefits that would bring for the North.
Changes to the Standard Method to achieve this could involve tweaks and adjustments to the Government’s equation (a greater increase based on the existing housing stock or an adjustment to the affordability multiplier for example). However, the solution may lie in recognising that it simply isn’t possible to standardise such a complicated matter, which becomes many times more complex when the huge variations in conditions across the country are taken into account. A more nuanced and subtle approach is required linked to the specific circumstances of each authority. That could mean returning to the pre-Standard Method approach and introducing a lesser degree of standardisation but still allowing for the crucial adjustments needed to reflect local circumstances such as historic growth, economic growth and spatial strategies. Whilst that won’t be a (relatively) simple equation, it should produce far more appropriate outcomes for more authorities and prevent the extreme positive and negative results generated by the Standard Method.
We are currently undertaking more research for various organisations to understand why the equation produces such negative results for the North East and how this can be rectified. The Government’s consultation on the proposed revised Standard Method closes at 11:45pm on 1 October 2020. Please get in touch if you are interested in making representations.
For implications of what the New Standard Method means for other regions, see below perspectives:
London   |   North West   |   Thames Valley   |   South West   |   West Midlands   |  Yorkshire and The Humber