Andy McLaren 22 Jan 2021
Following approval by the Liverpool City Region Combined Authority [LCRCA], a public consultation on the Liverpool City Region [LCR] Spatial Development Strategy [SDS] commenced on 10th November and will run up to the 1st February 2021. This consultation represents the second public engagement on the SDS, following an initial consultation exercise in 2019.
This blog assesses the key content of the consultation, and explores whether the objectives of the LCRCA can realistically be achieved through its proposed strategy for housing and economic growth.

What is the LCR SDS?

The SDS will set out a spatial planning framework for the LCR for the next 15 years, covering the City of Liverpool and the Metropolitan Boroughs of Knowsley, St Helens, Sefton, Wirral and Halton.
The SDS will be different to the Greater Manchester Spatial Framework [GMSF] in that it will not allocate housing and employment sites throughout the region and will not make changes to Green Belt boundaries. In the LCR, these policies will be contained within the development plans for the constituent local authorities.
Based on the recent struggles experienced by the Greater Manchester Combined Authority in adopting the GMSF (see my colleague Brian O’Connor’s blogs on this topic[1]), this key difference may lead to a quicker adoption of the SDS – but does it really harness the huge potential of the City Region?

Purpose of the Current Consultation

It is encouraging to see the SDS progressing and taking shape despite complications presented by the pandemic.
In terms of its content, the consultation is focused on the overall vision for the SDS, and is based around 5 key strategic objectives and policy areas (see Figure 1):
Figure 1: 5 Strategic Objectives of the SDS 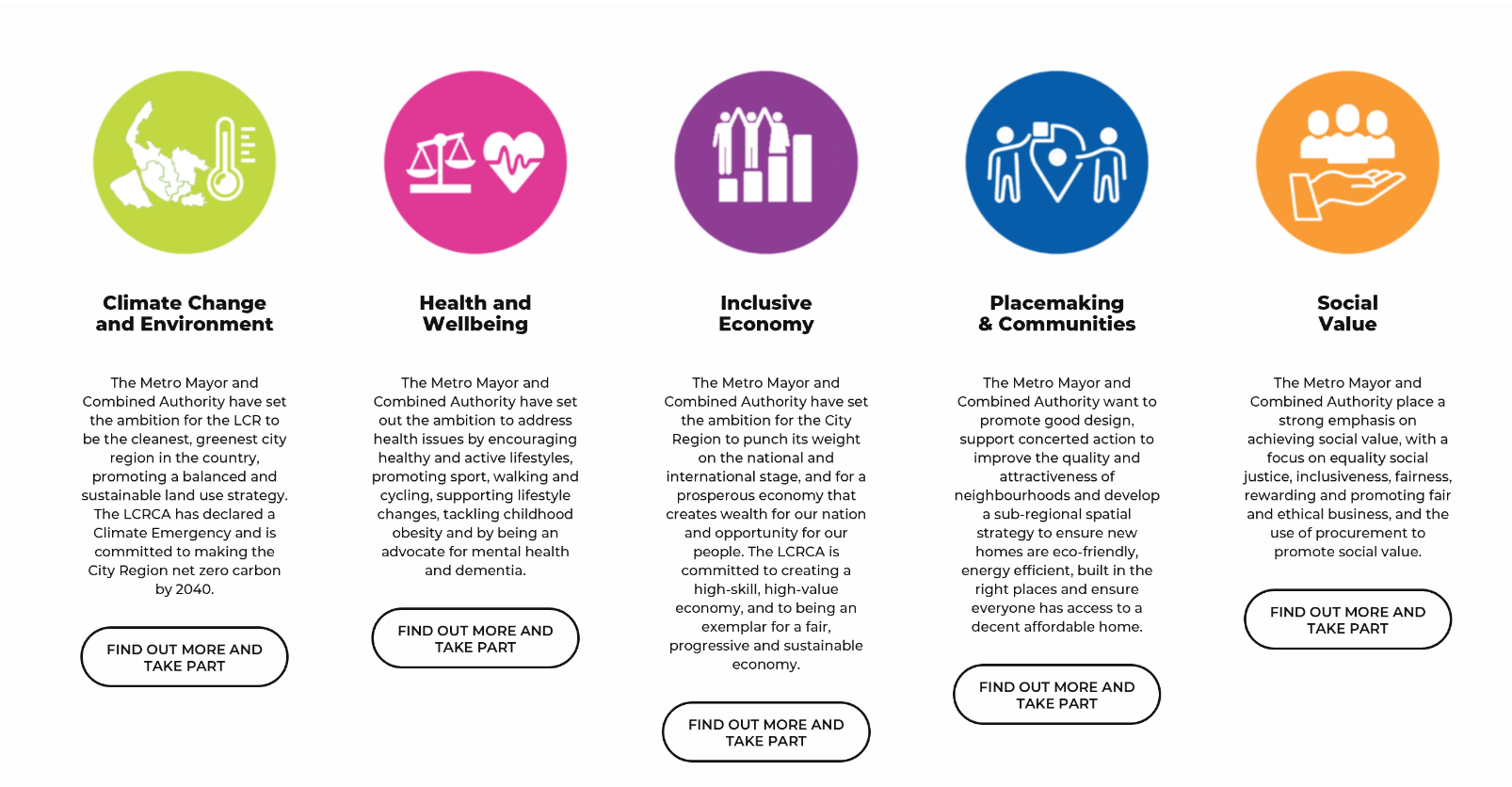 These objectives are well-intentioned starting points from which to develop detailed policies.  The LCRCA is obligated to address key themes such as climate change and health and well-being, and has also sought to pursue an inclusive growth strategy alongside this with a clear focus on promoting social value and creating high-skilled, quality employment across the City Region.
There is significant merit in this approach, which if addressed effectively alongside an ambitious plan for housing and economic growth, will benefit both current and future generations living and working within the LCR.
However, my concern with the LCR is not necessarily what it is saying at this stage - which are generally high level aspirations that in many cases are difficult to disagree with - but what it remains silent on.  There is next to no detail on what will ultimately be the most crucial (and most controversial) aspects of the SDS, namely the scale of housing and employment need and its spatial distribution across the LCR.
Although this is expected to be published in the next round of consultation in Summer 2021, it is difficult to be too enthusiastic about the latest draft without understanding the direction of travel that its growth agenda will ultimately take.
It is acknowledged that the LCR had sought to wait for the outcome of the Standard Method review, though question marks remain over the general approach being pursued by the Combined Authority.

In the context of the Government’s aim to try and ‘level up’ the north, there is a considerable opportunity for the LCR to take a leading role for growth and set ambitious housing and employment targets which go above and beyond.
However, the LCR will not be reviewing or releasing Green Belt through the SDS, and will instead pursue a ‘brownfield first’ approach to development.  Targeting brownfield land first signifies a policy compliant approach which ties in with Government objectives – though it arguably does not represent an ambitious ‘pro-growth’ plan.
It is widely acknowledged within the industry that there are significant viability issues associated with developing brownfield land within the City Region, and the LCRCA has itself acknowledged this by seeking significant levels of funding from Government to unlock these sites for development.
However, there is currently no indication as to how much funding the LCR will be receiving, and there are obvious question marks as to whether the amount due to be handed down will enable the LCR to fully address the scale of the viability issue.
Furthermore, the Standard Method 2.0 will lift the housing numbers for Liverpool City by over 35% (as explored below), and even more land in the urban area will therefore be required to accommodate this hugely increased need.

Impact of the Standard Method 2.0

The Government launched the new Standard Method for local housing need on 6th August 2020.  However, the Government revised its approach and issued further updates to the Standard Method on 16th December, simply reverting back to the method it introduced in 2018, but with a modification to top up numbers in the 20 largest cities and urban areas by 35%[2].
This 'cities and urban centre uplift' of 35% applies to the City of Liverpool, which results in an increased need of almost 545 dwellings per year from the previous Standard Method figure (see effect of the uplift in Table 1 below).

The uplift represents a reduction on recent delivery (2017-2020) of 397 dwellings per year, which on face value would suggest that accommodating this increased need may not be an issue, as they have recently been delivering far in excess.
However, the uplift is expected to be met by the cities and urban areas themselves rather than the surrounding areas, with brownfield and other under-utilised urban sites prioritised[3].  For the City of Liverpool this increase will predominantly need to be met on land within the urban area.  With brownfield land already in scarce supply, this could create problems further into the next plan period.
It will be interesting to see whether this uplift influences the proposed approach being taken by the LCR, or if they continue along the same path regardless.

Where will the houses go?

The factors outlined above leads me to one main question:
It is unrealistic to consider that a ‘brownfield first’ approach will provide even the bare minimum of land required, particularly with the additional 35% uplift also applicable in Liverpool.
Furthermore, delivering housing solely on brownfield land in the urban area is likely to result in the delivery of predominantly higher density development (i.e. apartments).  Over the last twenty years, the majority of new housing delivery in Liverpool City (some 90%) has taken the form of flats.
A continuation of this approach neglects a clear need for a wider mix of market and affordable housing in the LCR, particularly the delivery of homes with gardens or outdoor amenity space.  The demand for traditional family homes with gardens is also likely to have increased as a result of the pandemic as people reflect on their living environments.
It is likely that the LCRCA will need to do 2 things in order to address this and achieve its overall vision and objectives:
Based on evidence from around the country (including Greater Manchester), distributing any unmet need across constituent authorities has proven to be a painstaking process, and is rarely completely successful when numerous local authorities are involved dealing with large housing numbers within complex urban areas.
Green Belt release will obviously be met with widespread objection.
The LCRCA may therefore view these options as undesirable, but could be left with no viable alternative.  Clear answers on this issue will need to be provided by the Combined Authority through the next consultation.

Preparation of an ambitious, ‘pro-growth’ spatial plan presents a significant opportunity for the LCRCA to take a leading role for growth in the North West, helping to deliver the Government’s levelling up agenda and tackling the deprivation experienced across the City Region.
This consultation provides a (tentative) first step on this path providing very limited detail on key issues, but does identify a number of important high level objectives centred around achieving inclusive growth, promoting social value and responding positively to health and well-being in light of the COVID-19 pandemic.
However, looking ahead, the Combined Authority must seek to do more than just provide the bare minimum in terms of housing and economic growth in order to realise its objectives.
One only has to look down the East Lancs Road to see an example of a cautionary tale in spatial plan preparation, with the GMSF failing in its ambitions for achieving aspirational growth for the Greater Manchester sub-region.
Preparation of the framework has been plagued by mixed messages from politicians, a suppression of growth needs despite all available evidence, and an overriding reluctance to release Green Belt land.  This has led to consistent infighting amongst constituent authorities, considerable delays and ultimately a failure of the plan making process.
It is hoped that the LCR takes note of this and seeks to avoid the same pitfalls and failures moving forwards.  The next engagement is key to identifying ambitious housing and employment land targets – and perhaps an entirely different spatial approach – in order to shape the SDS into a positive and transformational spatial plan for the City Region.