Edward Clarke 18 Nov 2022
Another year of crises and turbulence has left us once again with yet another new Chancellor delivering a fiscal statement in ‘unprecedented’ times. The inter-related challenges of the war in Ukraine, COVID recovery, supply side inflationary shocks and concerned market analysts leave the country facing ‘eye wateringly difficult’ decisions to tackle inflation, restore stability and get debt falling.
So less than eight weeks since Kwasi Kwarteng delivered the now infamous “mini-Budget” which stood out as the largest tax-cutting budget for 50 years, his successor Jeremy Hunt pivoted sharply to measures that will mean the highest tax burden in the UK’s post-war history by 2027-28 – equivalent to some 37% of total GDP.
After the fallout from the mini-budget, the markets, the Bank of England (BoE), and now the OBR have all had their say: any talk of fiscal headroom has vanished. Far from the boosterism of previous statements, this government’s priorities are now stability, growth and public services.

Return to the orthodoxy

To reassure markets after recent turmoil, we were left in no doubt that the Office for Budget Responsibility (OBR) are back in the centre of things, having been essentially ignored by Kwarteng. Their independent forecasts for the economy and the public finances arguably now have more weight than at any point in the OBR’s 12 years of existence.
The OBR forecasts are similarly pessimistic in the near term to the Bank of England (BoE) (announced earlier this month), with a 1.4% decrease in GDP forecast for 2023 (1.5% BoE) but are more optimistic that this will not be the long recession forecast by the Bank of England, rebounding to growth of 1.3% in 2024 (-1% BoE 2024) and 2.6% in 2025. Even in this scenario, the OBR forecast that the ‘output gap’ will not see the economy recover to potential output levels until mid 2027 (i.e. when energy prices and inflation are set to drop) assuming that monetary policy responds to the fiscal tightening with equivalent easing.
Comparison of forecasts for real GDP growth 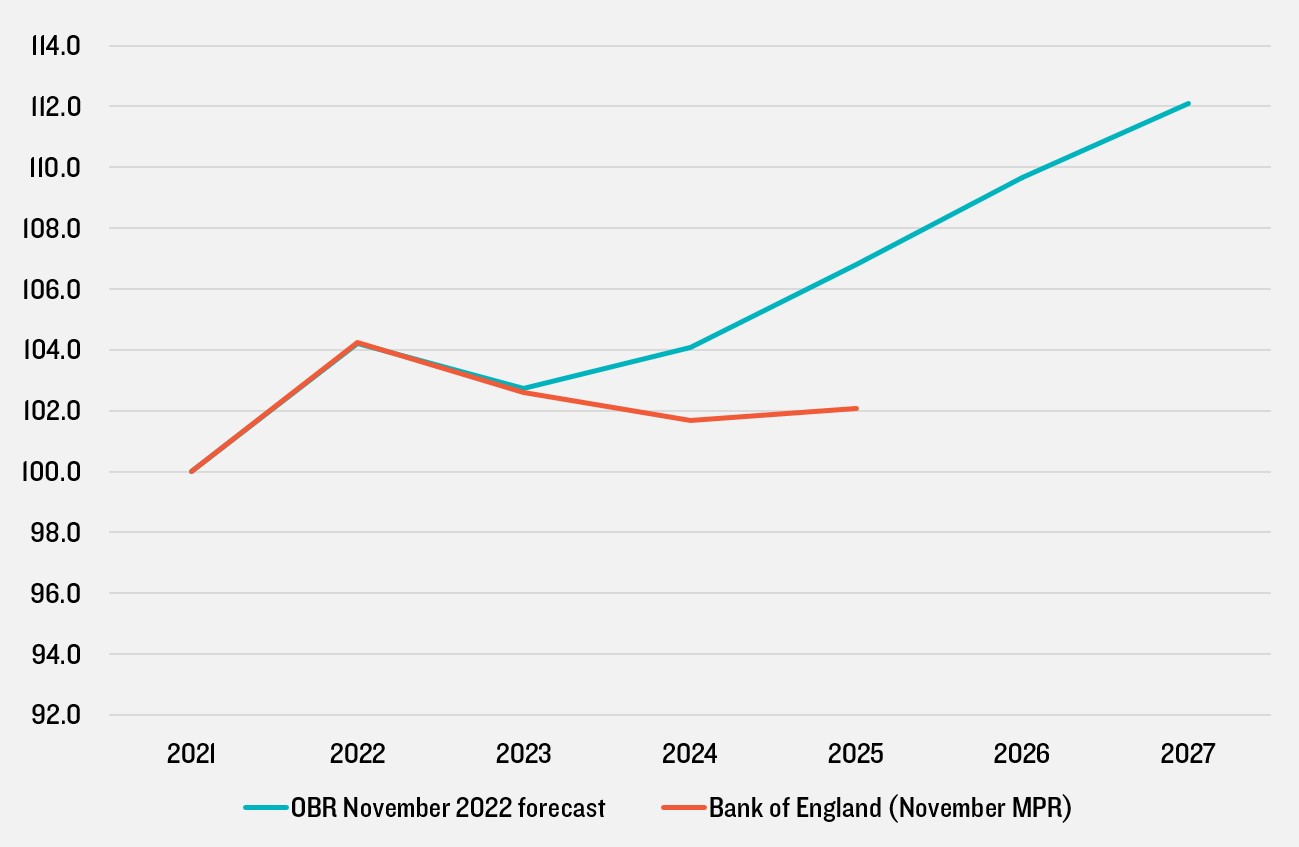 Much of the difference can be attributed to the policy measures announced, that the OBR have been privy to in arriving at their forecasts. The reaction of the Bank of England will at least in part tell us whether the fiscal and monetary policies are in lock step.
Similarly, historically sluggish business investment, already the focus of the Prime Minister’s Budget last year when Chancellor, is 8% lower than pre pandemic levels and set to stay lower until Q3 2025.
Business Investment levels 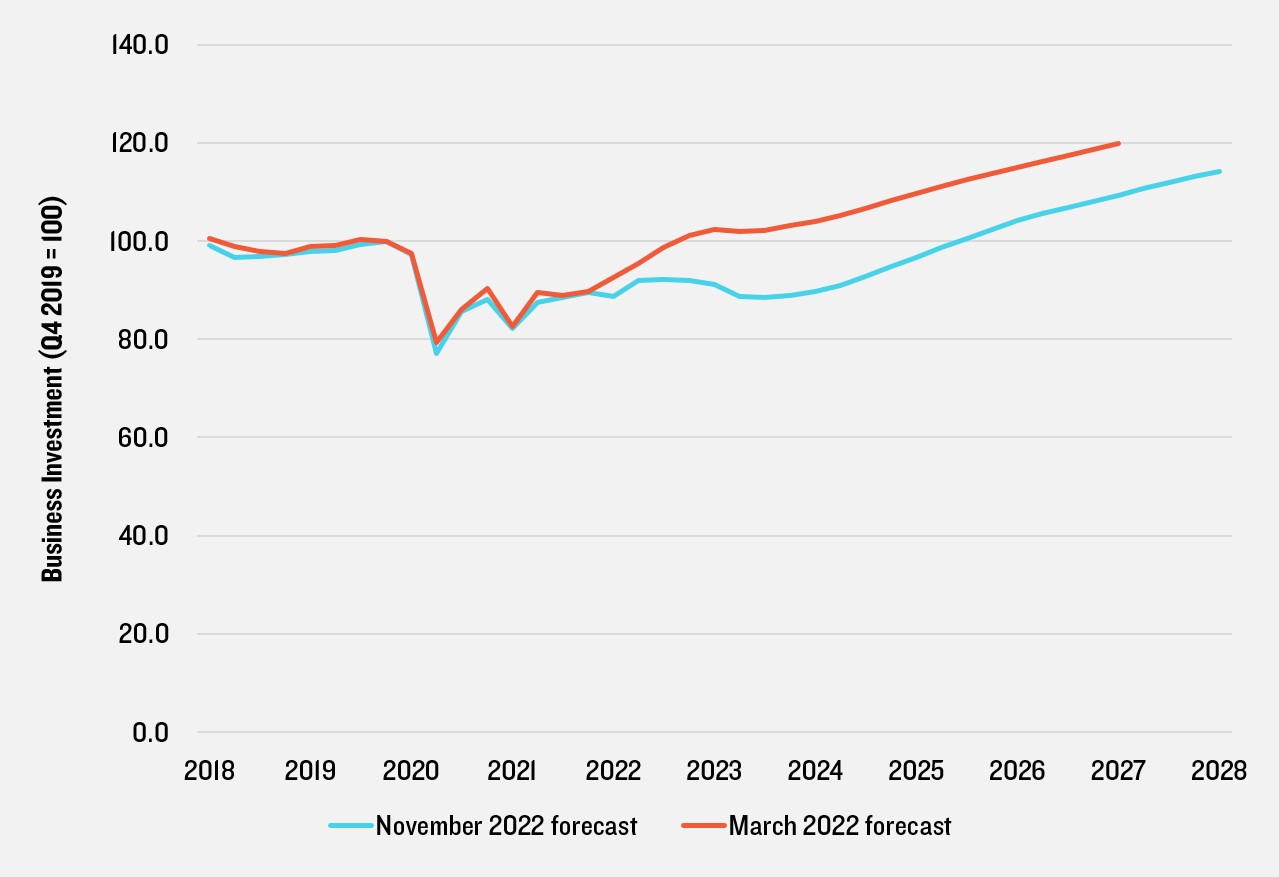 The Chancellor has been clear that addressing the ‘fiscal black hole’ means that all spending decisions have to add up to the forecasts which will really put the OBR in control. Therefore in a marked reversal from the last fiscal event there were no ambitious supply side reforms or investments, although planning reform remains part of the agenda with announcements to follow.

The Autumn Statement confirms that departmental budgets will be maintained at least in line with the budgets set at last year’s Spending Review, albeit inflation is eroding these in real terms. Under the previous period of austerity, local government funding saw a disproportionately high proportion of the overall cuts. According to Centre for Cities analysis, local government in England saw its budget cut by more than half between its peak in 2009/10 and 2015/16 and the Institute for Fiscal studies analysis of the Autumn Statement make clear that the cuts of the 2010’s will not be undone for the Department for Levelling Up Housing and Communities (labelled as Housing and Communities in the chart below).

Local authorities – some of which are claiming they are close to bankruptcy including Kent and Hampshire – will therefore likely welcome the additional flexibility granted by the Chancellor to raise Council taxes, providing some of the fiscal devolution that local areas have asked for. However social care will consume much of this. The Chancellor has allowed Council tax to be increased by up to 5% including a 2% social care precept.

Levelling up appears to be back, but under the austere spending expectations there were no ‘rabbits out the hat’. The second tranche of the Levelling Up Fund will be £1.7 billion – similar to the first tranche.
New and confirmed devolution deals for Cornwall, Suffolk, Norfolk, and the North East (which is awaiting confirmation of its constituents as to the inclusion of Durham) were announced.
Devolution was also mentioned as a driver of growth. In particular, the trailblazer deals for Greater Manchester and the West Midlands, with the potential for ‘departmental-style’ settlements at the next spending review with the suggestion that this is a move away from the much maligned competitive bidding processes.
The proposed Investment Zones – one of the flagship proposals in the mini budget – have largely been watered down and will be ‘refocused’ around universities but there will be no tax reliefs or budgets associated with them. The existing expressions of interest from local authorities will not be taken forward which will no doubt leave many frustrated.
The government has also scrapped the list of infrastructure projects that were flagged for acceleration in the Growth Plan but there was a return to more of the priorities of the levelling up era. The Chancellor recommitted to HS2, Northern Powerhouse Rail and East West Rail investments.
There was notably no mention of the Shared Prosperity Fund, which poses some technical questions about the ability for local areas to spend the expected £400m fund which was to replace EU funds.

The Autumn Statement offered little by way of specific measures on housing and planning, so industry minds will instead be focused on the upcoming planning reforms – likely being re-drafted given the changing priorities of the day, the return of Michael Gove to his former brief, and the levelling up and regeneration bill currently passing through the House.
The exception was the stamp duty cuts which are now scheduled to continue to April 2025, when they will be tapered. Despite this measure, the OBR house price forecasts are somewhat stark – with prices not forecast to return to current levels until 2027, this is likely due to the overwhelming effect of mortgage costs outweighing any fiscal benefits from the stamp duty relief.
House Price and Mortgage rates

Away from the Autumn Statement, the Secretary of State has restated his commitment to the manifesto pledge of delivering 300,ooo homes a year. Building ‘beautiful’ homes has been retained as a priority, and as a way to achieve local support for house building. Howeverwith less funding and dwindling parliamentary time meeting this target will become increasingly difficult to achieve with the OBR forecasting that net additions to fall from current levels (NB this is for the UK not England).
Net additions to the housing stock, UK 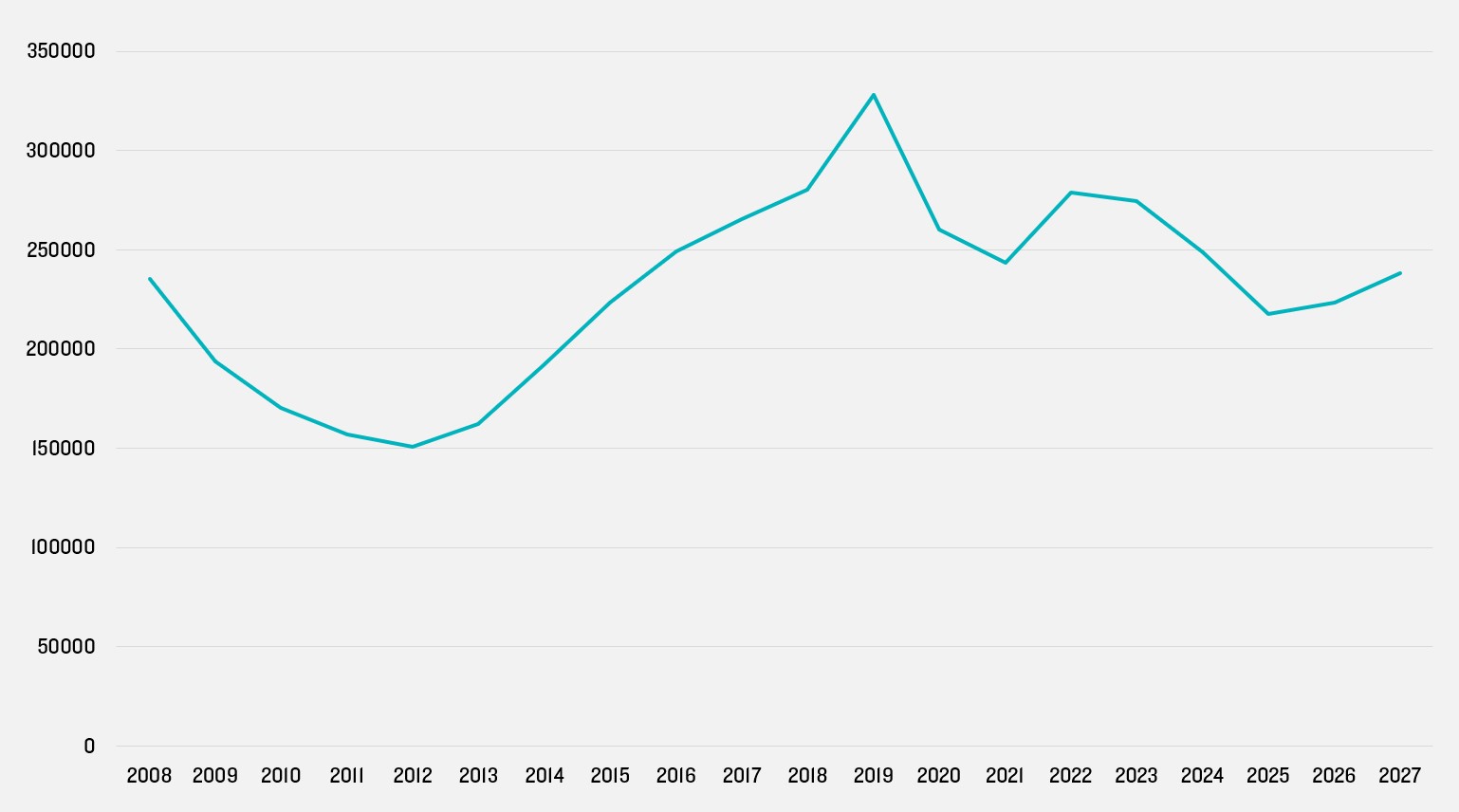 The Chancellor’s priorities from the Autumn Statement were clear.
Top of the list was to provide stability, and the initial market response suggests the Chancellor has delivered on this. Many of the measures and the gloomy economic forecasts were expected, and the tax rises and spending constraint marks a significant – albeit well trailed – about turn from the ‘boosterism’ of the previous Prime Ministers.
In the medium to longer term, the Chancellor has acknowledged that growth will be key, it is encouraging that the Chancellor has maintained that levelling up will be part of this: more devolution deals, and further deepening of devolved funding to Manchester and the West Midlands as pilots. However without any real accompanying incentives of more funding and new infrastructure, the economic and political reality of how this growth conundrum will be achieved remains to be seen.
Maintaining and improving public services in a recessionary period will be difficult, and it is with trepidation that we await the funding agreements for local government already tasked with the overwhelming challenges of adult social care. The tight spending plans from 2025 onwards imply annual cuts for some budgets of 0.7% per year; for local government this is on top of a long period of ‘efficiency savings’ and could result in even more over-stretched services.
With Government and business investment at a minimum attention within the built environment sector now turns to the Secretary of State to see how planning reforms could contribute to the supply side boost that the economy so clearly needs, but acutely aware there will be less public money available to support it. The need to incentivise and provide a clear pathway for private sector investment has never been greater.

This publication has been written in general terms and cannot be relied on to cover specific situations. We recommend that you obtain professional advice before acting or refraining from acting on any of the contents of this publication. Lichfields accepts no duty of care or liability for any loss occasioned to any person acting or refraining from acting as a result of any material in this publication. Lichfields is the trading name of Nathaniel Lichfield & Partners Limited. Registered in England, no.2778116