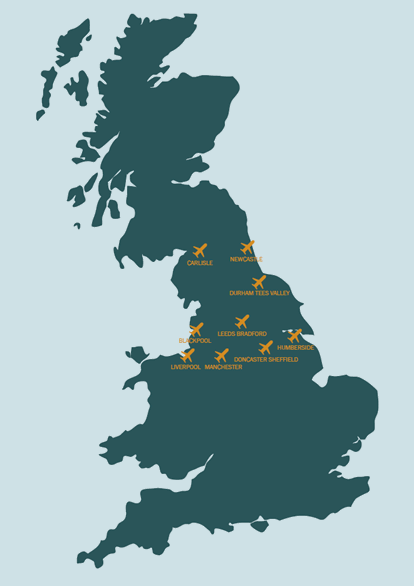 Manchester Airport accounts for nearly two-thirds of scheduled passengers in the Aviation Powerhouse and 85% of the flights to destinations outside of the EU. Newcastle has a transatlantic offer too and the other five airports provide a comprehensive network of EU and UK linkages, including to European global hub airports in Amsterdam, Frankfurt, London, Madrid and Paris. Manchester also accounts for over 90% of freight by volume, whilst the volume of freight handled at Doncaster/Sheffield is growing rapidly; in 2015 it was over 9-times its 2013 levels. 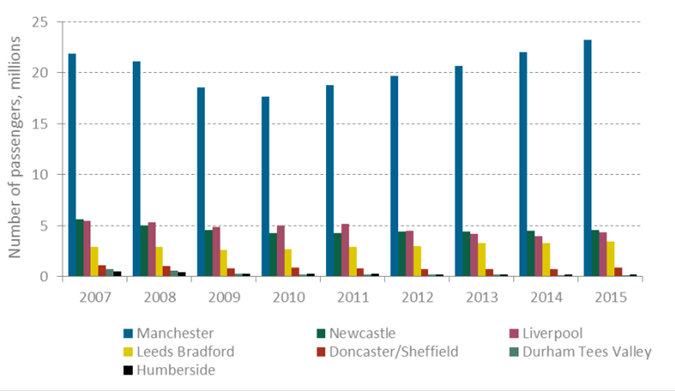 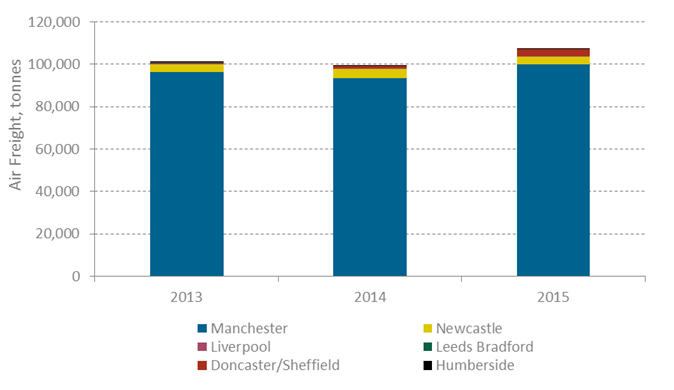 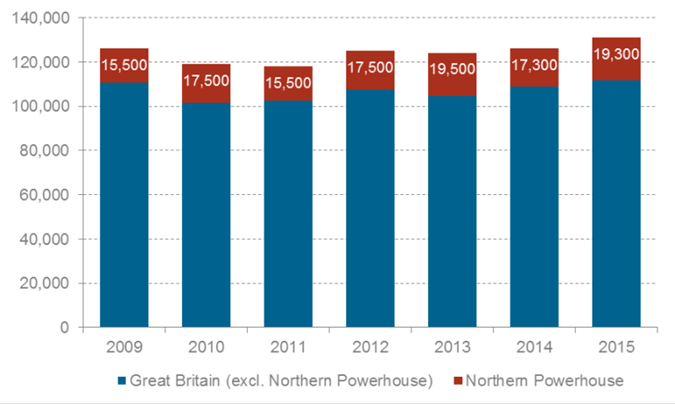 Source:       Oxford Economics, Centre for Cities, Lichfields Think Tank
Morgan-Hyland and Edwards agree that there is clear evidence of the economic benefits resulting from recent growth and success of the Aviation Powerhouse. In addition to experiencing considerable employment growth in recent years, aviation is increasing the output and productivity of the Northern Powerhouse. For example, aviation plays an integral role in ‘Just-in-Time’ manufacturing production, by transporting high value and low volume components and personnel[5]. This is particularly important for some of the world’s leading car manufacturers; Ford, Jaguar Land Rover and Nissan are all based in the Northern Powerhouse. In return, these benefits can generate positive secondary aviation impact such as additional business growth, employment, and fiscal benefits locally and nationally including revenue for HM Treasury.
The Aviation Powerhouse has significant potential for future expansion in passenger and freight markets, as well as the business aviation and general aviation markets. It has already experienced significant growth in scheduled traffic in recent years. The Aviation Powerhouse is surely a concept for the Northern Powerhouse and the aviation industry to embrace as it drives growth and helps to rebalance the UK economy.
Brendan Edwards is a Senior Economics Consultant and Stephen Morgan-Hyland a Planning Director, at Lichfields Manchester. For more information about Lichfields' expertise in Aviation, click here.

Brexit and the Aviation Industry

Brexit and the Aviation Industry