The pressing need to build more new homes has gained significant traction in recent years and it is identified now as a national crisis. After featuring prominently in the 2017 political manifestos, Prime Minister Theresa May has identified that the number one domestic priority is to increase the rate of house building to 300,000 homes a year by the mid-2020’s[1].

Delays in house building are often blamed on the planning system and, more recently, accusations of land banking have surfaced frequently in the media. In response, an independent review – led by Sir Oliver Letwin – was commissioned “to tackle barriers to building”.

Much of the attention has concentrated on trying to understand the reasons for delays after development proposals have been approved, however there has been little said about the trials and tribulations of reaching this position. It is very rarely straightforward and the determination process can be frustrating when there do not appear to be any outstanding concerns, yet an application is refused by members against an officer recommendation for approval.

At the Planning for Housing Conference on 4 October 2017[2], a local council leader told a conference seminar that planning committee members rely on the advice of officers “nine times out of ten times” and that members are “rarely party political and tend to make decisions more on the basis of geographical or local knowledge”. In our experience, these statements perhaps underestimate just how often this occurs - particularly with applications for major developments.

The examples of two planning appeals in recent years for sites in the North East can be cited, which followed applications that had been refused by members contrary to officer recommendations. As both appeals were subsequently allowed, the obvious questions were (a) whether the appeals could have been avoided and (b) how much time and cost (for both sides) having to go to appeal had added to the process. Time and money are particularly relevant, when there is a clear need to speed up the rate of building new homes.

At the time of submitting a planning application for a major development proposal, applicants can (in theory!) expect to receive a decision within the statutory 13 weeks. Where a planning application takes longer than the statutory period to decide, the Government’s ‘planning guarantee’ states that a decision should be made within 26 weeks and that “no application should spend more than a year with decision makers, including any appeal”[3]. To put this into the context of these two appeals, one complied with the ‘planning guarantee’ however the time from submission of the planning application to receiving the appeal decision for the second case extended well beyond the Government’s policy at 23 months.

These timings do not actually tell the full story as for each scheme an earlier planning application had been refused; new applications had been submitted and the development proposals considered at appeal represented revised proposals. Following the refusal of the earlier applications, in each case the applicant had sought to address the issues raised locally and used the appeal process only as a last resort.

Therefore in these examples, the true length of time it has taken to achieve planning permission for each site, from submission of the earlier planning applications to receiving the appeal decisions for the revised schemes, is 34 months and 42 months respectively.

Lichfields’ Refusal for Good Reason, published last week, looks into the subject of members’ decisions against officer recommendations, to understand whether this is a common occurrence and to assess whether there is any issue with the quality of decision making. 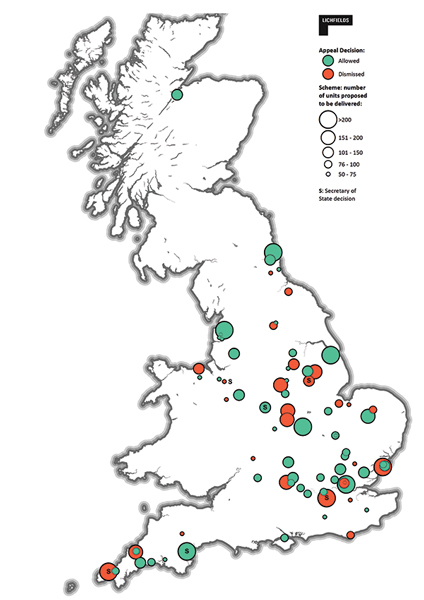 The research considered all appeals in 2017 for proposals of 50 homes or more. 78 out of the total 309 appeals (25%), as shown above, related to applications that had been refused against an officer recommendation for approval. 65% of these 78 appeals were allowed and, as a result, around 6,000 new homes could be delivered. In comparison, 40% of appeals were allowed in instances of officer-recommended refusal of planning permission.

The research findings indicate that the percentage of allowed appeals (for applications refused against officer recommendation) is generally higher when the reasons for refusal relate to technical matters compared to appeals where the main issues are more subjective.

Lichfields’ research also considered the time that an appeal can add on to the end-to-end housing development process. Of the 78 appeals considered, the average time from receiving a decision notice to the determination of an appeal was 11 months; however, this time period varies between 4 and 19 months. As shown below, the time period increases with the number of new dwellings proposed. For developments of less than 150 new homes, the average time from decision notice to appeal decision was 10 months; however, this increases to 13 months for developments of 150 houses or more. Generally, it is therefore reasonable to assume that an appeal is likely to add a year on to development timescales. 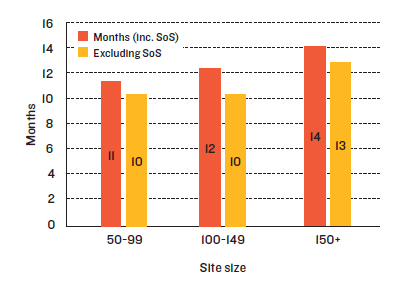 So, in answering the questions posed above:

Lichfields’ research concludes with a series of recommendations to improve the quality of decision making which include: