Summer Haly 15 Nov 2018
Last week I attended the National BID Conference 2018, hosted by the British BIDs network, where delegates engaged in a lively debate on the key issues facing Business Improvement Districts (BIDs) across the country, and how places need to evolve to survive. It seems timely therefore to reflect on the growth of UK BIDs in recent years, and the opportunities they present for those working in planning and economic development.
Originating in North America, Business Improvement Districts are partnerships between local authorities and local businesses whereby businesses within a defined area or ‘district’ pay a levy to local authorities. The levy income allows members to benefit from shared services such as street management, security and investment in green infrastructure which can often be under-resourced within conventional local authority budgets. According to there are currently 305 BIDs operating in the UK and Ireland, a figure which has tripled since 2010.
The map below shows that BIDs are mostly concentrated within large cities and major town centres, a reflection of the fact that BIDs are commonly town centre- It also shows that BIDs tend to be most common in parts of London, the South East and Midlands. 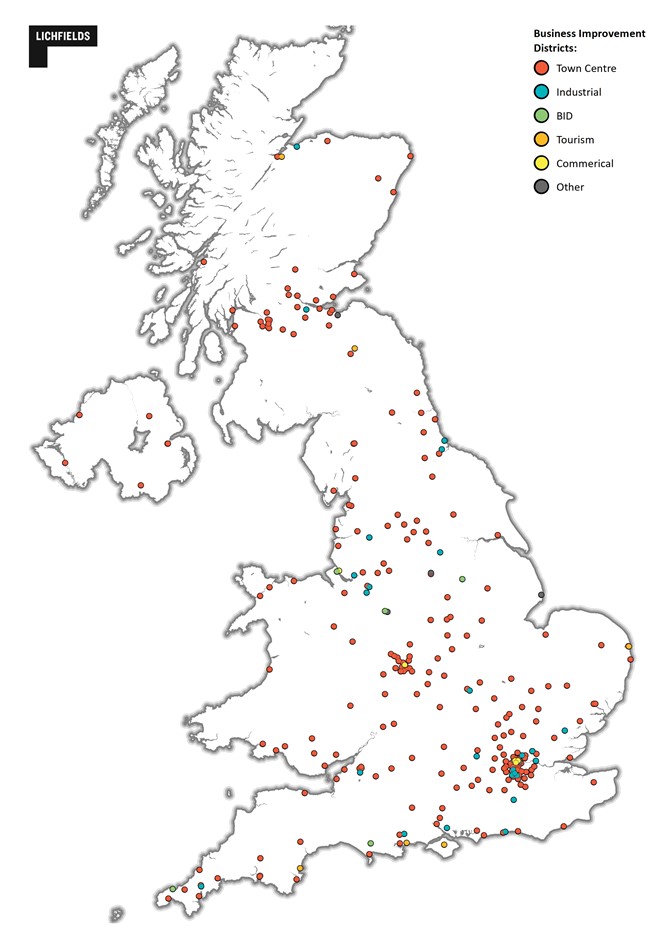 The Capital now accommodates some 50 BIDs, with a particular concentration of town centre-focused BIDs in central London, and some industrial BIDs in Outer London Boroughs. London-based BIDs generate some of the highest levy incomes, for example, London’s New West End Company generated levy payments of over £3.8 million last year.

Given these potential annual levy incomes, BIDs are being increasingly recognised as key drivers of growth and regeneration for town centres. Beyond the traditional ‘basket and bins’ approach of providing flower baskets and waste management, BIDs are now turning their attention to a wider range of place-making interventions. For instance, Lichfields has been working with the Manor Royal BID in Crawley to assess the Business District’s economic impact as well as advising on how Manor Royal can retain its competitive position as a premier business location following a successful ballot renewal in March this year. This includes provision of facilities, wider promotion, enhancements to the public realm and continued efforts by the Manor Royal BID to represent and co-ordinate activities across the Business District. Our final report and set of recommendations can be read here.
Whilst BIDs have continued to grow both in number and economic contribution, this year’s national survey of BIDs identified two emerging challenges of particular relevance to the development sector: the changing nature of retail, and the nature of engagement with the planning system. Besides the large-scale shifts from ‘bricks to clicks’ (a trend towards shopping online rather than in store), BIDs are also experiencing challenges from everyday activities such as safety, security and falling business rates arising from increased vacancy in town centres. To help tackle these issues, the Autumn Budget announced a £675 million Future High Streets Fund, and a High Street Taskforce which will be deployed to help local areas respond to their unique challenges. BIDs will likely play a critical role.
It is also clear that planning remains a central issue for BIDs, with just over 20% of BIDs reporting some involvement with Neighbourhood Planning, indicating much greater scope for involvement. Many BIDs have also strongly lobbied for their local authority to implement Article 4 Directions to prevent the ongoing erosion of office space in town centres, particularly where this has negatively affected the day-time economy and town centre footfall. These issues could be resolved by working more closely with local planners, urban designers and developers and by demonstrating the tangible impact and contribution generated by the BID business community for the local economy.
BIDs have grown quickly in a relatively short period of time, and it is clear that they are here to stay. As an increasingly significant player in local economic growth and town centre revitalisation, they will become an increasingly important stakeholder within planning and economic development; after all, BIDs mean business.

Back to the future for industrial strategy?