As many of you will be aware, the introduction of the National Planning Policy Framework’s (2019) [NPPF] current standard method raised some practical issues for the delivery of housing across the West Midlands. Namely, in many local planning authorities [LPAs], the local housing need figure generated by the current method was lower than adopted Local Plan requirements, and in many instances suggested that these LPAs would be required to deliver fewer homes than had historically been built in those areas. Indeed, one of the main consequences of the current method was that – cumulatively – it would have only boosted the supply of housing by c.6% across the West Midlands region when compared to adopted plan requirements. 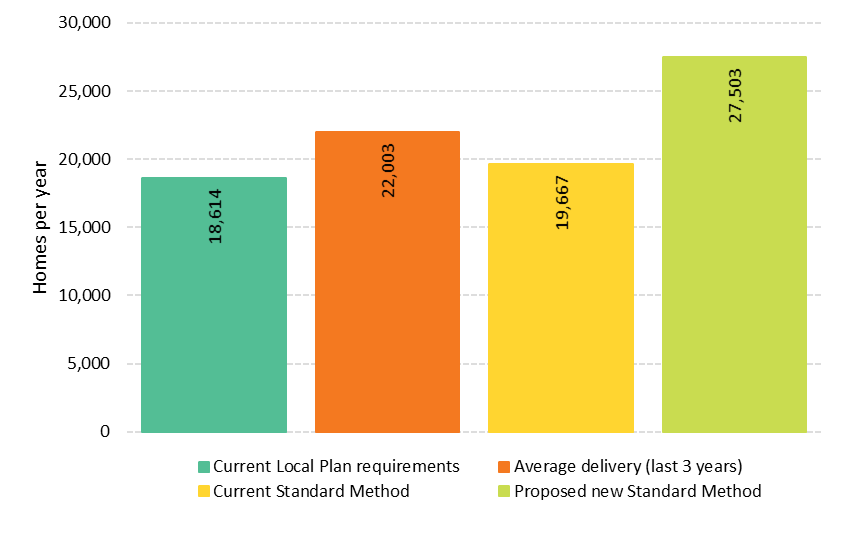 So, what are the implications of the Government’s proposed new method for the West Midlands? Lichfields has set out all the new LHN figures for all the West Midlands LPAs under the proposed new method, along with more detail in respect of the average delivery rates over the past three-years, as well as the current method’s figure for Birmingham & Coventry; and West Midlands (outside of Birmingham & Coventry).
Importantly, nearly 90% of authorities across the West Midlands will see an increase in their LHN figure under the new proposed method. Conversely, four authorities would see a decrease in housing need, compared to the current method – those being Birmingham City, Sandwell, Walsall and Worcester. However, despite these decreases, cumulatively, the West Midlands region would be expected to deliver c.27,503 dpa, a significant 40% boost in the supply by compared to the current method, and a cumulative 25% boost on recent delivery levels across the region.
Figure 1 shows how these needs are distributed spatially across the region when compared to the current method. In general, this shows that the new proposed method would particularly affect the more rural LPAs located around Birmingham, Coventry and Worcester. In particular, the impact is more acute along the southern edge of the region. 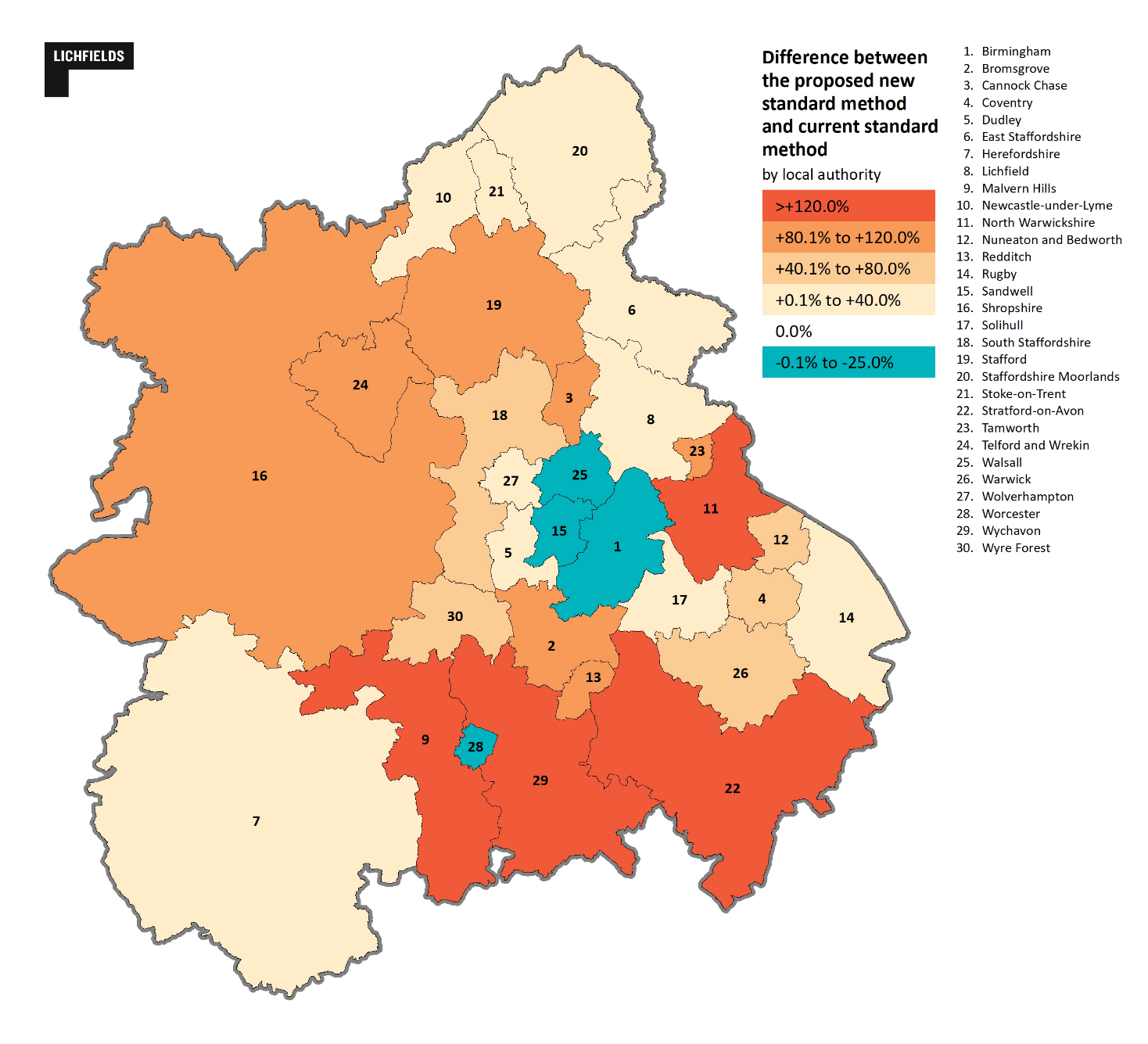 Whilst, the level of increases varies across the region, a majority of authorities would see an increase between 0.1%-40% and 80.1%-120%. However, four authorities would see a dramatic increase in housing need, in excess of 120%. The significant rise in LHN figures across the region is largely a result of the proposed new methods increased emphasis on affordability. Indeed, the proposed new method removes the affordability ‘cap’ which and applies affordability uplifts based the change in the ratio over last 10 years, which has led to significantly higher levels of need across the West Midlands due to the worsening affordability. For a more detailed review of the proposed New Standard Method, click here. 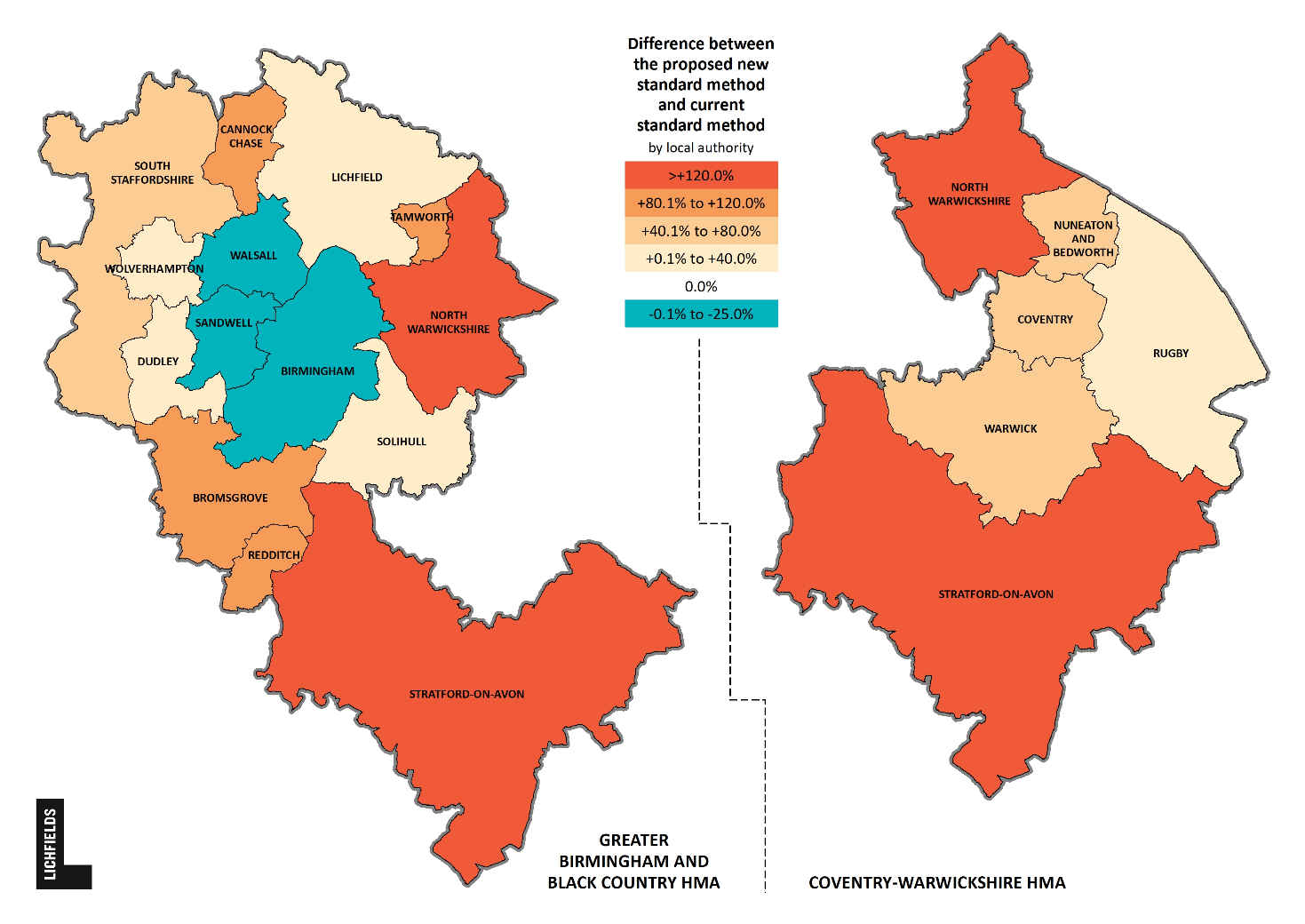 Looking more specifically at the Birmingham and Black Country and Coventry-Warwickshire housing market areas [HMAs], the proposed new method will have some significant implications for plan-making over the next two to three years. 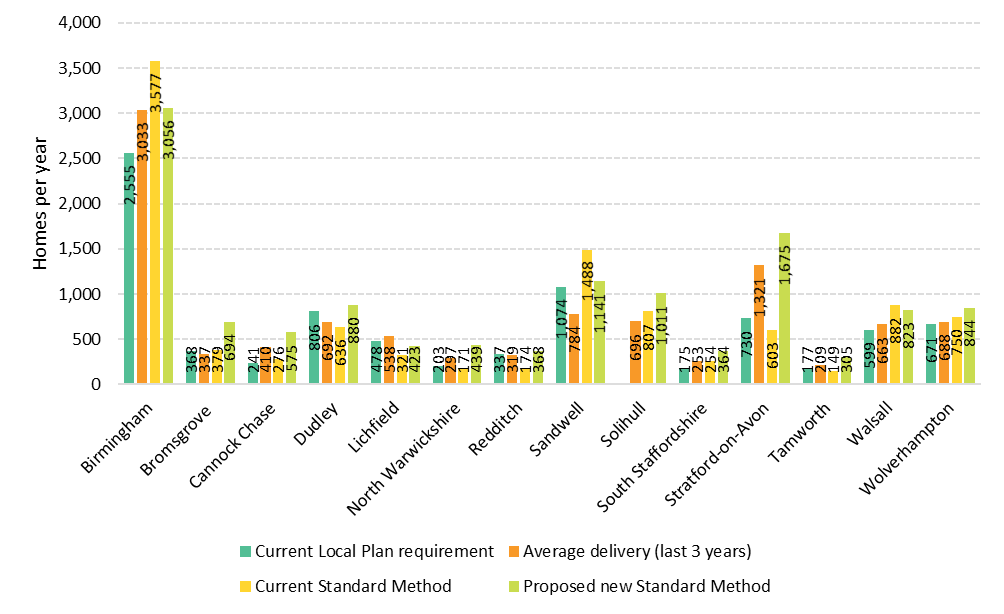 The housing needs of the Greater Birmingham and Black Country HMA [GBBCHMA][1] has been the subject of considerable and complex debate, stretching back to the adoption of Birmingham’s Local Plan in 2017 and beyond.
Indeed, the adoption of Birmingham’s Local Plan quantified Birmingham’s unmet need as c.37,900 dwellings up to 2031. In this context, Birmingham would see a 15% reduction in its housing needs when compared to the current method. Importantly, Birmingham’s new LHN figure would be higher than its adopted Local Plan requirement, and therefore, an element of unmet housing need will likely continue to persist.
Similarly, the Black Country Authorities [BCAs] published the ‘Black Country Urban Capacity Review December 2019’, which identified an c.26,920 dwelling unmet need up to 2038. In this regard, the BCA’s annualised LHN would largely remain the same as under the current method – only -1.8% lower. This suggests that the BCAs emerging unmet housing need up to 2038 is likely to persist, and remain an issue for the GBBCHMA authorities to grapple with, alongside their own needs, through the current raft of Local Plan Reviews.
More broadly, as with the regional trend, a majority of the GBBCHMA would see marked increases in the number of houses they should be planning for under the new proposed method.
Whilst many of the GBBCHMA authorities have begun to progress Local Plan Reviews over the last two years, due to the current COVID-19 crisis delays to plan-making have been inevitable. The consequence of this being that many LPAs may now need to have regard to their new LHN figures as the reignite their plan-making activities, along with making further provisions for any unmet needs arising from the GBBCHMA. Either way the GBBCHMA authorities will collectively need to find land for c.4,186 more homes per year than are planned for in current Local Plans. 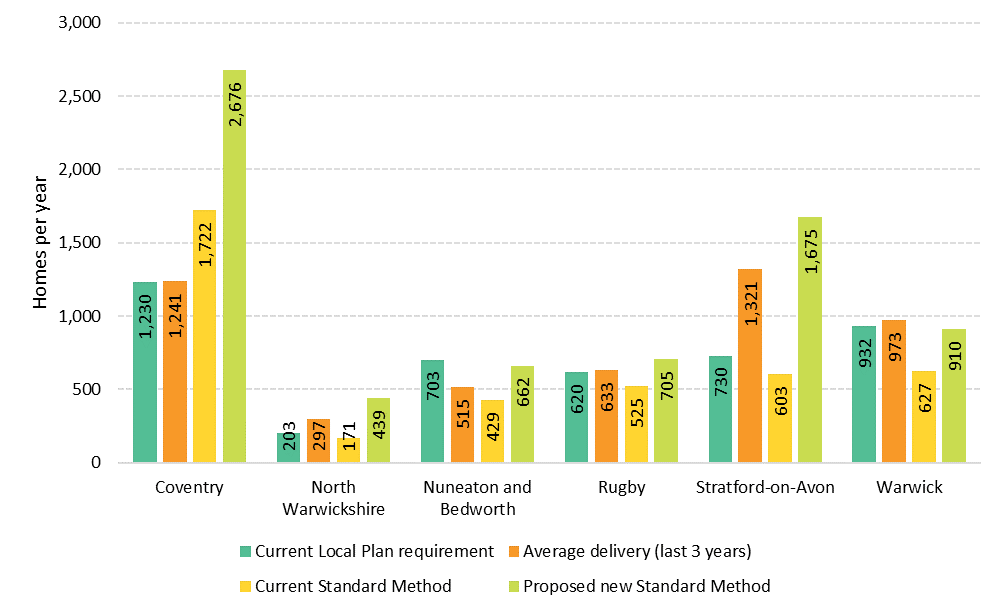 Across the five authorities within Warwickshire which make up the Coventry-Warwickshire HMA,[2] LHN figures would significantly increase under the proposed new standard method. Indeed, in absolute terms, both Coventry and Stratford-on-Avon would see the most dramatic increases when compared to the current method.
For Coventry, this would equate to a 118% increase when compared to the adopted Local Plan requirement, and would even exceed the c.2,120 dpa objectively assessed housing need [OAN] identified in its Strategic Housing Market Assessment[3] – which Coventry were unable to meet. Further still, it would dwarf the level of delivery in Coventry seen over the last three years, and will place further pressures on the surrounding Warwickshire LPAs to accommodate unmet housing needs from the City. Similarly, Stratford-on-Avon’s new LHN figure would be well over double its Local Plan requirement, which included an element of Coventry’s unmet housing needs.
Whilst many LPA’s have recently adopted Plans, the practical implications of these new LHN figures may trigger a need for an early plan review. This is because the Planning Practice Guidance is clear that “there will be occasions where there are significant changes in circumstances which may mean it is necessary to review the relevant strategic policies earlier than the statutory minimum of 5 years.” It goes on to set out that housing need will be considered to have changed significantly where a plan has been adopted prior to the standard method being implemented on the basis of a number significantly below that generated using the standard method.[4]
Consequently, some of the Coventry-Warwickshire LPAs may need to consider whether their Local Plan strategies will require a review, in advance of the statutory five year requirement[4], and wider White Paper reforms; with the exception of perhaps Nuneaton and Bedworth.

The implications for plan-making

The proposed new standard method will have some profound implications for plan making across the region, and will ultimately impact those LPAs who are currently in process of reviewing their Local Plans, which is largely the authorities within the GBBCHMA. However, even those LPAs that have recently adopted Local Plan may, as a result of the proposed new method, need to progress an early review of their Local Plans to ensure that their housing needs are met. That being said, it is the Government’s wider ‘Planning for the Future’ standard method reform, which clearly signals a shift to an approach which favours a ‘policy-on’ housing requirement, which is likely to be more profound for the region.
Nevertheless, the significant increase in housing needs across the West Midlands will inevitably once again raise legitimate and cogent arguments about the availability of brownfield land and the need for Green Belt release, in order to ensure sufficient land is available to deliver the homes that are needed. Consequently, the debate around where such land is to be found, alongside how these needs can be distributed across the West Midlands HMAs, looks set to continue for at least a few more years.
For implications of what the New Standard Method means for other regions, see below perspectives:
London   |   North West   |   Thames Valley   |   South West   |   Yorkshire and The Humber