On the 6th August the Government announced a revision to the standard method for calculating local housing need. The new methodology is out for consultation until 1st October.
Further to our blog which discusses the implications of the revised method at the national level, this blog focusses on what the changes will mean for housing requirements in Yorkshire & The Humber.

The Government’s new method, announced in the document on Changes to the Current System, incorporates stock into the baseline (as well as household projections) to help achieve a ‘fair share’ approach; this approach helps to boost housing numbers in areas with low projections. It also puts a greater emphasis on the uplift for affordability and removes the cap which exists under the current approach, stating it is ‘not compatible’with the aim of boosting housing supply quickly. When aggregated, the proposed changes would result in a need being established for 337,000 homes a year – far higher than the 270,000 under the current approach but no doubt intended to help plans ‘stretch’ for the 300,000 homes a year ambition, in light of some areas not being able to deliver.

The current standard method has been bad news for boosting housing delivery in the north and has resulted in some almost laughably low housing requirement figures for local authorities in the Yorkshire and Humber (“Y&H”) region, including a paltry 12 homes per annum in Richmondshire.
A key aim of the new method is to make it more compatible with the objective of ‘levelling up’ the midlands and north. As discussed in greater detail below, the new method does offer a slight improvement on the current method, however it still results in housing requirements below levels of recent delivery. The new method also continues to concentrate growth in London and the South East, although this will always be the case for a method with such a significant emphasis on affordability (see Figure 1).
Figure 1: Current local plan requirements, recent housing delivery, current standard method and new standard method by region 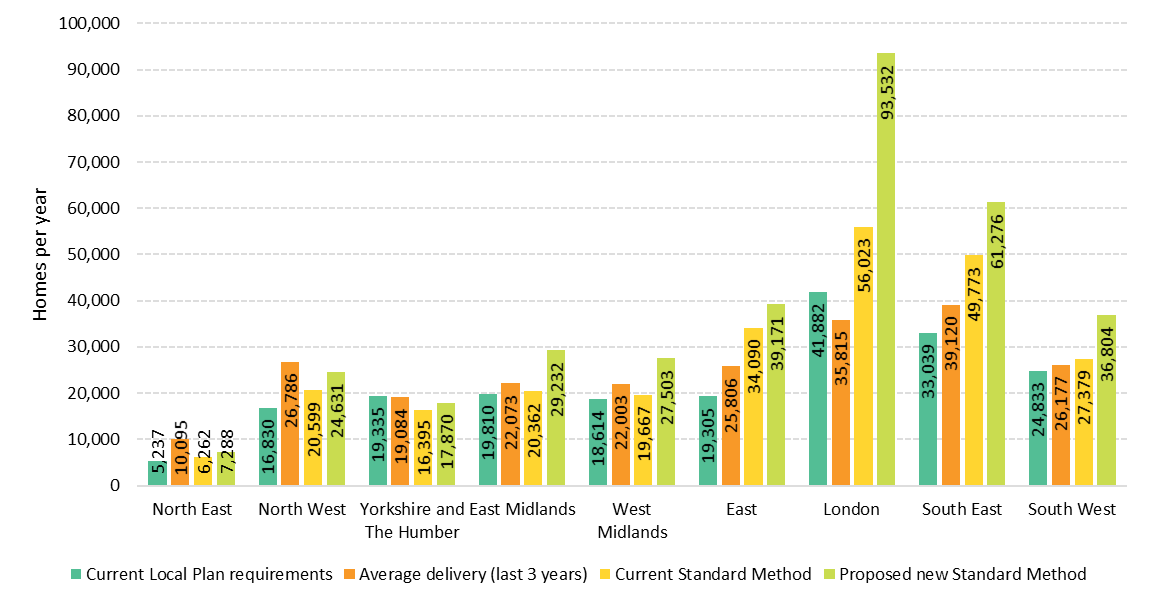 Proposal 4 of the Government’s White Paper proposes to replace the Standard Method for Local Housing Need with a further new standard method which distributes the national target of 300,000 homes, taking into account both need and constraints, removing the need for authorities to debate whether they can meet their need at all. In effect, it will do the balancing exercise to apply the ‘policy off’ estimate of need and review of constraints to arrive at the ‘policy on’ requirement. So, whilst the current proposals will be of significant importance for emerging local plans coming forward over the next 2-3 years – and in five year land supply matters over that time horizon – they may ultimately have a short shelf-life once the third ‘new’ standard method is introduced.

What are the implications for Yorkshire and The Humber?

Although the new method results in an increase in housing requirements across the country, as can be seen in Figure 1, rather than ‘levelling up’, the overall effect is to turn up the heat on London and the south of England with northern regions flatlining or falling below levels of recent delivery.
Y&TH receives the smallest proportionate increase in England, with an increase of just 9% on the current standard method requirement for the region, meanwhile adjoining regions in the North West and North East see increases of 20% and 16% respectively. The 17,870 dwelling annual requirement for the region is also 1,465 dwellings less than the annual requirement set by Local Plans, and 1,214 less than the average annual delivery for the region. Furthermore, the Local Plan annual requirement of 19,335 does not take account of York or Calderdale, which do not have Local Plans in place.
Figure 2: Change in housing requirements from current standard method to new method 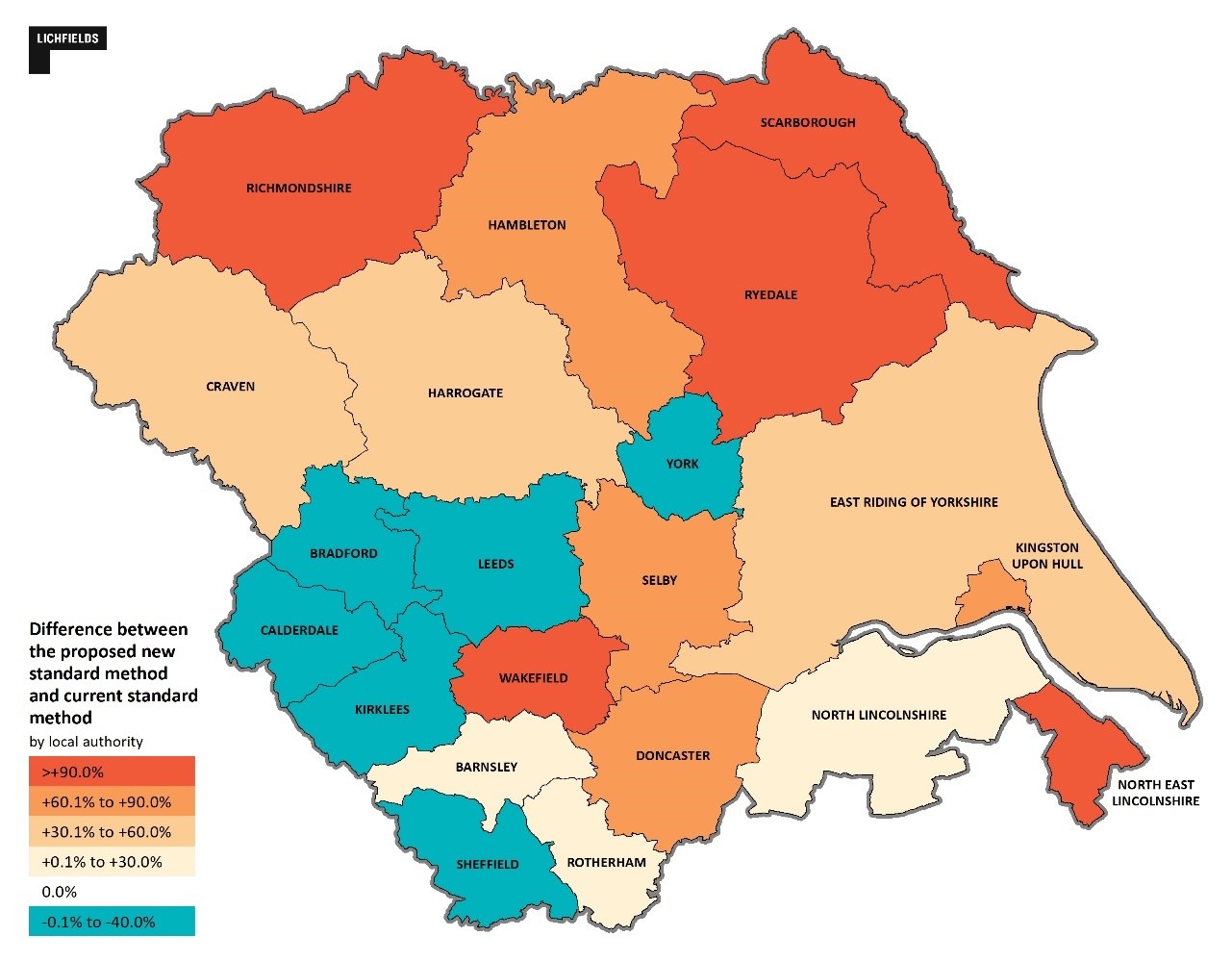 At the local planning authority (“LPA”) level in Y&TH the picture is more varied, with some LPAs seeing a potential increase in requirements and others seeing a decrease (see Figure 2 and Table 1).
Table 1: Yorkshire and The Humber LPA breakdown 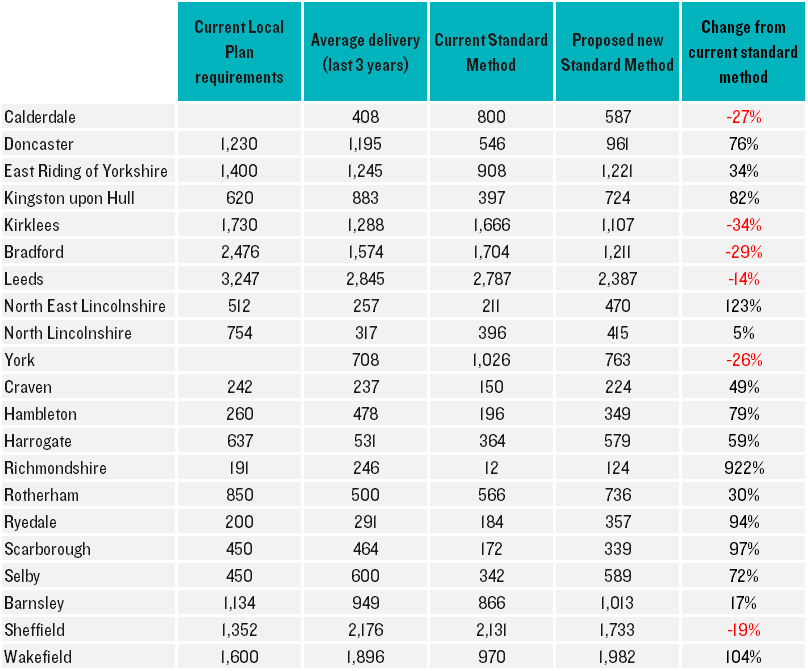 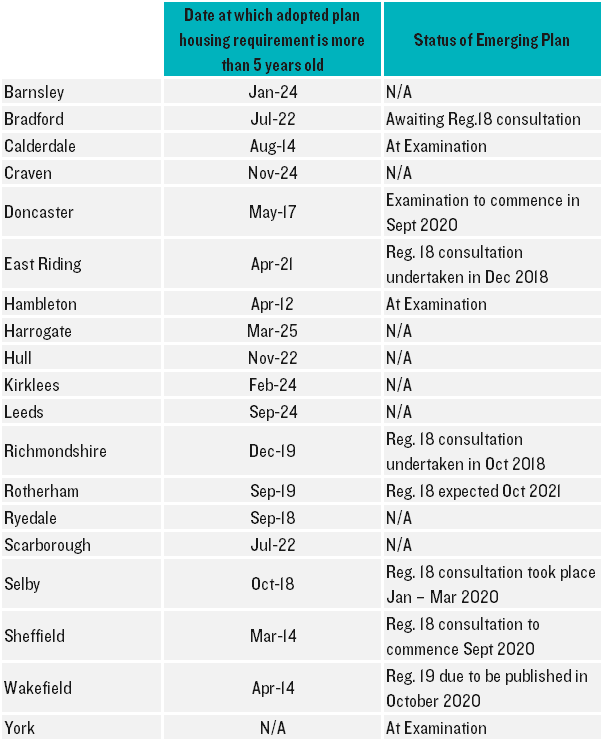 No emerging Local Plans are currently at Regulation 19 stage in the Y&TH region, although a number of LPAs are close to that point and could be at that stage (or close to it) when the revised standard method is published as formal planning guidance by the Government. These LPAs will therefore need to fast track their Local Plan submissions in accordance with the transitional arrangements.
Wakefield in particular could be an authority which presses ahead quickly with its Local Plan submission based on the current standard method, as any delays could see its housing requirement more than double (970 per annum based on the current method versus 1,982 based on the revised method). Conversely, Sheffield could stand to ‘benefit’ (depending on your perspective) from its long delays on its Local Plan production, as it will almost certainly be able to take advantage of the lower figure derived by the revised standard method by prolonging the consultation process.
Figure 3: New standard method compared to current plan requirement 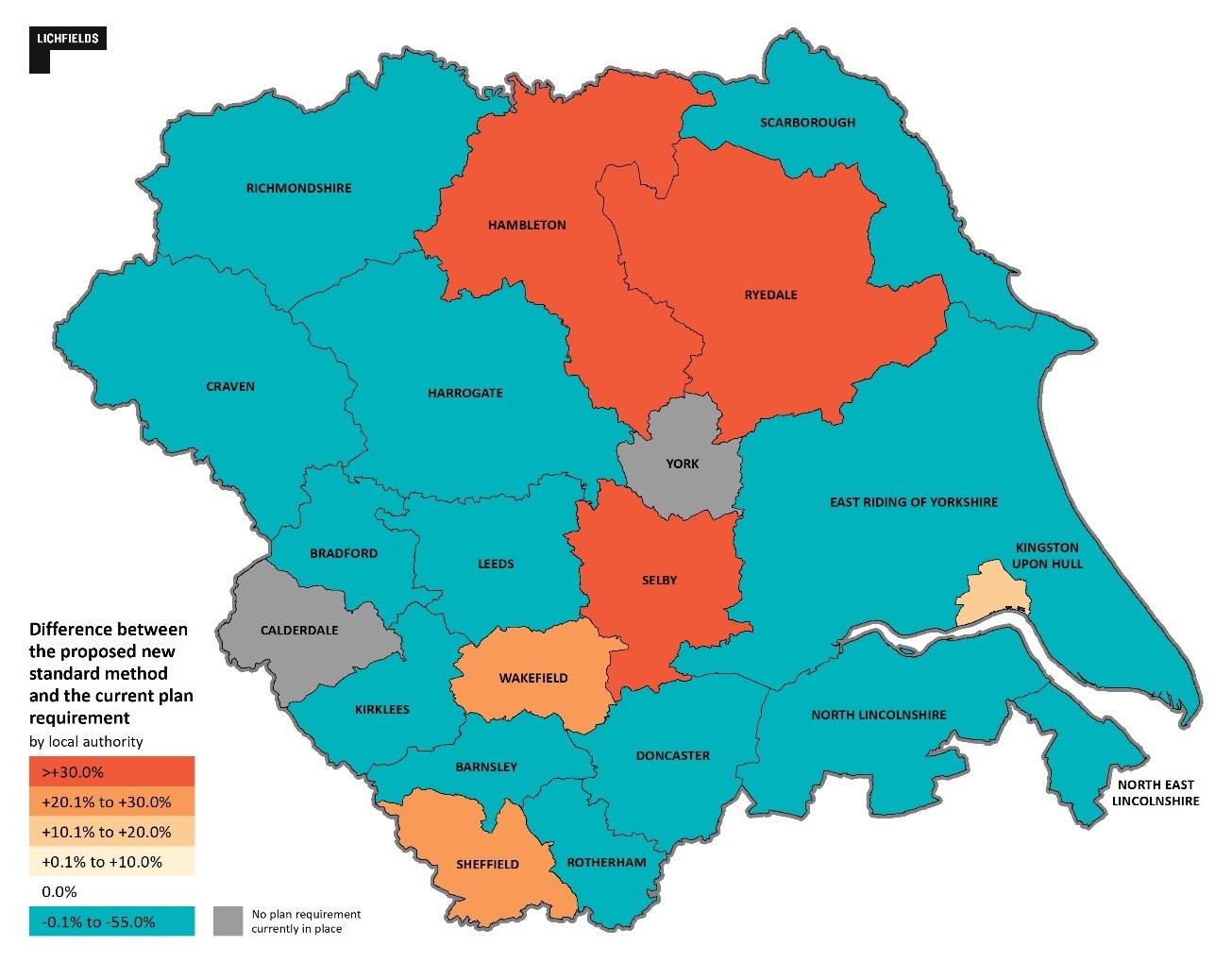 In addition to those LPAs which are currently consulting on emerging Local Plans, the effects of the revised standard method could be felt at any future Local Plan reviews undertaken prior to the wider reforms in the White Paper coming into force. Leeds, for example, is committed to undertaking an early review of its Site Allocations Plan before the end of 2021, and the 14% reduction in the revised standard method requirement could prevent the release of some sites which could have overwise been brought forward.
Furthermore, the revised standard method could prove useful for any developers pursuing 5 year housing land supply cases where the adopted requirement is more than 5 years old, such as Richmondshire, Rotherham and Selby. The reduced requirement in Sheffield will result in the opposite effect for 5 year supply analysis and could indicate benefits to pursuing a 5 year supply case quickly in that LPA, before the revised method is enshrined in formal guidance.
As always, a varied picture across the region but plenty of opportunities for further site promotion.
For implications of what the New Standard Method means for other regions, see below perspectives:
London   |   North West   |   South West   |   Thames Valley   |   West Midlands

[1] Changes to the current planning system: Consultation on changes to planning policy and regulations